In long-awaited performance, Las Fronterizas focus on love in the borderlands 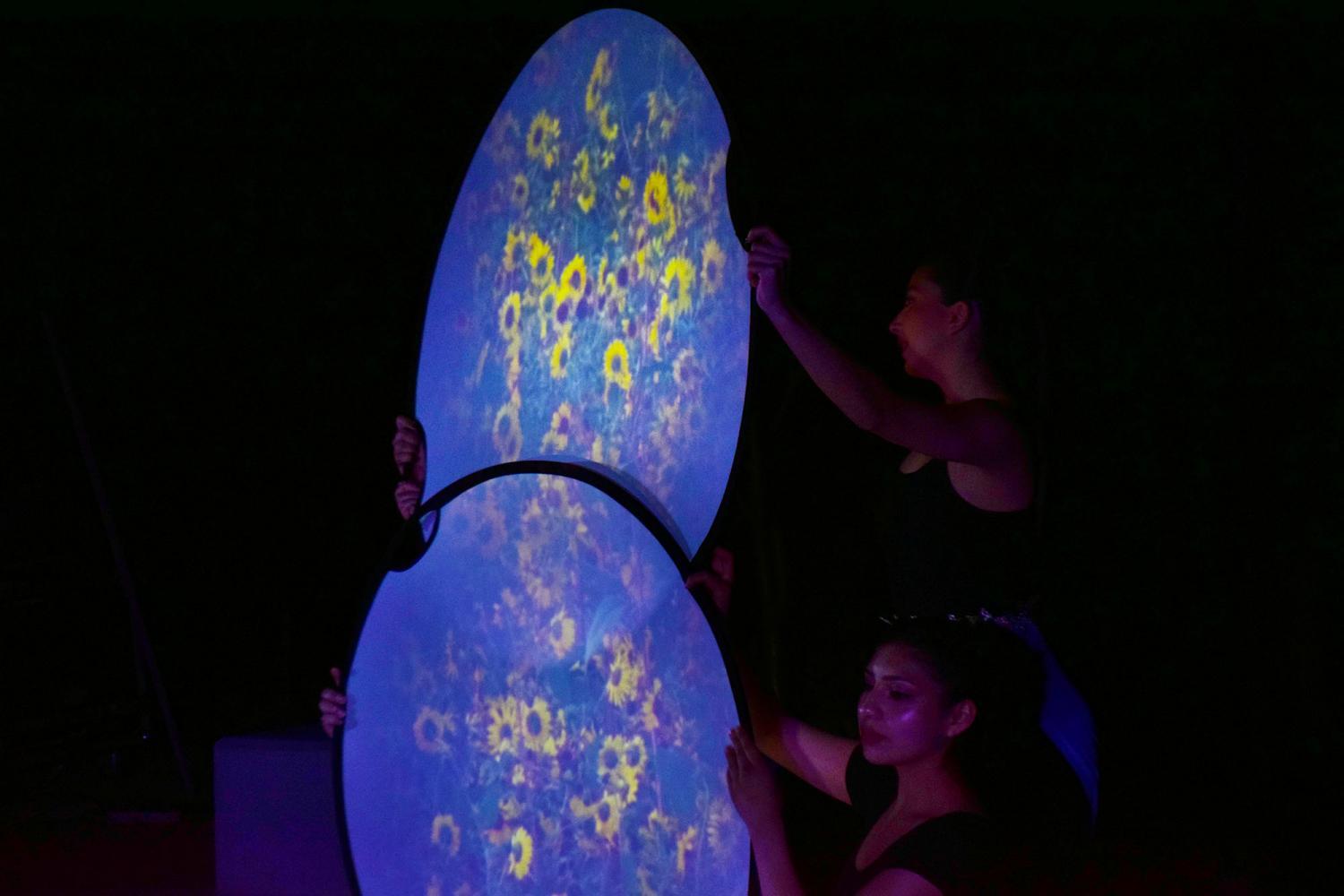 As the sun dipped below the horizon on a cool March evening, performers stood on either side of the border wall in Douglas, Arizona and Agua Prieta, Sonora.

“Mis amores fronterizos,” they chant in unison to audiences on each side of the barrier.

Though separated by the tall bollard fence, the performance is one — with shared music, mirrored movements and the same black-and-white photos of border residents from years past projected on each side of the wall.

This show is a love letter to the borderlanders who inspired it.

“I just hope that they realize that their community is something wonderful,” said Ammi Robles, a member of the six-woman team behind the show known as Las Fronterizas.

“La verdad, es que es un proyecto, that’s really meaningful to us, and to our raíz and our culture as fronterizas,” Ortega said during a dress rehearsal the day before the show.

Ortega, who has roots in Agua Prieta and Phoenix, primarily focuses on theater.

As she spoke, she caught Tovar’s eye, and they started to laugh, noting the way her worlds flow from English to Spanish and back again.

“I speak Spanglish because that’s kind of like the language that we speak here too,” she said. 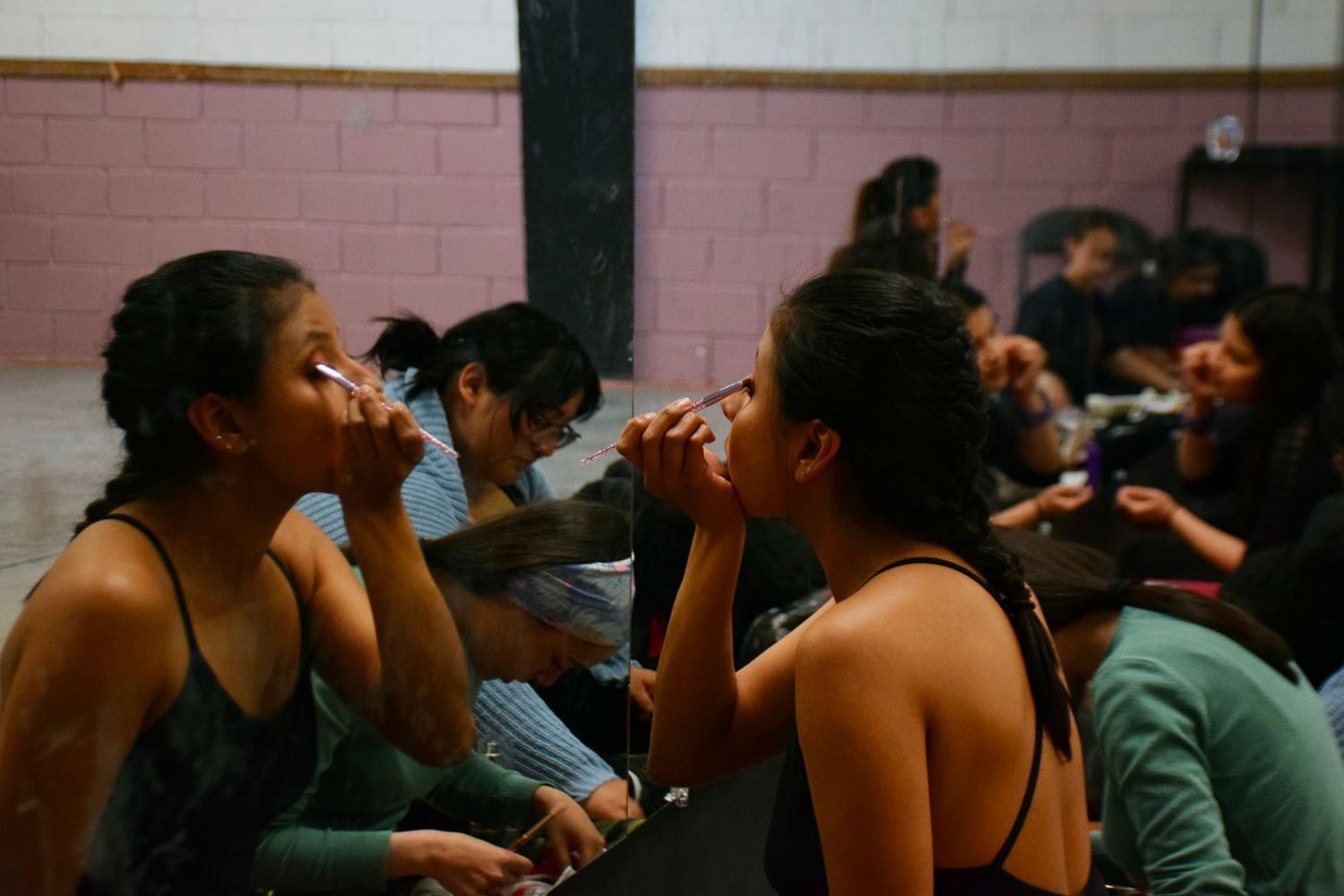 Kendal Blust/KJZZ
América Tovar and other performers get ready before the show.

Understanding, appreciating and accurately representing that unique borderland culture is at the heart of what Las Fronterizas are trying to do.

“We want to amplify the voices of the border community, and let people know the love that also lives here,” Ortega said. “People don’t really know what it’s like. All they hear is the bad stories.”

Outside portrayals of her community often focus only on a narrow subset of issues: drugs, cartels, migration, hardship, she said. Just this week, a candidate for governor in Arizona called the border a “war zone.”

“That is a world that’s been brought to me,” said Jenea Sanchez, a multidisciplinary artist and director of the Douglas-based Border Arts Corridor. “And you cannot help but feel this visceral sentiment that bubbles up when individuals speak to a place that is so full of richness and multiculturalism, openness.”

She acknowledges that there are serious issues in the borderlands. In fact, they show up in Las Fronterizas’ performance, but with great care not to overshadow the richness of border life.

“It’s something wonderful to have two cultures at the same time. Someone talking in two languages at the same time. Different accents. Having the ability to be in one country in one minute and being in another country in the next minute,” said Robles, who mostly grew up in Agua Prieta and considers herself to be from both sides of the border. “I want people to see the borderlands also as a place of unity, love, prosperity.”

From the outset, Las Fronterizas knew their work would center the voices of Douglas-Agua Prieta residents.

The team carried out dozens of interviews with community members — catching people on the street, at school or as they waited in line to cross the border. Then they worked with about 35 local artists to turn those interviews into a performance scheduled for March 2020.

“We initially wanted to center love stories,” said Yvonne Montoya, a choreographer based in Tucson. “We had all the concepts to show and the ideas ready to go. And then the pandemic happened.” 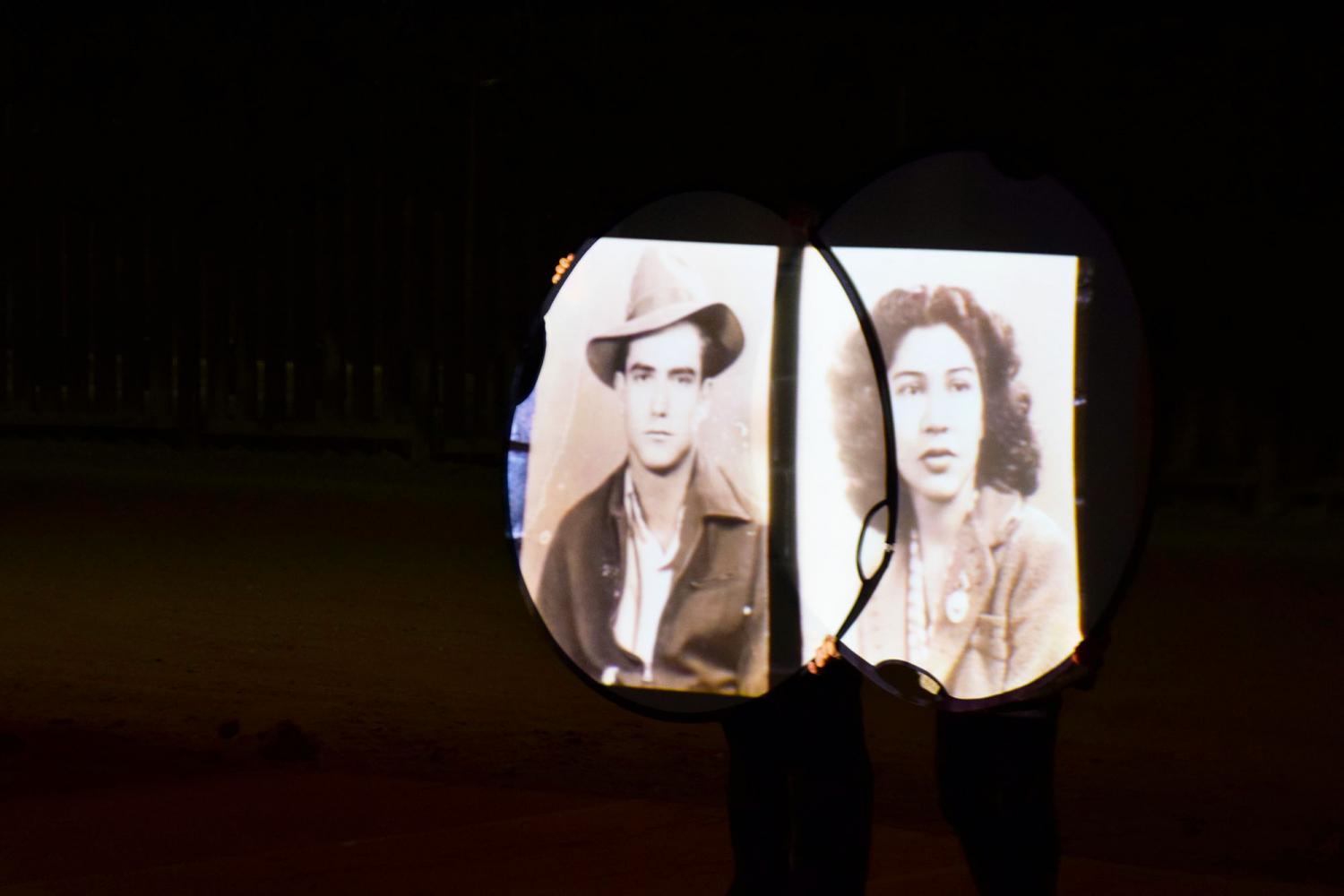 Kendal Blust/KJZZ
Old black-and-white photos are projected onto reflectors in Douglas as part of the show "Mis Amores Fronterizos."

“It was like we took plans we’d made for March 2020 and we grabbed them up and threw them in the trash,” said América Tovar, a dancer from Agua Prieta.

They had to start over, but this time unable even to be in the same room.

“I think that was a huge challenge for us,” she said.

Las Fronterizas had always been about unity. Now, they connected only via a computer screen as they tried to salvage their show.

The borderlands were hit hard by the pandemic, and by border travel restrictions that soon followed, separating many in Mexico from family, friends and their normal way of life.

“I couldn’t cross to my other town, Douglas, for almost two years,” said Robles. “My sister lives in Yuma, so I couldn’t see her for all that time. So it was hard, because I felt like they took away half of me, if that makes sense. I don’t want to be dramatic. But that’s how it felt.”

After months of separation, grief, sickness and loss, the artists said it didn’t make sense to put on the same show they had created before the pandemic. So, they made a new one, still based on the theme of love, but delving into the past, present and future of life in Douglas and Agua Prieta.

Two years later than scheduled, they performed “Mis Amores Fronterizos,” my borderland loves, honoring those who were lost and celebrating coming together again.

“It’s like that compromiso,” Sanchez said. “We want to follow through with what we promised our collaborators and community members. We see it was returning a gift.” 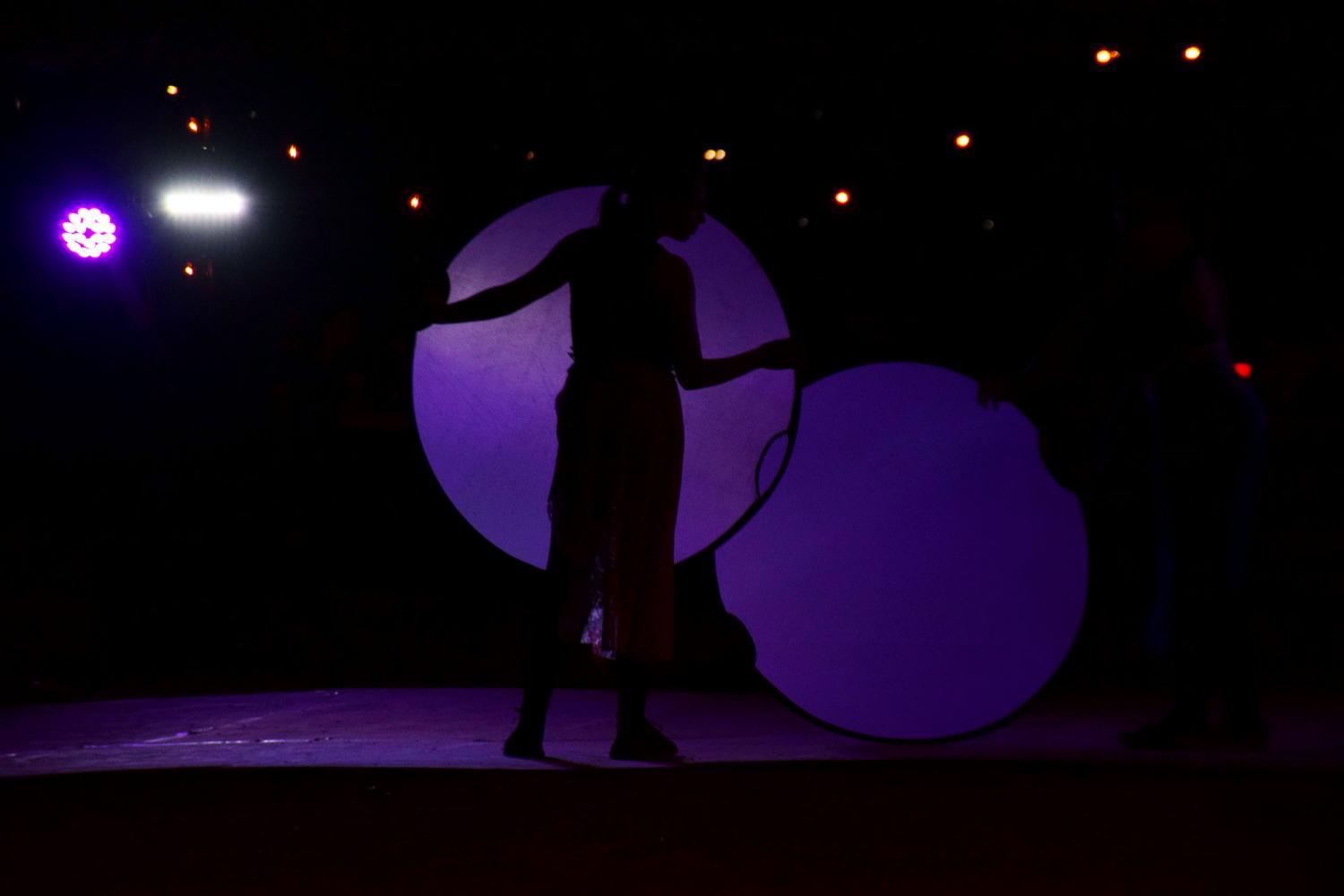 Kendal Blust/KJZZ
Dancers hold up reflectors so the audience in Douglas can see projections more clearly.

“There’s a lot of love letters that all of you wrote, so we’re going to read them. Las vamos a leer, a ver qué pasa,” Ortega’s voice rang out on both sides of the border near the end of the performance.

At the beginning of the show, more than 100 audience members seated around 12 tables on each side of the wall, wrote each other letters about what they wanted for their community.

“Two countries. One city, community. We will confront the challenges in our community with solidarity. What affects one, affects us all. I hope a wall won’t divide us.”

“There’s something I think really powerful about coming to a space that’s designed to separate people and to treat it as a space that is for the purpose of bringing people together,” said Xanthia Walker, one of las Fronterizas and a theater artist in Phoenix.

Mounting a show at the border wall is a logistical challenge, particularly on the U.S. side where performers aren’t allowed within 60 feet of the border fence. But, Walker said, it’s worth it.

“We can create these moments when the fence kind of disappears, and you see your neighbor genuinely and wholly,” she said. 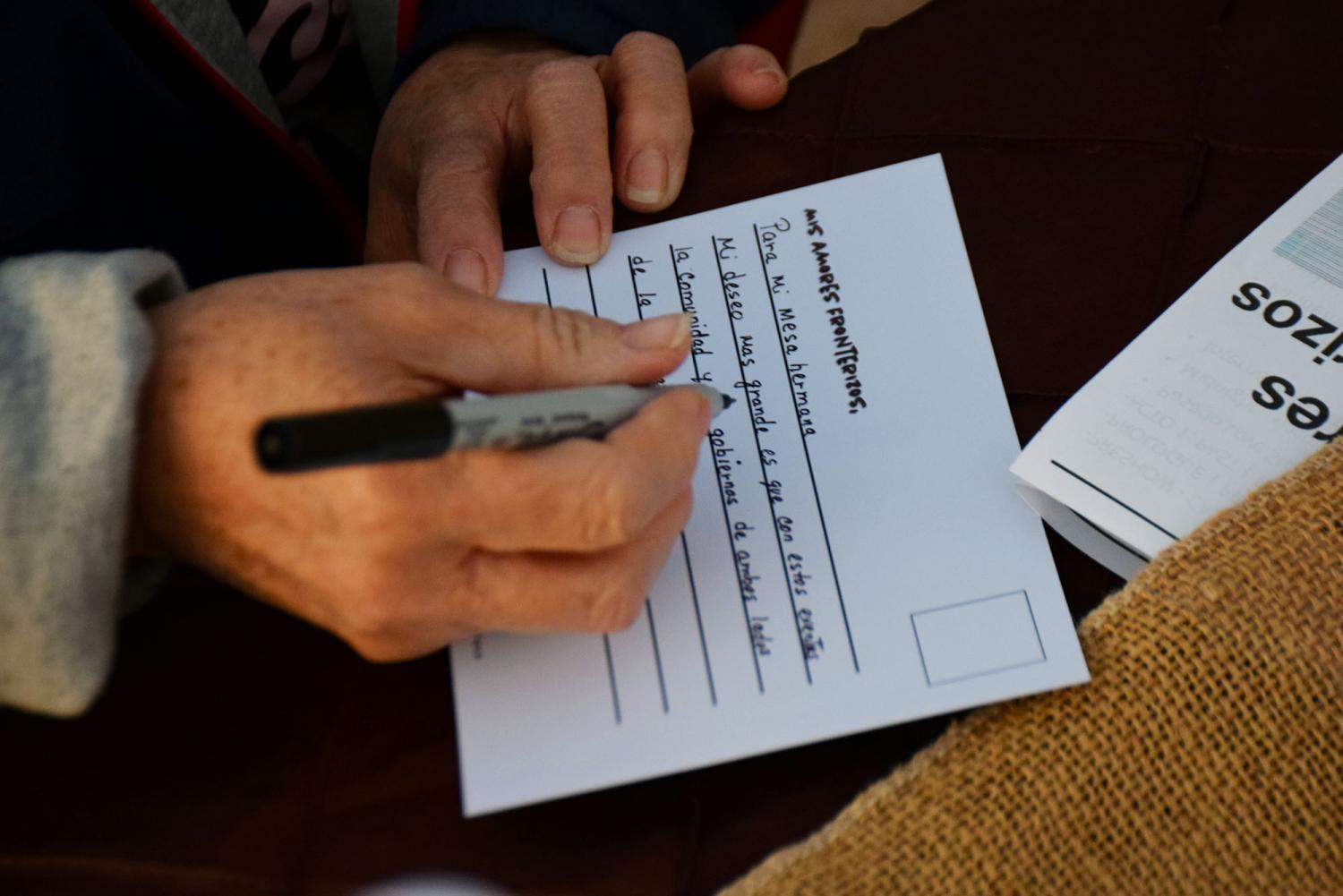 Kendal Blust/KJZZ
A woman in Douglas writes a letter to someone at a corresponding table across the border in Agua Prieta, Sonora, during a performance of "Mis Amores Fronterizos" on March 12, 2022.

‘Las Fronterizas is a forever thing’

As the show wrapped up, performers on each side of the border interpreted dances meant as a gift for their communities. But the artists say they’ve gained as much as they’ve given.

“For me, this project has been so significant,” said Tovar. “I live in a bubble, and when I started to hear these stories, I realized what Agua Prieta really is, and what Douglas really is.”

Despite having lived her entire life at the border, she said creating this show opened her eyes to other points of view and taught her more about the deep love in the borderlands.

“We’re really are just one community. We share so much,” she said.

Like the other Fronterizas, she hopes to continue telling borderland stories — perhaps in other communities along the U.S.-Mexico border, or at other borders around the world.

Ortega put it simply: “Las Fronterizas is a forever thing.”

And their work is far from over. 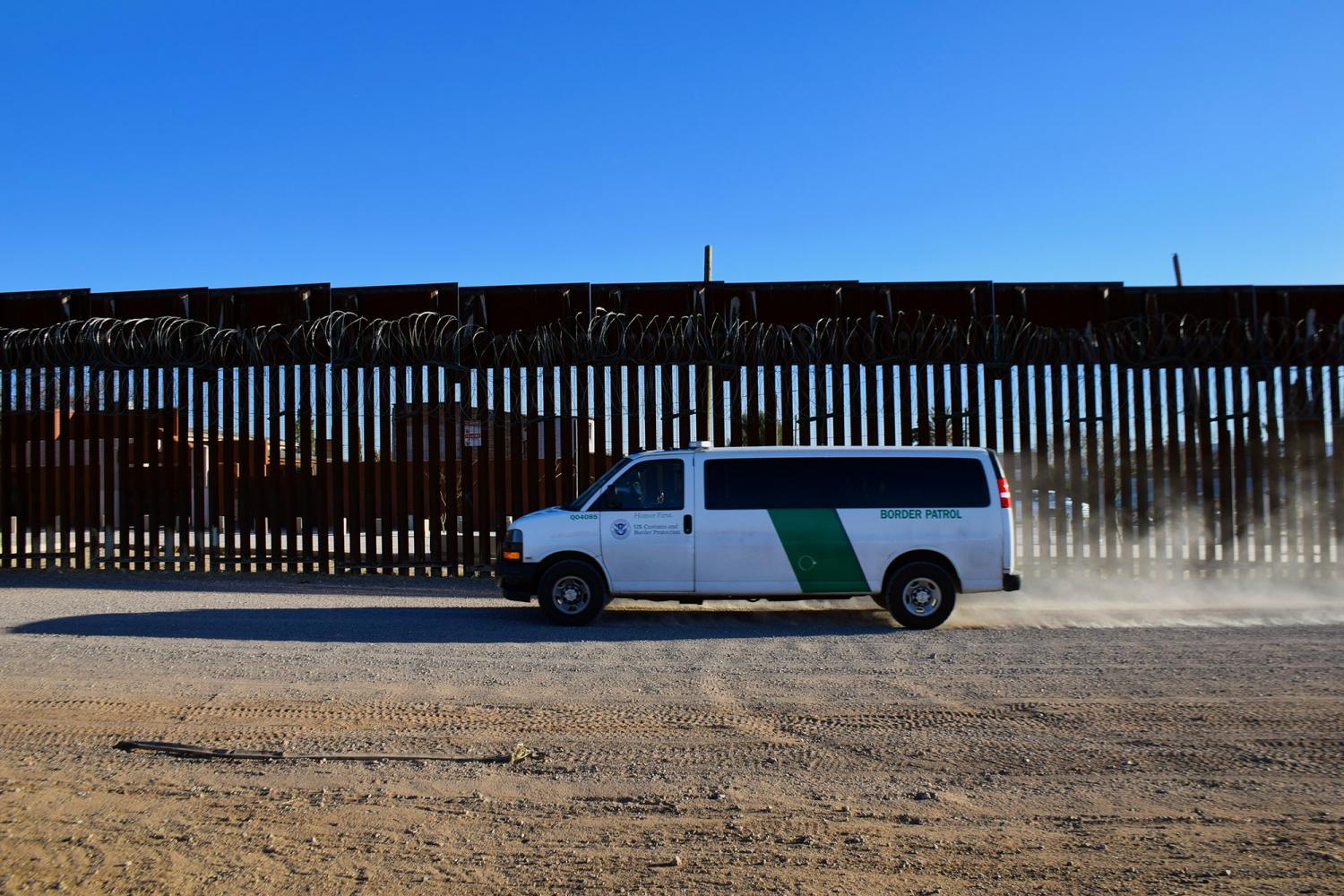 Kendal Blust/KJZZ
A Border Patrol Vehicle drives in front of the border fence where a performance of "Mis Amores Fronterizas" is about to begin. 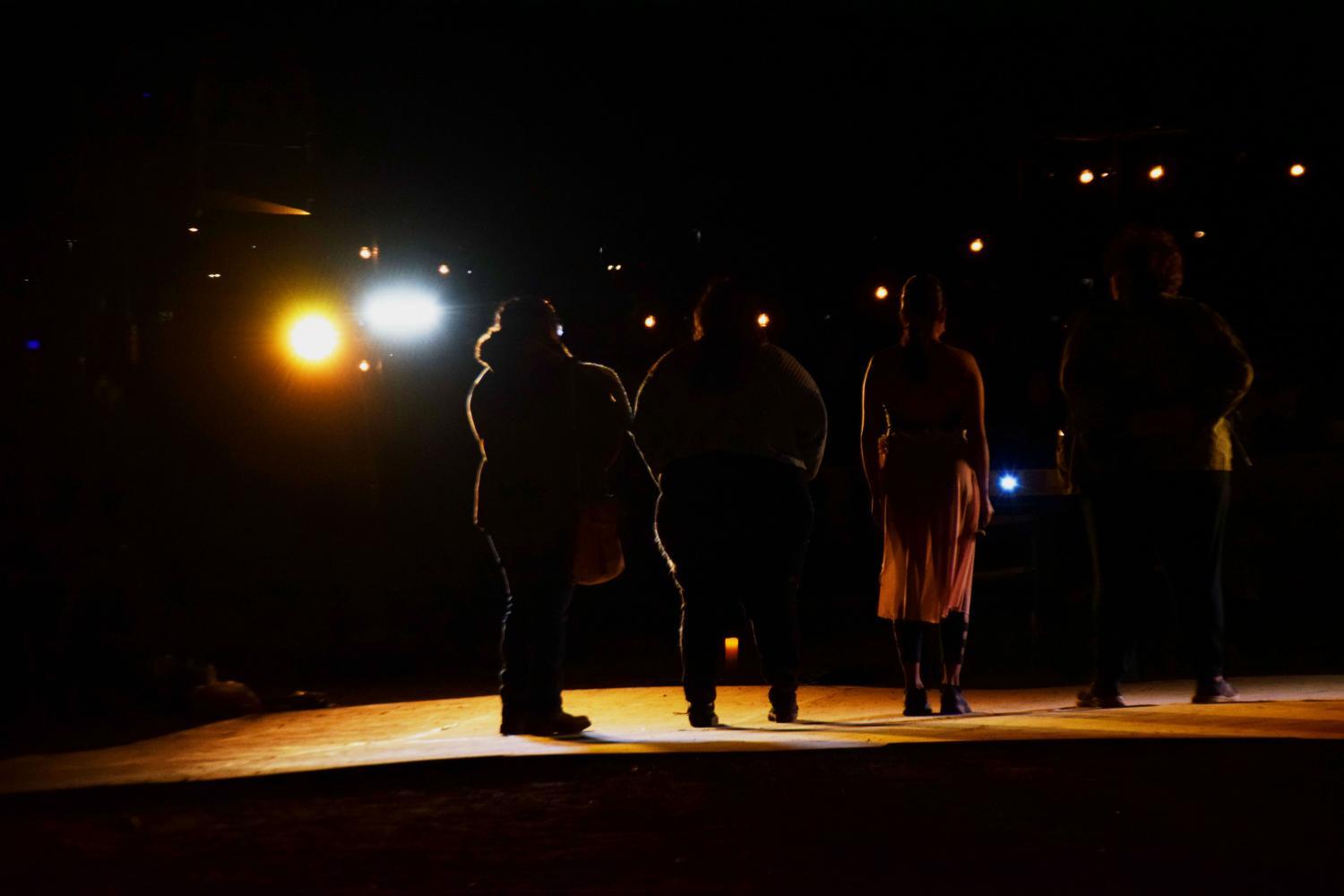 Kendal Blust/KJZZ
Las Fronterizas come on stage at the end of the show in Douglas, Arizona. 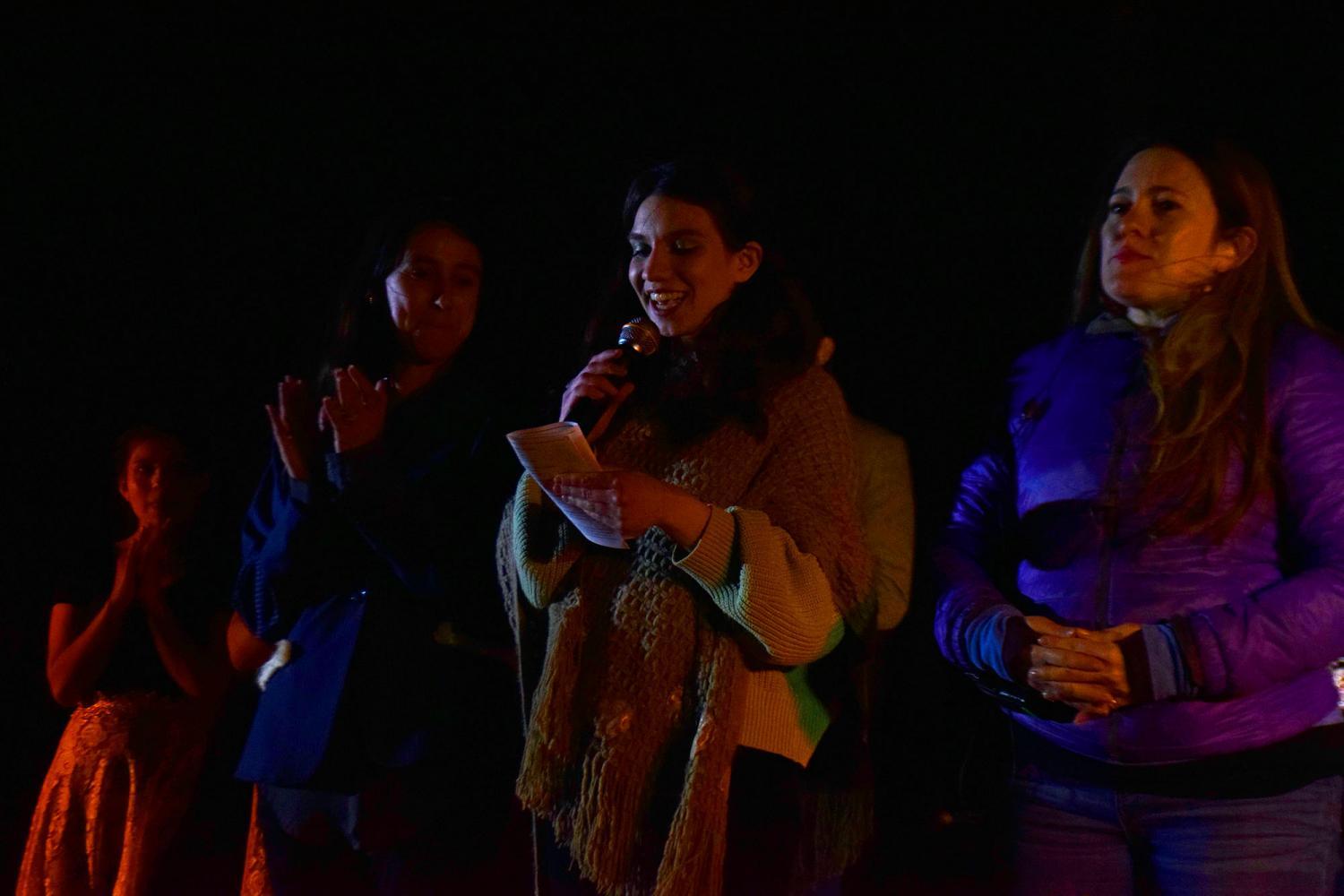 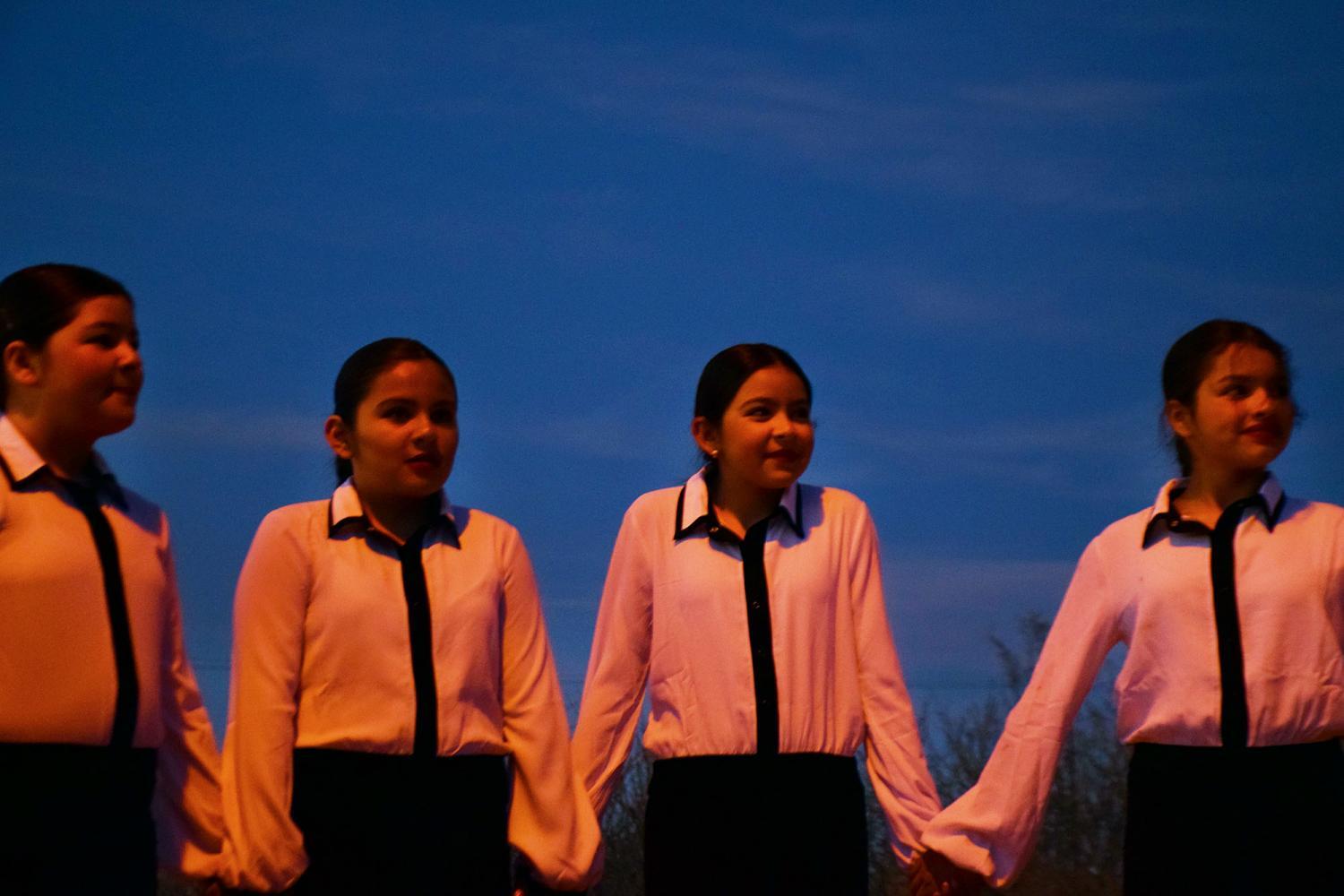 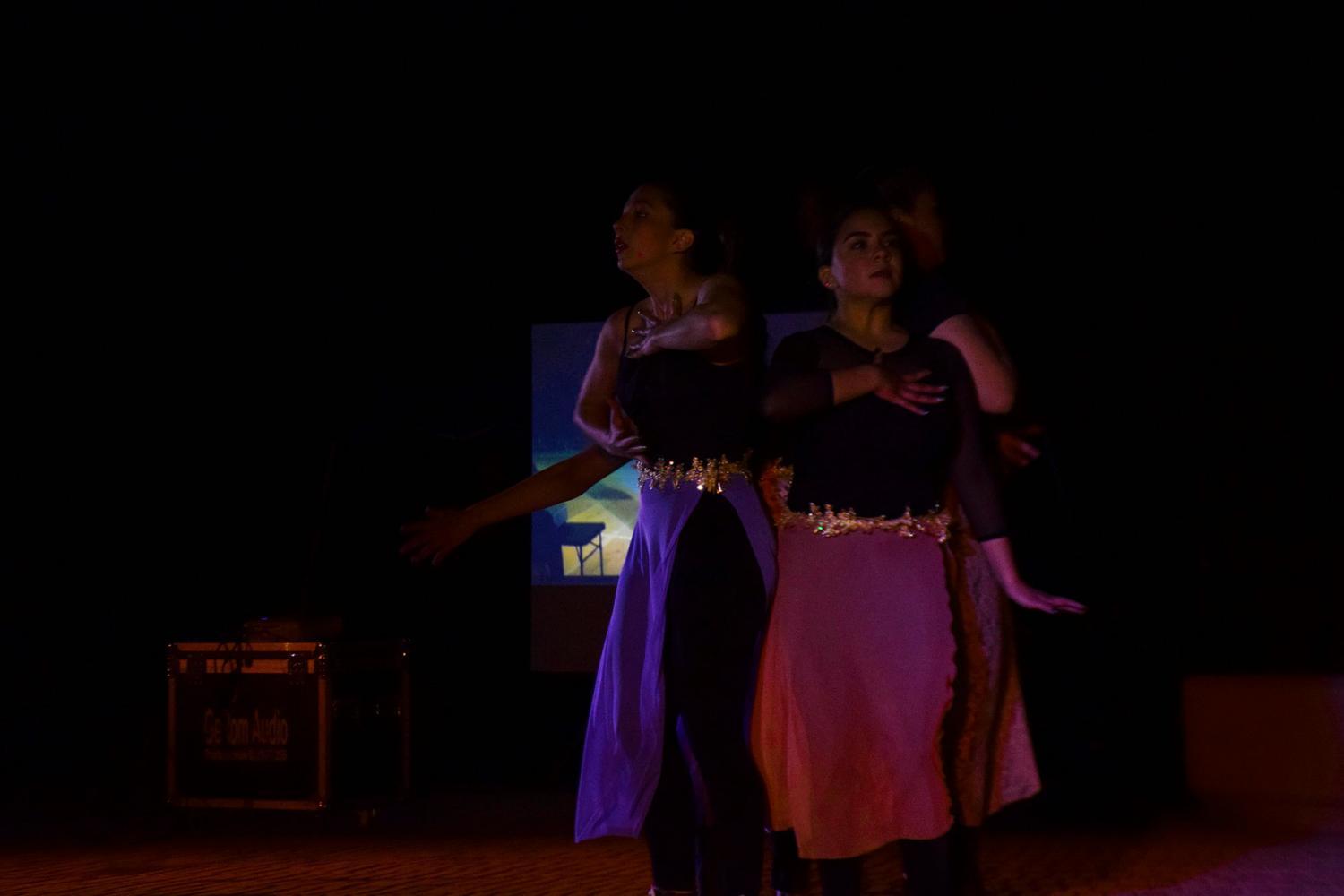 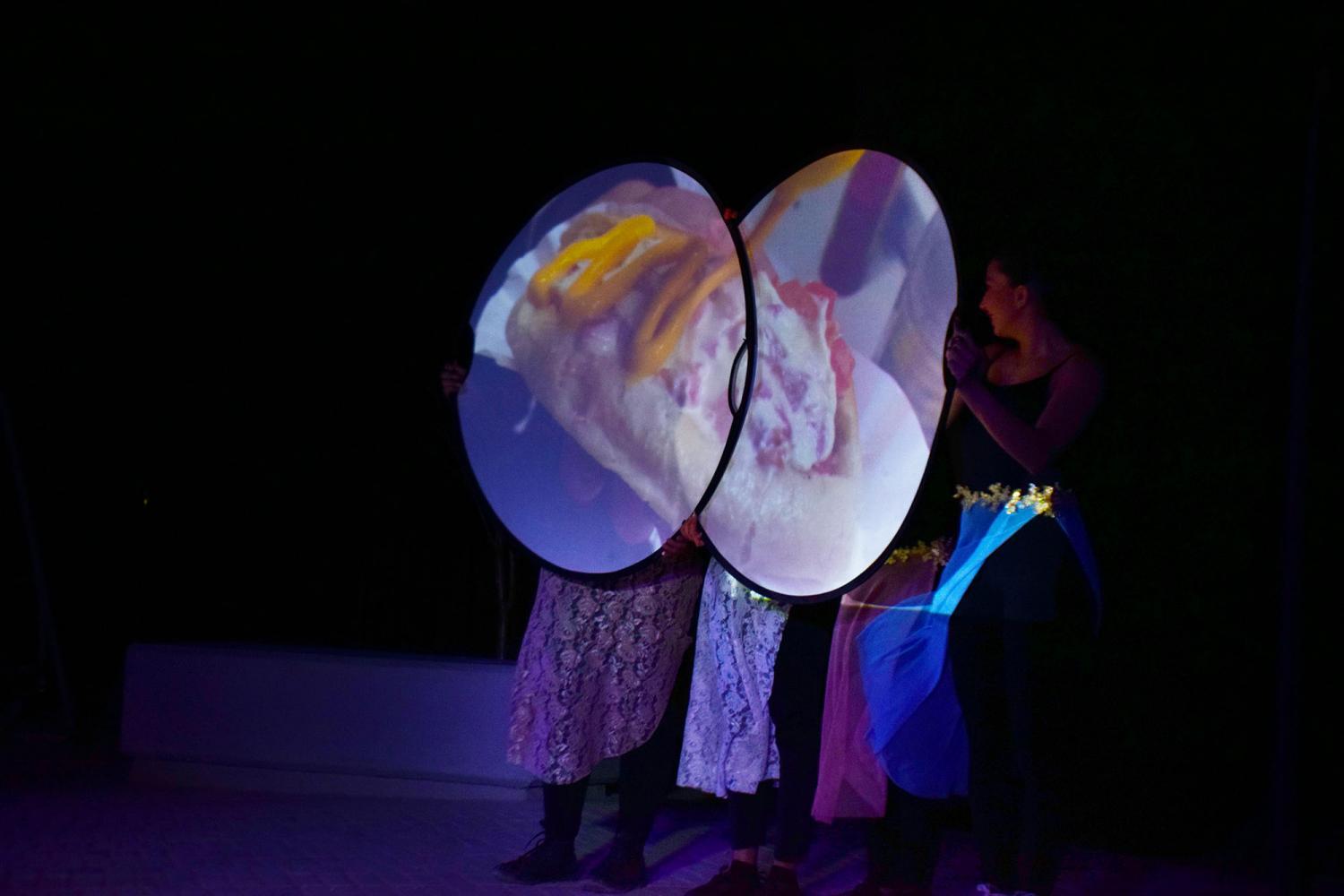 Kendal Blust/KJZZ
Dancers hold up reflectors so the audience in Agua Prieta can see projected images. 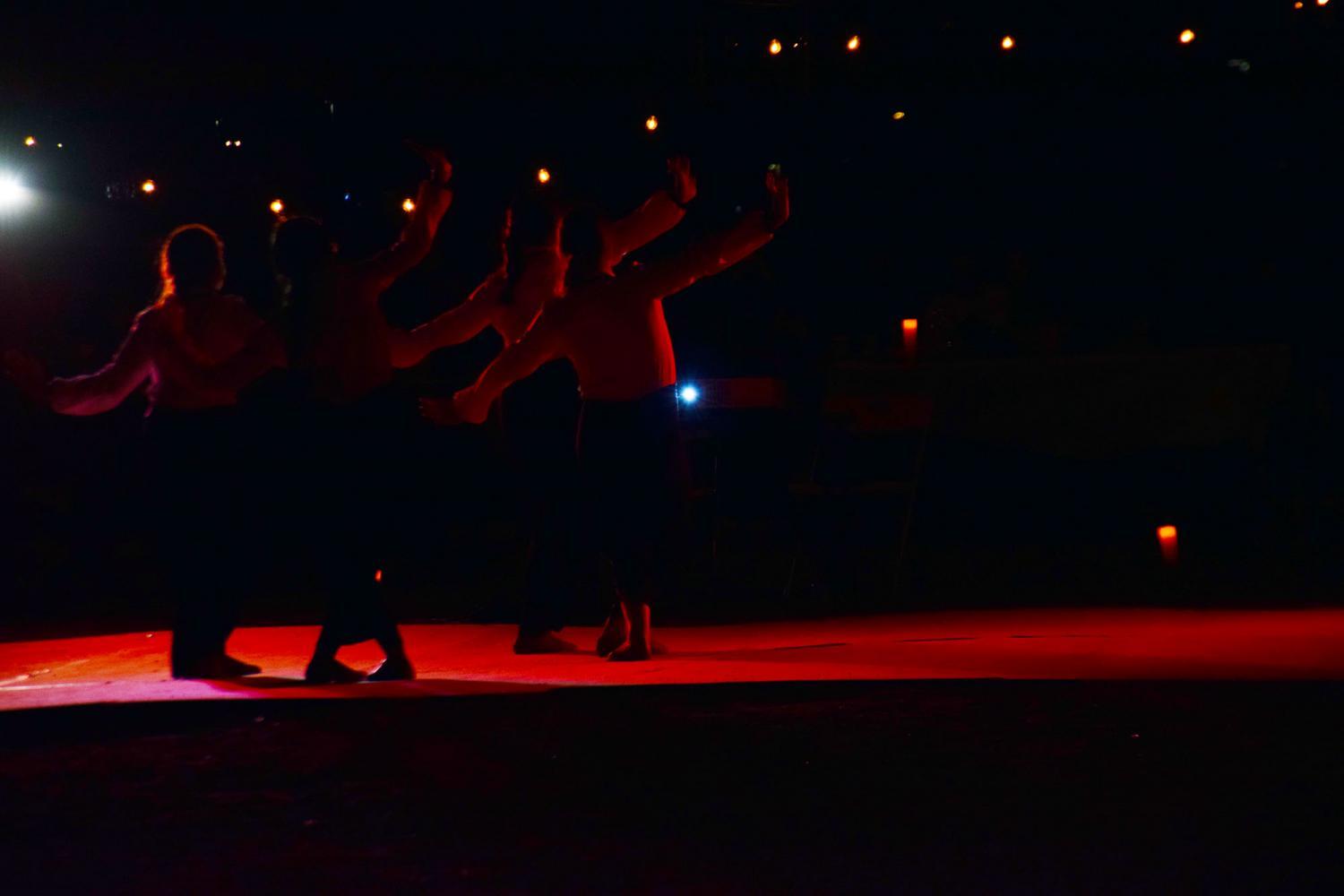