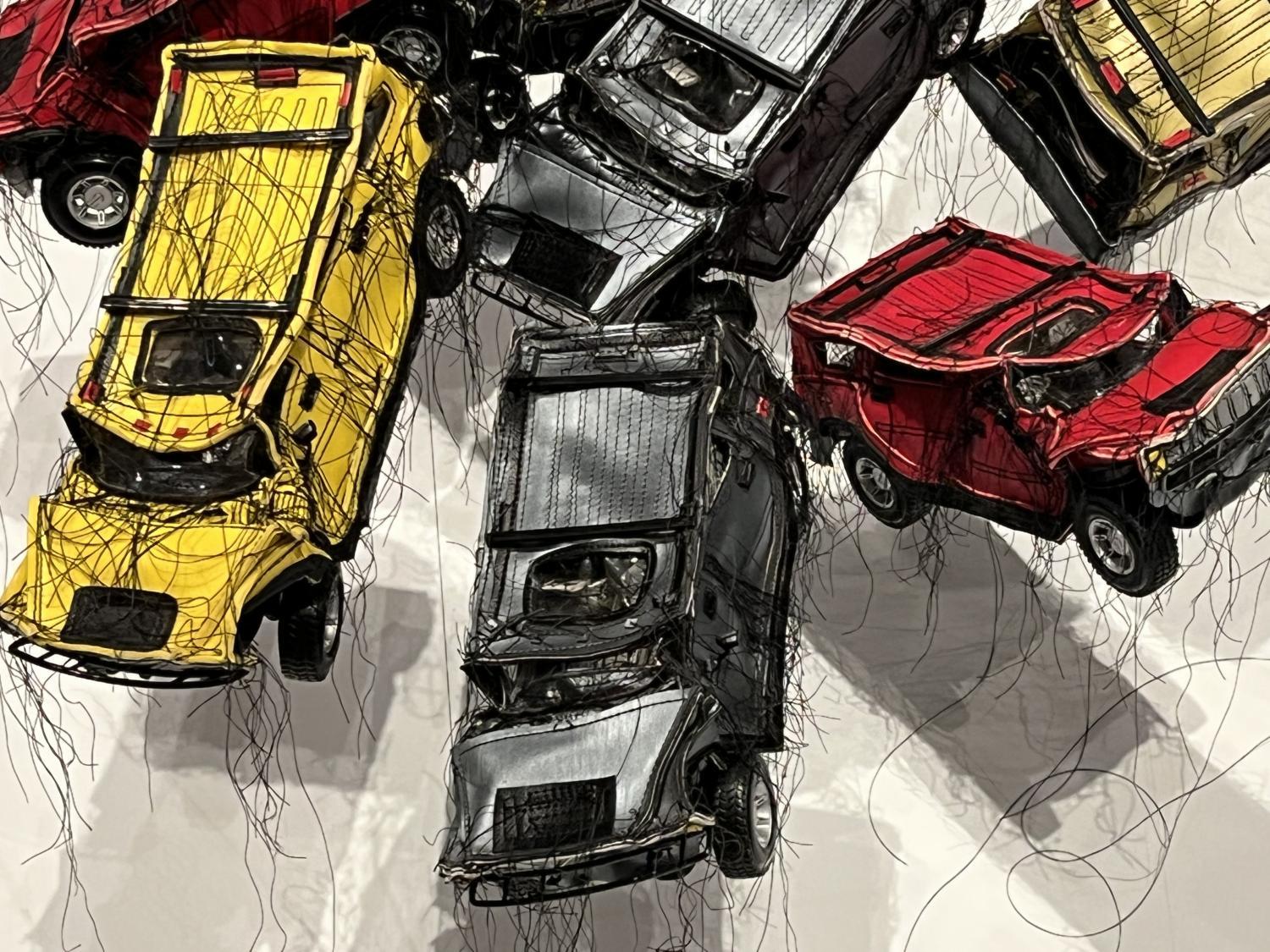 Tom Maxedon/KJZZ
Margarita Cabrera's "Agua que no has de beber dejala correr (Water That You Should Not Drink, Let It Run)" is part of a new exhibit at Phoenix Art Museum called "Desert Rider."

A new exhibit at Phoenix Art Museum called “Desert Rider” highlights a diverse display of art by Latinx and Indigenous artists of the Southwest.

A stunning display of small H3 Hummers made from fabric and laboriously stitched together occupies a prominent space at the entrance to the gallery.

Artist Margarita Cabrera created and assembled all the parts for the model vehicles.

“I hand-sewed everything with needles and machines. You can see the interior of all the hummers so you can get very close, and I have the seats, the dash in the front. You’ve got the buttons, the wheel, all of these different components,” she said.

The dozens of vehicles cascade from the ceiling in a stabile resembling a snapshot of a tornado. 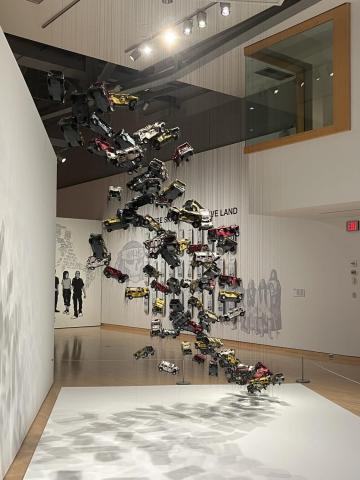 Tom Maxedon/KJZZ
Artist Margarita Cabrera created and assembled all the parts for the model vehicles.

Cabrera said the inspiration for this massive work is a critique of maquiladoras, or factories, that provide vehicle components and other products at a cheaper cost in Mexico than those made in the U.S. These factories often employ and exploit young women with cheap wages and toxic work environments.

“We are a talking about a community of immigrants that come from the interior of Mexico, different indigenous communities that are dealing with poverty, dealing with violence and who are coming to the north of the country right up to the border and are in very vulnerable positions cornered into this cheap labor force,” she said.

Nearby is the work of José Villalobos who combines his interest in Vaquero culture with his identification as queer.

“A lot of my work is about deconstructing toxic masculinity within the Latinx culture. Furthermore, I start to get into subcultures as well. These saddles came from an inspiration from my father, a mechanic who was a big part of riding horses and lived on a ranch,” Villalobos said.

Across the gallery on the opposite wall is the work of Apache artist Douglas Miles, who founded Apache Skateboards 20 years ago.

He said his recognition there were and are very few Native American people working in the skateboarding industry led him to create his own company.

“Why am I not included in these scenarios? Why? So, I thought to myself, ‘well, I’ll just include myself. I’ll make it myself. I’ll make my own brand. I’ll create my own skate team. We’ll shoot our own films and we’ll put it out there for the world to enjoy,’” he said.

Miles’ work furthers the theme of the entire exhibit as an examination of transportation, landscape and identity in the desert. 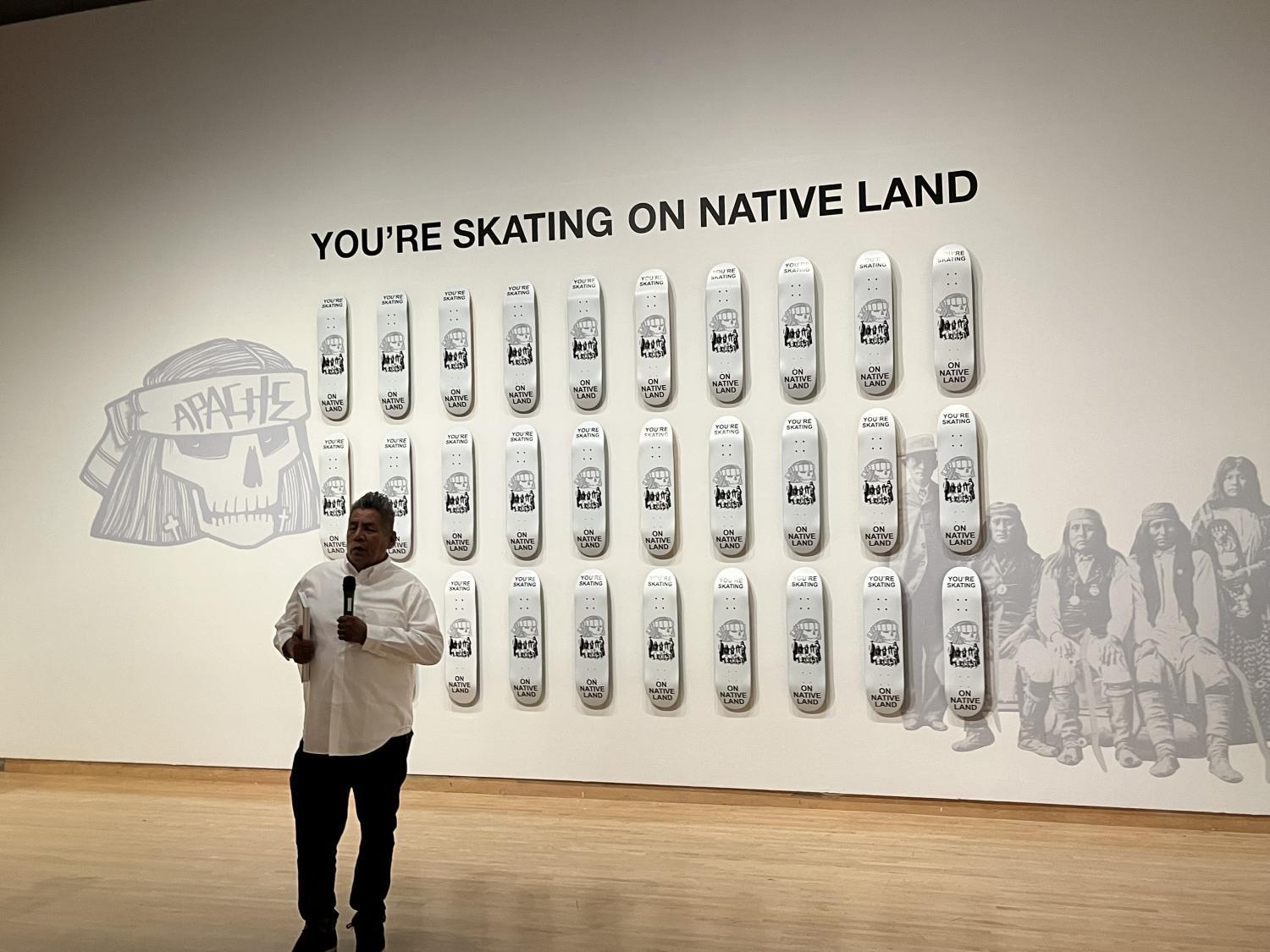 Tom Maxedon/KJZZ
Douglas Miles founded Apache Skateboards and created the slogan "You're skating on native land" for his brand.

His installation includes a large mural of a Native American skate team patterned after one of his own and 30 boards affixed to the wall, each with his brand’s catchphrase that is also emblazoned above them.

Miles created the slogan, “You’re skating on Native land” after noticing how skateboard companies come into marginalized communities, take pictures and video and then leave.

Of course, given the exhibit’s title, one would expect to see a low rider. But not expected, is one that looks like it could be a float in a parade and made with piñata material.

The large brightly colored piece called “Gypsy Rose” by Justin Favela is suspended from the ceiling at an angle as if in mid-bounce.

“What I like to do a lot in my work is kind of challenge the hierarchies of art and materials. So, I make a lot of mine in this piñata style. A lot of people consider my work craft,” said Favela, who isn’t offended by use of the description versus contemporary fine art. 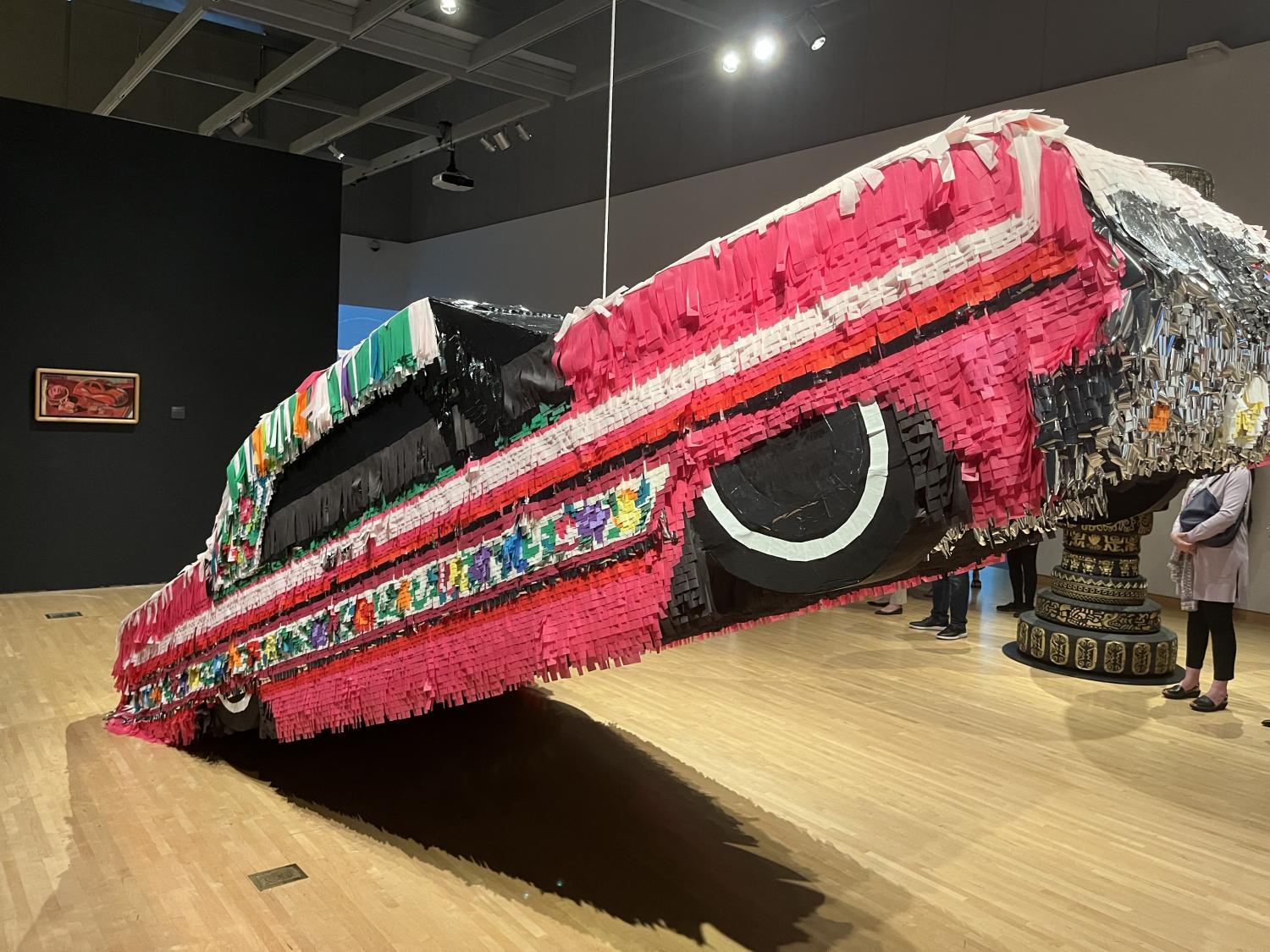 The exhibit was curated by Gilbert Vicario who said the pandemic gave him a lot of time to think about doing something besides just a car show.

“And so, ‘Desert Rider’ evolved into an exploration, really of culture and identity in the Southwest. I think a lot about the geography in which we live. As a curator, I’m really beginning to think a lot more about what that means, how that can be articulated in multiple ways and how we cohabitate, how we learn to live together,” he mentioned.

Whether one enjoys large installations, prints, sculptures, painting or just car culture in general, Desert Rider offers something for everyone and runs at Phoenix Art Museum until Sept. 18. 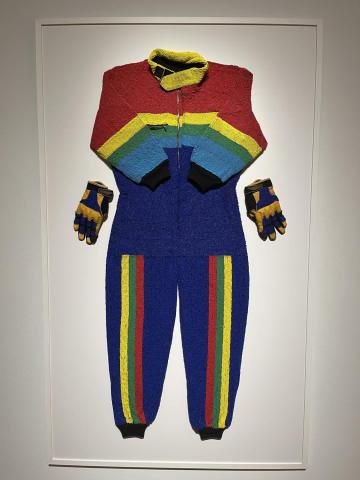