San Rafael Fire: The latest on the wildfire in southern Arizona 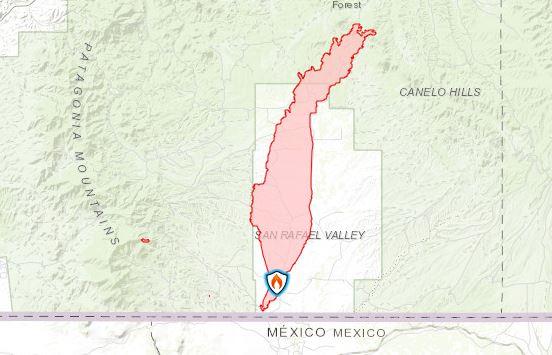 InciWeb
A map of the San Rafael Fire in southern Arizona.

Firefighters are making headway on the San Rafael Fire burning near Patagonia in southern Arizona. The blaze is now 12% contained.

The fire has grown to more than 11,600 acres, but authorities say Tuesday brought relief from the critical conditions that helped it spread over the weekend.

Evacuation orders active Monday for some 80 residents south of Highway 83 have all been removed. As of Tuesday morning, only one area remains under orders to be ready to evacuate if necessary.

The fire began Saturday night. Strong winds and low humidity helped drive it through tall grasslands outside Patagonia. Authorities say its official cause is still under investigation.

May 9: San Rafael Fire spreads in grasslands near Patagonia

The fire has burned more than 10,500 acres of southern Arizona grassland.

Corey Guerin with the Department of Forestry and Fire Management is part of the incident team responding to it.

"So far, crews and aviation resources have been doing pretty good work throughout the day, but we still have a good chunk of the day left to see what these winds are going to do," she said.

He says about 80 people living south of Highway 83 have been evacuated and a portion of the Arizona Trail is closed.

A fire is raging at the southern border southeast of Patagonia. The San Rafael Fire has burned more than 10,000 acres since it began Saturday.

Several communities have been issued evacuations including residences along Canelo Pass Road and Canelo Road.

Covering a portion of the San Rafael Valley, the wind-driven fire is pushing up northeast.

The Coronado National Forest tweeted out over the weekend that the American Red Cross has established an evacuation center at the United Methodist Patagonia Community Church, in Patagonia, for those affected by the fire.