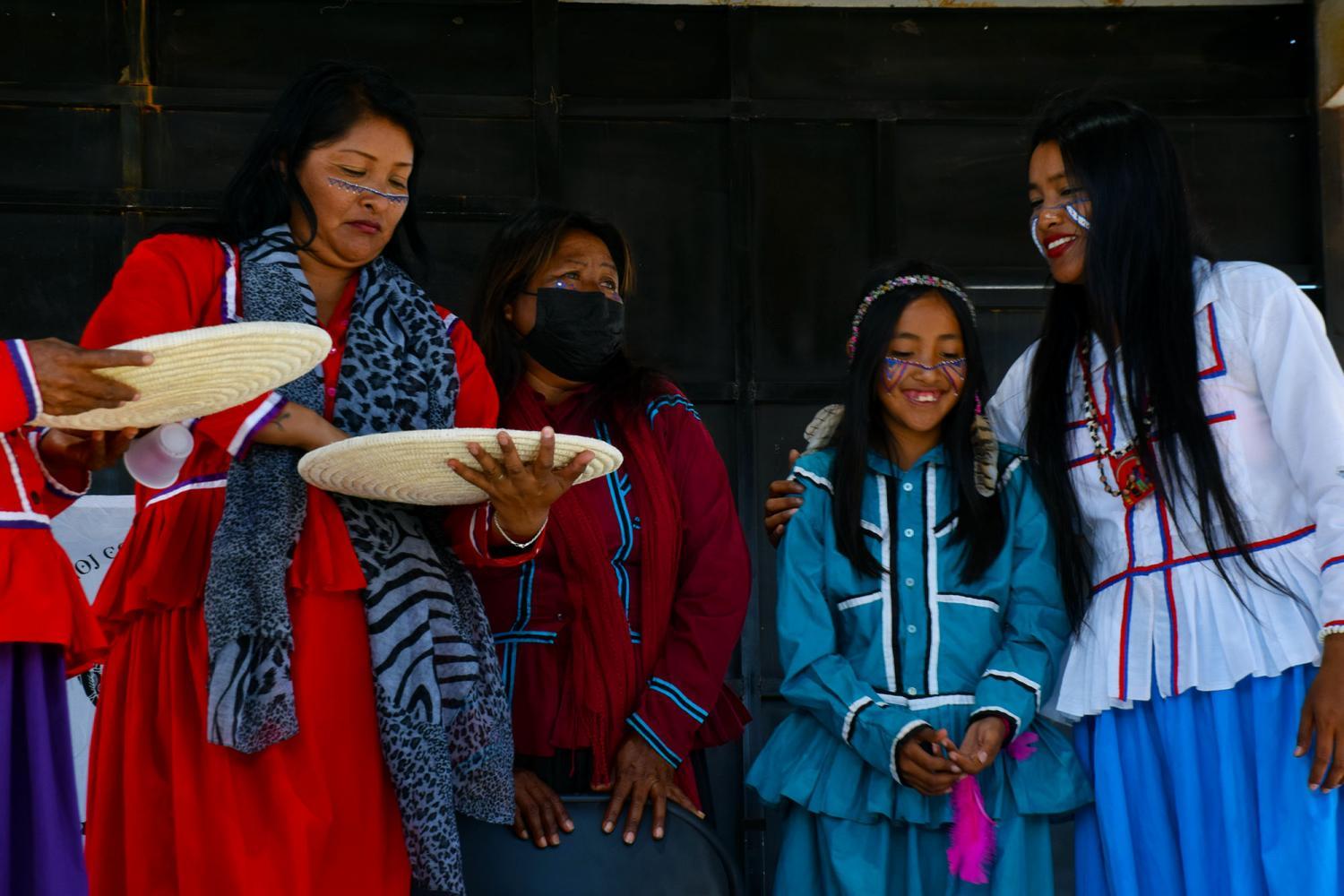 Kendal Blust/KJZZ
Women and girls who harvested eelgrass in April 2022 stand on stage during the Xepe an Coicoos festival.

In the small Comcaac village of Punta Chueca, on the Sonoran coast of the Gulf of California, a group of women gathered around a white sheet piled high with dried zostera marina, or eelgrass.

One woman sang an ancestral song dedicated to the plant, known as hataam, as others beat the dried eelgrass and rubbed it between their palms to remove its small, green seeds. Xnois, as the seeds are known in the Comcaac language, cmiique iitom, are an ancestral food.

“The Comcaac are the only people, the only Indigenous group, that consumes the seed,” said Erika Barnett, a Punta Chueca resident who has been heavily involved in restoration efforts. 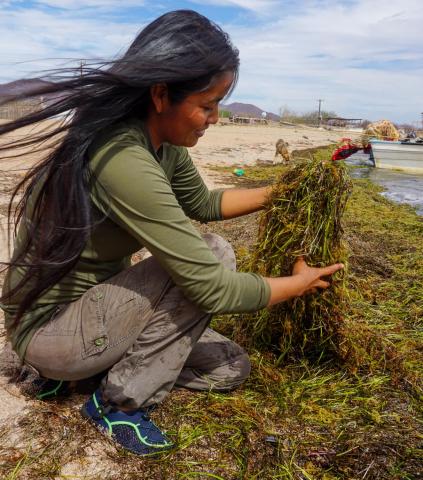 Eelgrass seed has been a part of their culture for millennia, she said. Traditionally, the flour was used to make tortillas and a hot drink combined with honey and sea turtle oil. And because it's quite filling, it used to be carried by Comcaac during sea journeys.

But lately, it’s been dormant.

Barnett said her great-grandparents were probably the last members of her family to collect and eat the xnois seeds. Her father, now 76, last tasted it when he was just 7.

"That's was the last time he ate it,” she said. “It’s very ancient, but it’s no longer eaten like it used to be, and most younger people have never tasted it. So this effort is really rescuing our culture.”

Access to foods like beans, rice and wheat flour displaced the labor and time intensive process that their forebears developed out of necessity, she said.

Now, Barnett is part of a team working to bring the tradition back to their community — both because of the plant's nutritional value and its ecological benefits. Eelgrass creates habitat for sea turtles and fish, protects the coastline and captures carbon.

“It’s important for us to revive these traditions so they can be passed on to future generations,” she said. “But I think we need to show the community that it can be done, first. That it’s hard but we can harvest the seeds.”

So for weeks in April, a group of women and girls harvested eelgrass the way their ancestors would have. They waded into the sea to collect plants floating near the shore, then dried, thrashed and winnowed them.

They harvested nearly 12 pounds of seeds, some of which they toasted and ground by hand into flour to use in recipes both traditional and new. 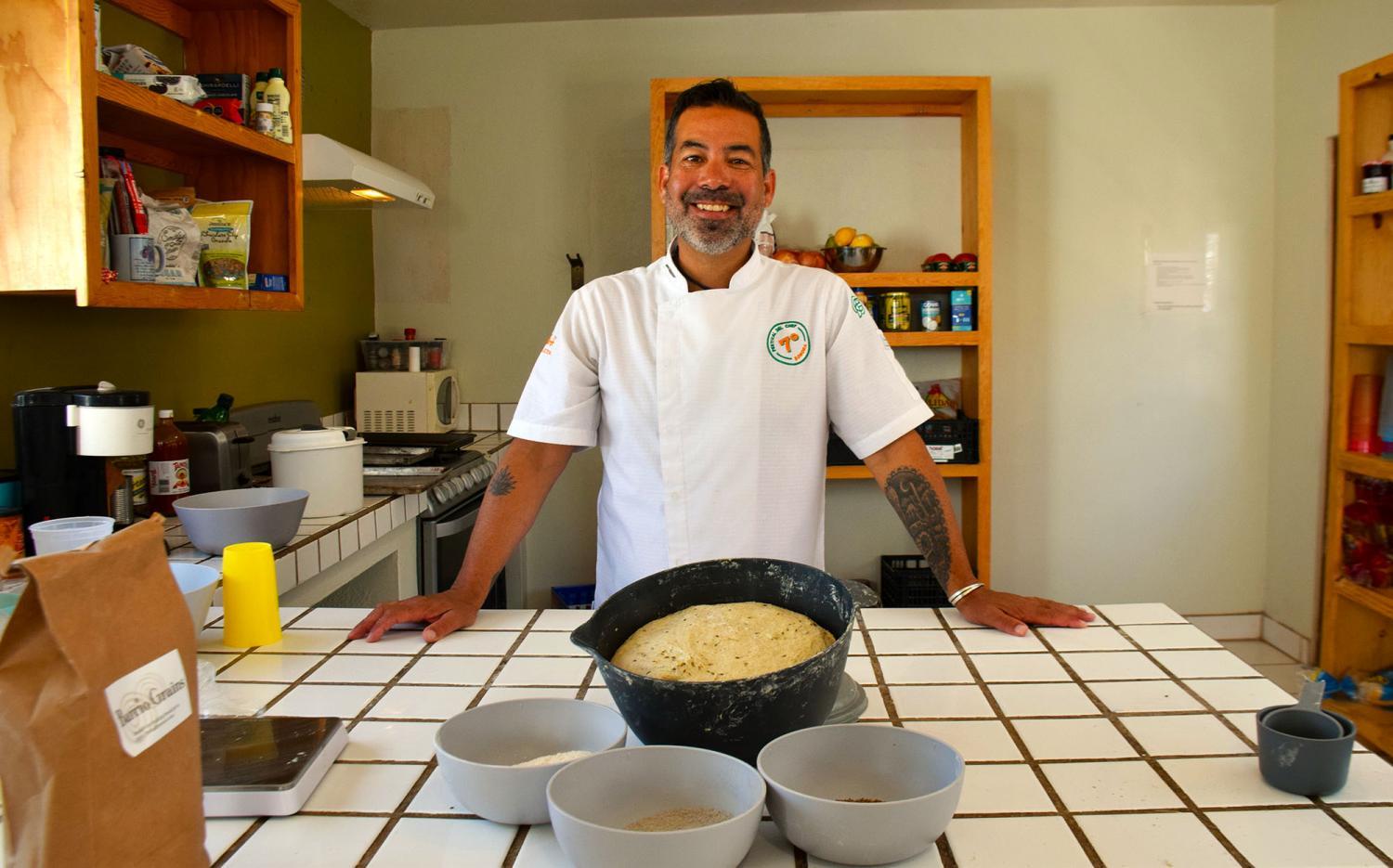 About a dozen Comcaac men, women and children circled around a big wooden table to watch as Guerra mixed the water with yeast, wheat flour and xnois flour and seeds to form a dough, then dipped flattened strips in sesame and more eelgrass seeds and baked them into a hearty, flavorful flatbread.

The cooking demonstration was part of a workshop focused on developing recipes to re-incorporate xnois into the Comcaac community.

After Guerra wrapped up, Laura Molina patted together small tortillas of eelgrass seed flour mixed with water that she cooked alongside a warm drink, or atole, made from more ground seeds and sweetened with a bit of honey — a recipe she learned from her mother.

“My mother taught me how to use xnois,” she said. “By then it wasn’t really used, but one day I asked her to show me how it’s done.”

At first, Molina said, she was nervous to try to recreate the traditional dishes. But she’s gained confidence and said jokingly that the only thing holding her back now is the painstaking process of grinding the xnois seed by hand.

“(Guerra) gave us an electric mill, so that’s what I’ll be using,” she said. 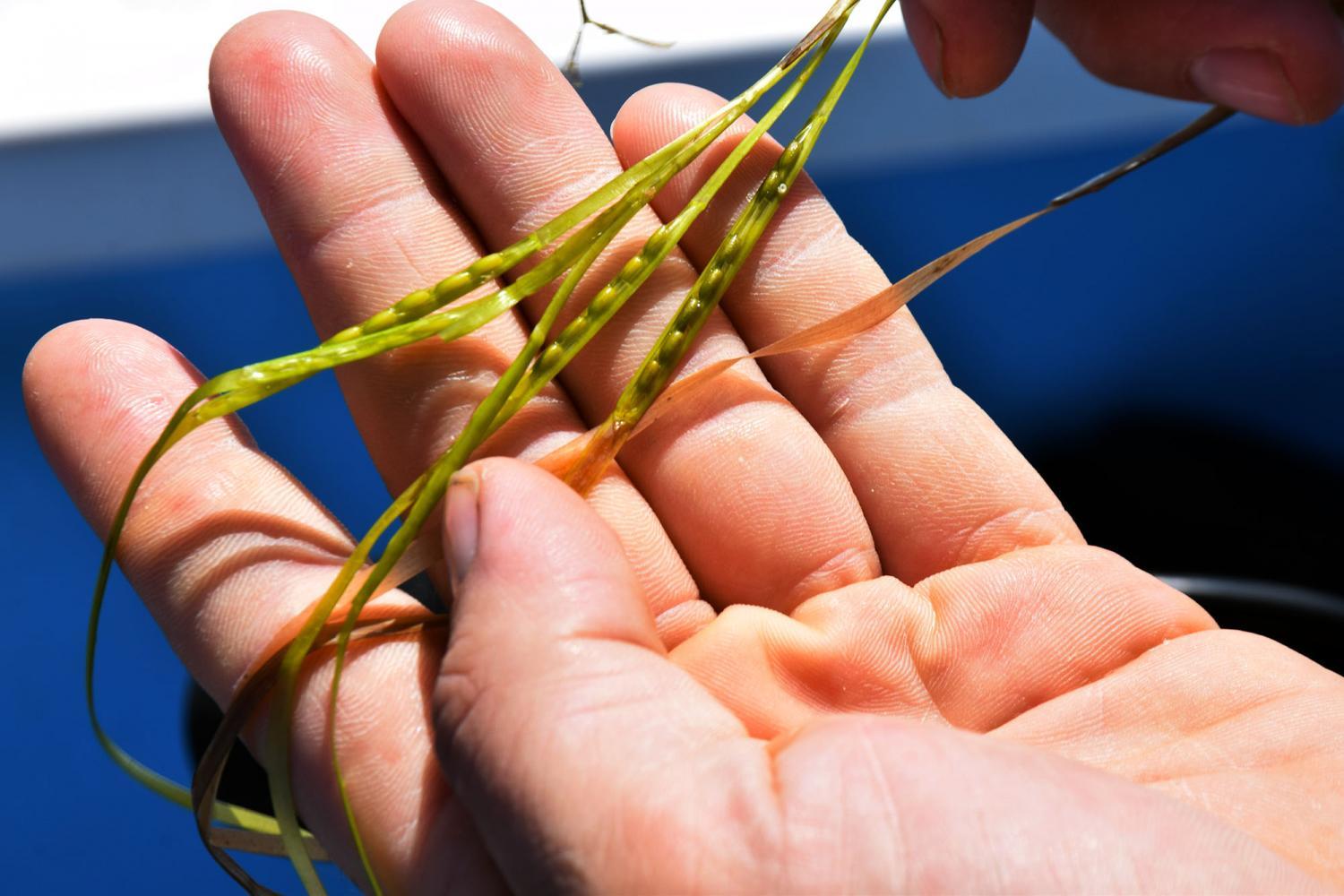 “One of the missions of Aponiente is to look to the sea with hunger,” said Greg Martinez, a chef and biologist at Michelin-starred chef Angel Leon's restaurant Aponiente in Cadiz, Spain.

Leon’s cooking has been internationally recognized for his innovative use of sea. And Martinez said the restaurant is committed to discovering the gastronomic potential in the ocean, both for our health and for the planet.

And eelgrass has a lot of potential.

For one thing, it captures and holds carbon below the water’s surface. Known as blue carbon, it can help mitigate climate change.

“But it doesn’t only sequester carbon,” Martinez said. “It also protects coastlines. It serves as a habitat for thousands of different species that come to breed in their protection. It buffers waves so if you have a tsunami or another storm it protects the coastline in that way as well.”

Despite the swath of ecosystem services seagrasses provide, however, seagrass beds currently are disappearing from the world’s oceans, he said. And that makes it especially important to protect the abundant meadows in the Canal del Infiernillo, a channel between the coast and the massive Tiburon Island that is entirely within Comcaac territory.

About a third of channel's nearly 116 square miles area is covered in eelgrass. But, protected under the RAMSAR wetlands convention, the Infiernillo Channel is also one of the only areas in the Gulf of California where eelgrass is still found, and researchers are currently studying their role in carbon sequestration as well as the potential to transplant or seed eelgrass to other areas. 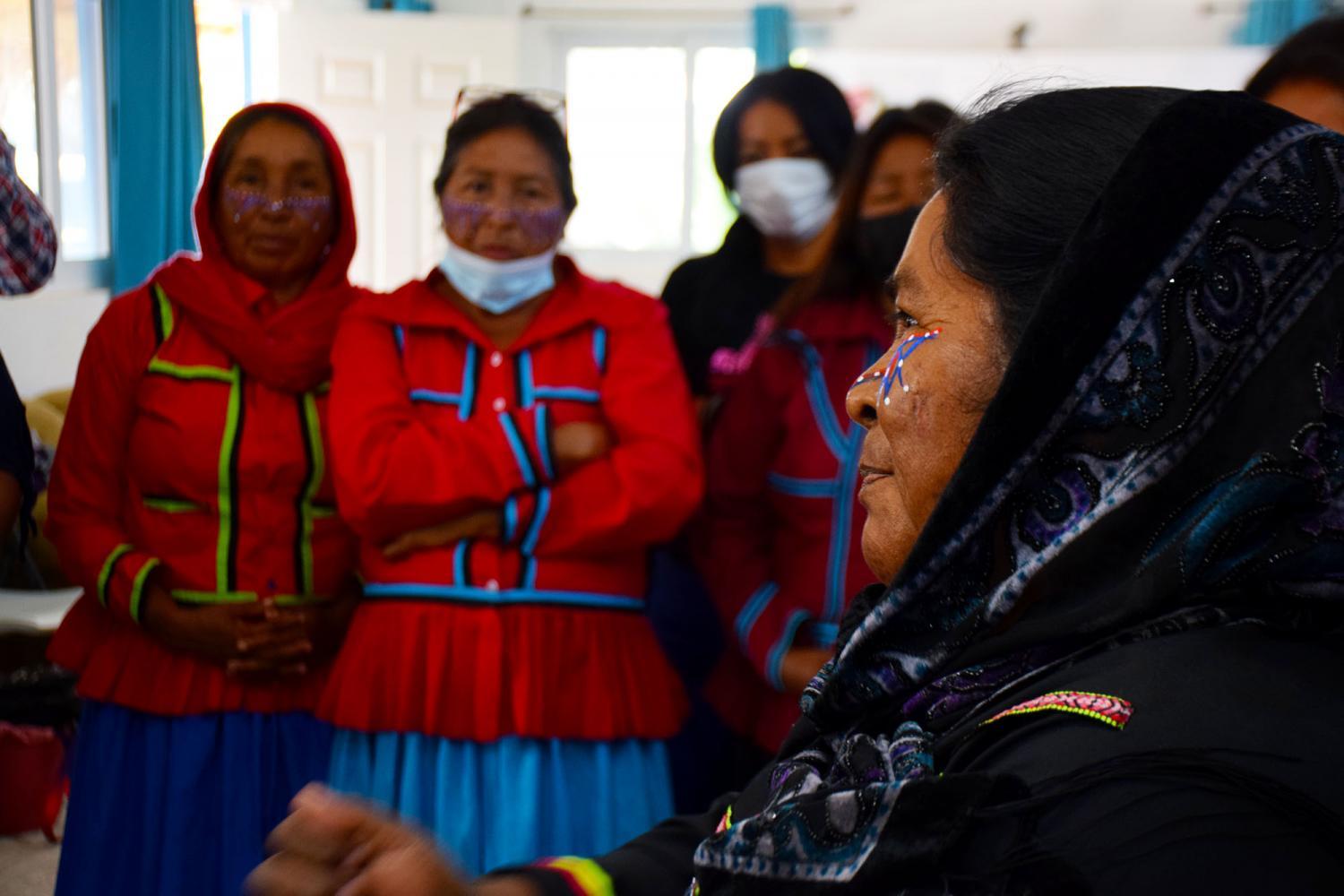 That potential for cultivation is particularly interesting to Juan Martin, a biologist with Aponiente.

He said the restaurant began considering eelgrass seeds as a potential food source in 2018 after Leon read a 1973 article in the journal Science that documented the Comcaac use of the grain. They conducted studies on the seeds and realized they had incredible nutritional value. Eelgrass seeds are naturally gluten-free and packed with protein, fiber and healthy fats.

“We’ve seen that just the presence of this plant on the coast in Spain has created habitats out of nothing, in places where there was nothing,” he said.

The transplanted eelgrass beds are now home to seahorses, scallops and other species. 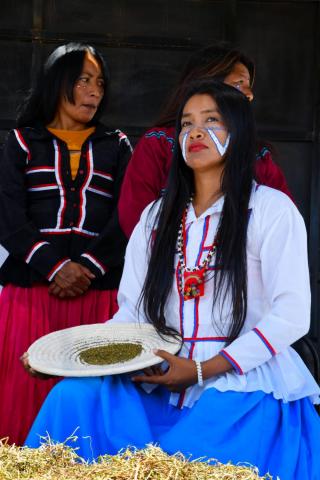 Kendal Blust/KJZZ
Erika Barnett holds a basket of eelgrass seeds at the Xepe an Coicoos festival on May 5, 2022.

The project is in its early, experimental stages, and much more eelgrass will be necessary before it could be harvested and used in cooking. Still, Martin is optimistic, and he credits the Comcaac for inspiring what could be a sustainable, climate-friendly future food source.

“We haven’t discovered anything,” he said. “They have been our inspiration.”

Back in Punta Chueca, xnois was honored as part of an annual festival in the small coastal town on May 5.

The women and girls who’d spent weeks collecting and processing the eelgrass took to the stage, carrying baskets full of seeds, as a community member recounted the plant's origin story.

“Eelgrass is the primary seagrass for our people, because the Spirit gave us permission to collect it and to care for it so that it would grow here in this channel,” said Rene Montano.

Hundreds of years ago, he said, a being arrived on their shores in a strange boat, scattered eelgrass seeds throughout the channel and taught them the proper way to harvest and eat them.

That tradition has been passed down for generations. And Molina, who learned to cook xnois from her mother, said that she is are now committed to pass that knowledge on to the others.

“At first, I was really nervous to try to make the things my mother taught me,” she said. “But now I’m very happy, because I’m going to continue to teach our children, and adults, how to prepare this seed.”

That, she said, is how they keep their culture alive. 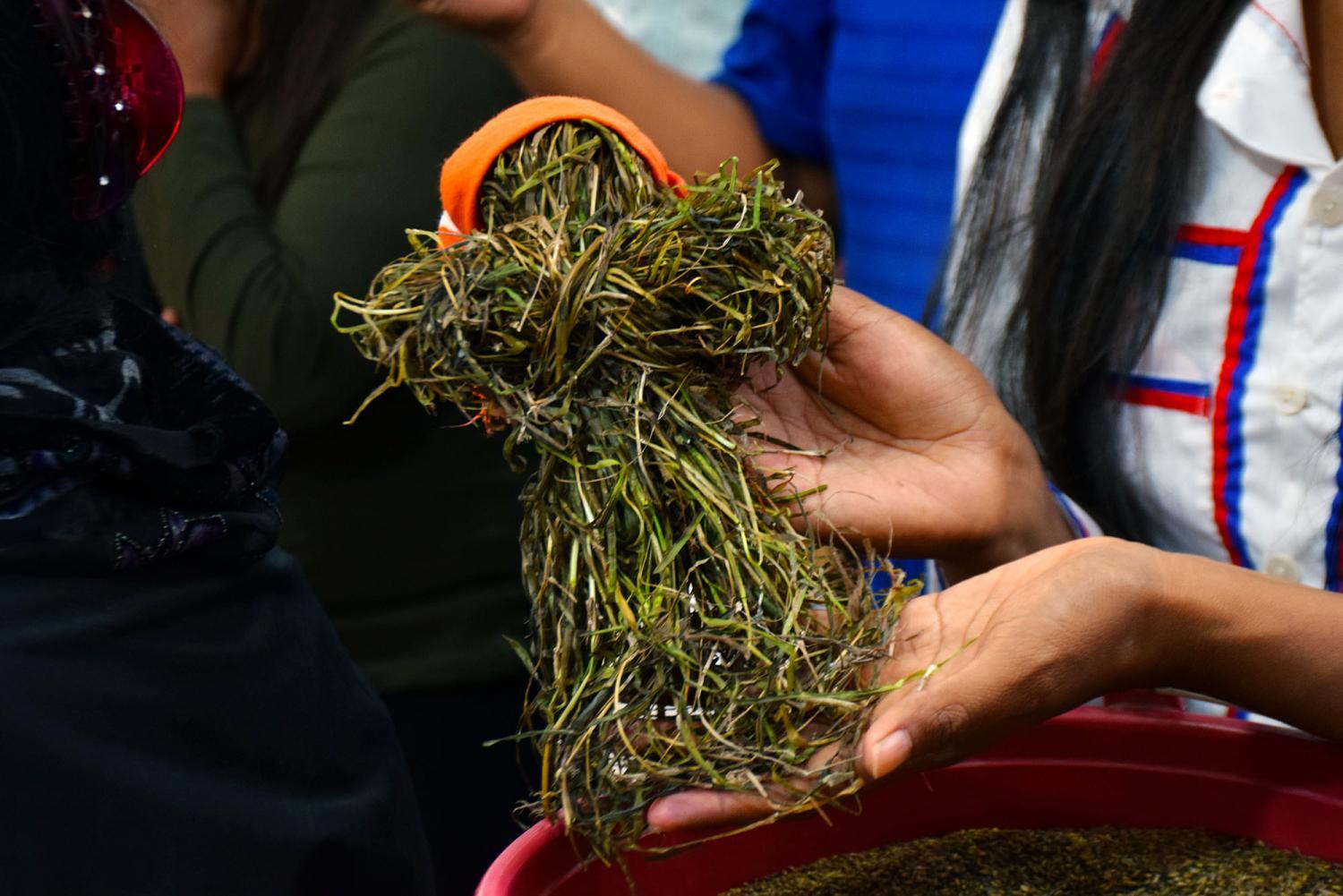 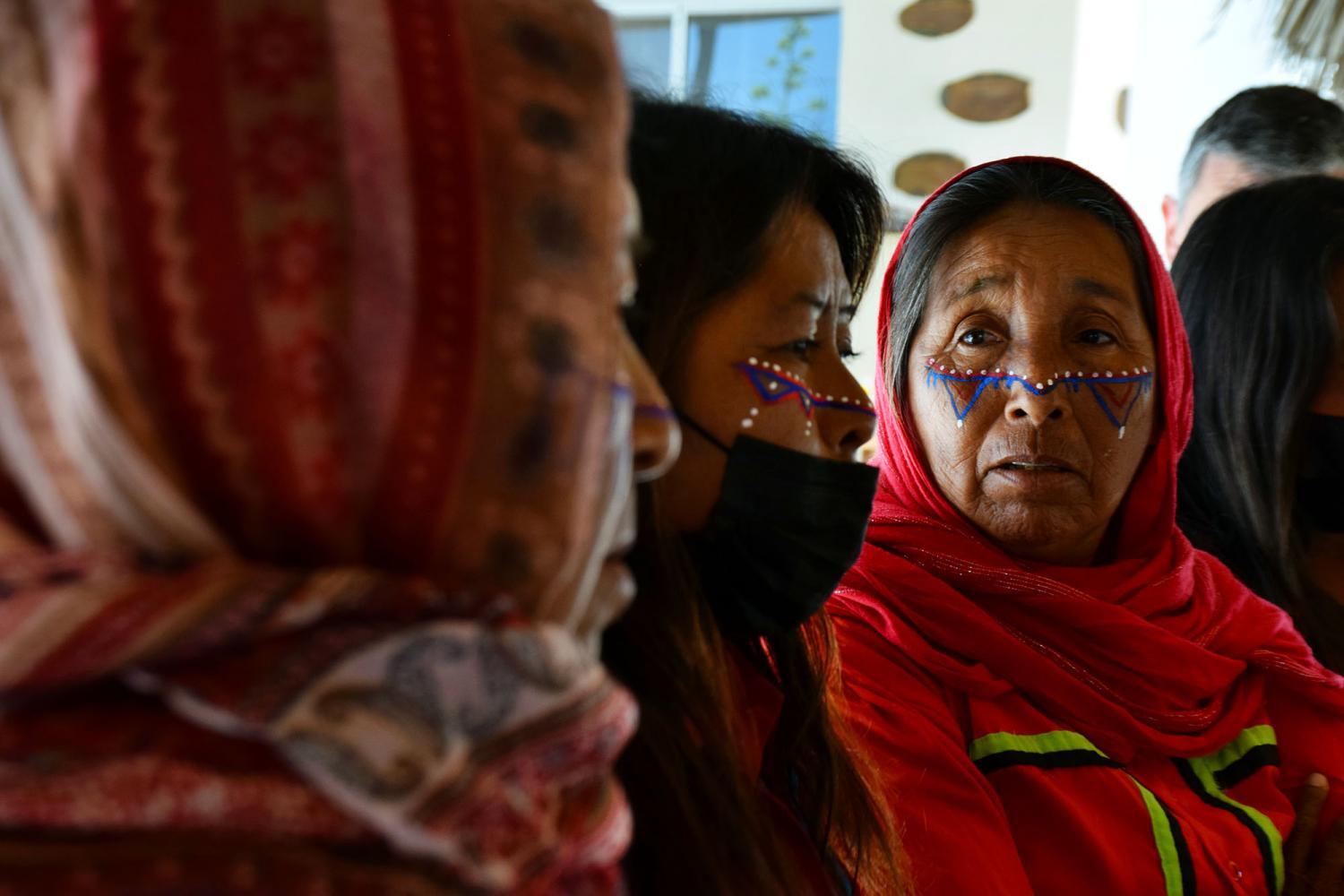 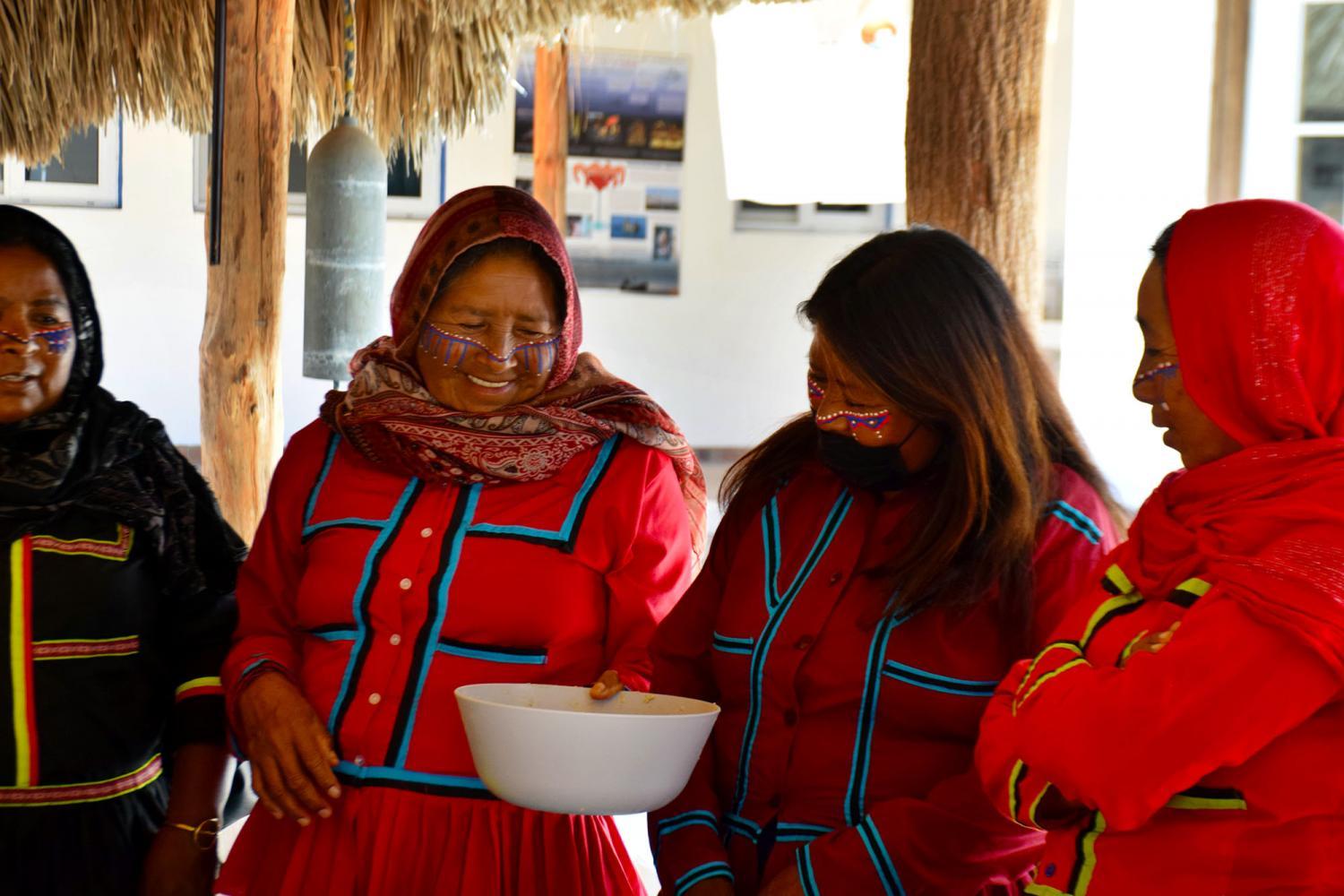 Kendal Blust/KJZZ
Comcaac women pass around a bowl with bread dough that was made using eelgrass seeds and flour. 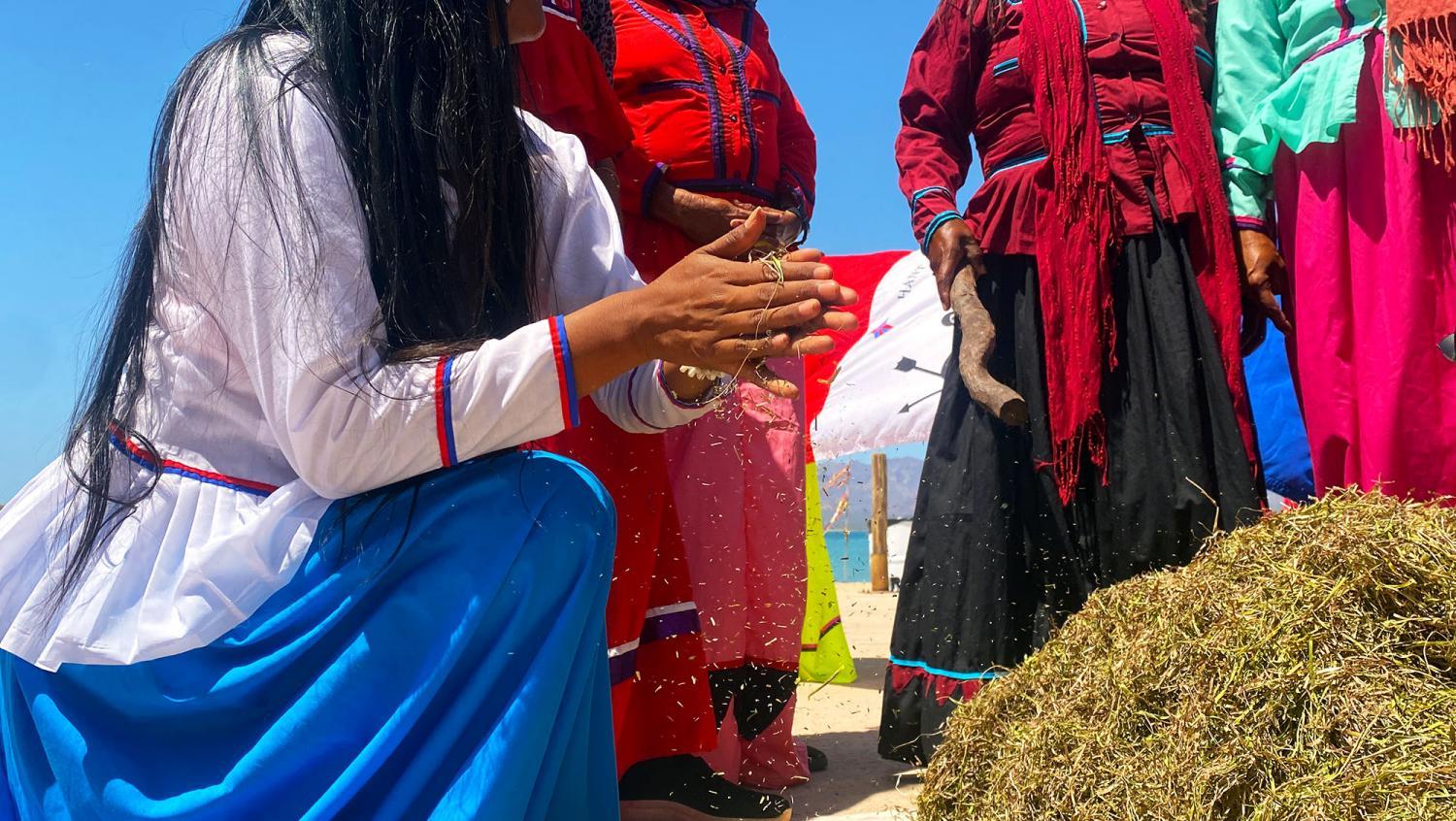