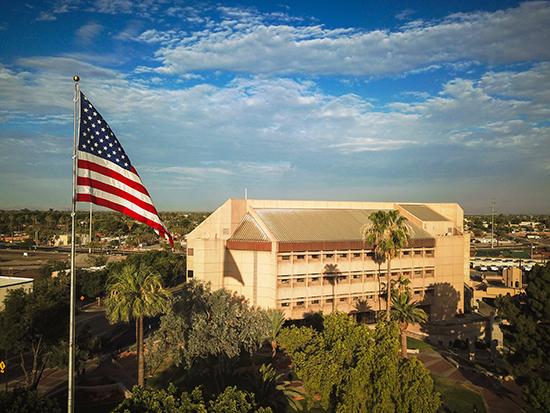 City of Glendale
Glendale has a $70 million plan to overhaul city hall, revamp an amphitheater and improve Murphy Park downtown.

Glendale has become the latest Arizona city to enter into stage one of a water restriction plan, in response to the historic drought in the southwest.

Glendale joins a large portion of the Phoenix metropolitan area, as well as Tucson, in initiating a drought plan. Glendale’s comes in response to critically low water levels in Lake Mead.

“We've been doing a lot over the last, probably, 10 years, to shore up our supplies. We've been storing water underground, in our underground aquifers, we have been improving infrastructure. So we're ready for this drought,” Swieczkowski said.

Swieczkowski doesn’t anticipate Glendale will have any shortage of water for its residents. The plan also shouldn’t impact water-dependent, under construction projects like Crystal Lagoons resort.

“We have our Colorado River supply, but we also have a very robust supply of SRP, Salt River Project water. We also have ample groundwater,” said Swieczkowski.

Glendale’s first step is targeting a 5% water-reduction goal at all municipal properties. Swieczkowski says Glendale residents have recently been asking the city how they can increase their own conservation efforts as Glendale increases conservation-based messaging.