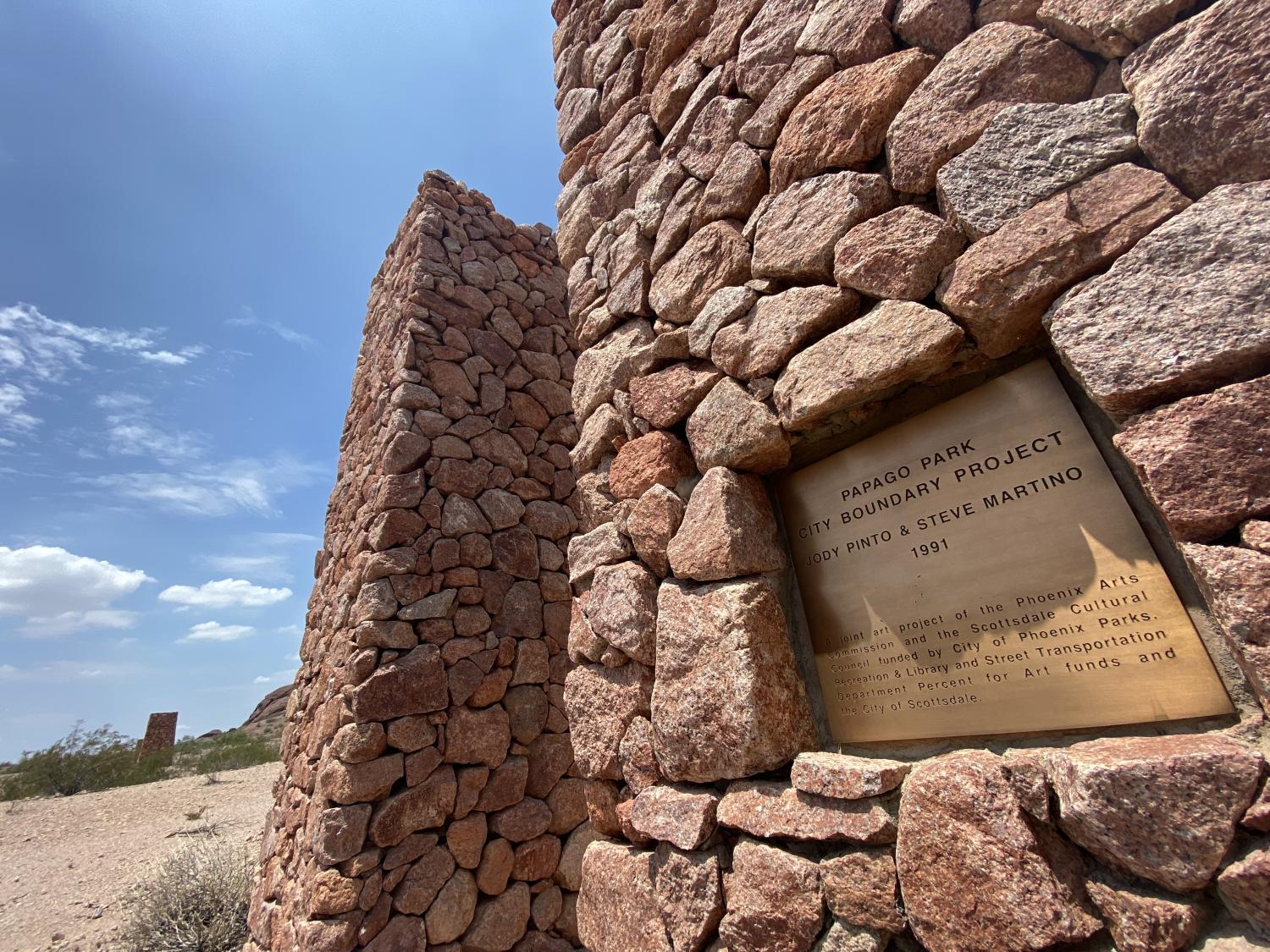 Bridget Dowd/KJZZ
In the early 1990s, the cities of Scottsdale and Phoenix held a public art competition. They wanted to commission a work of art which would mark both the boundary between the two cities and the entrance to the park.

Through KJZZ's Q&AZ reporting project, a listener asked: “What is the significance and origin of Papago Park's mysterious Tree of Life structure?”

“At the far end of the park, I’d often ride by this stone, kind of brick structure.”

He said the structure didn’t appear to have any utility and was oddly shaped.

“So, I went home and promptly did a Google Maps search and looked at it and it looked kind of like a tree, like a lopsided tree,” Mack said. “I thought, 'Well, that’s interesting.'”

Little did he know, a tree is exactly what the structure is supposed to look like. From the ground level, it’s hard to tell. Located on the southwest corner of Galvin Parkway and McDowell Road, it’s a 240-foot-long stone wall with seven smaller, curving stone walls branching off on either side.

“So it really got me thinking, there’s got to be a story here,” Mack said. “There’s something to this. This isn’t some accident.”

Mack is right. The funky desert art piece isn’t just for passersby to look at and wonder about. It serves a purpose, delivering rain water to the surrounding desert plants.

Jody Pinto is a New York-based artist who travels to work on various public art projects. In the late 1980s, she was watching an episode of “This Old House” on TV that featured landscape architect Steve Martino.

“I just thought, ‘I’m going to write down this man’s name and if I ever want to collaborate with a landscape architect who understands desert, this will be the person.’”

As luck would have it, in the early 1990s, the cities of Scottsdale and Phoenix held a public art competition. They wanted to commission a work of art which would mark both the boundary between the two cities and the entrance to the park.

“I called Steve immediately, sent him slides of my work and said, ‘Look, if you’re interested, I would love to enter this competition with you,’” Pinto said. “Steve liked my work and sent back a message saying, ‘Yes, let’s do it.’”

Martino is an Arizona native who’s worked on several projects in that area.

“I liked [the project] because it was a contribution to Papago Park, and I felt guilty because I kind of terrorized Papago Park when I was a kid.”

Martino used to ride motorized scooters through the park. 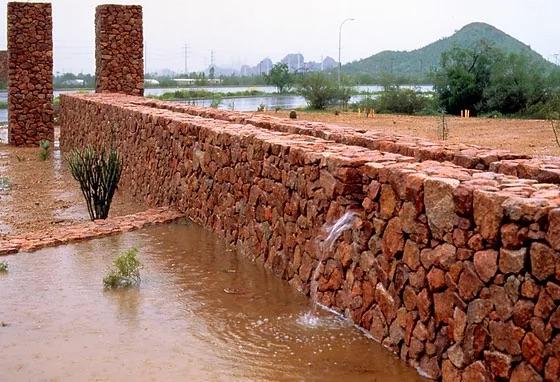 “I thought I’d make up for making some trails in the park where I shouldn’t have,” Martino said.

More than 400 entries were submitted to the contest. Martino and Pinto got the job. They wanted the project to be a celebration of life and regeneration in the desert.

“We felt we needed to deal with a structure that would be about farming, desert farming, water harvesting,” she said. “I thought a tree or a leaf might be the form that our project could take.”

They designed the main stone wall to form a tree trunk that functions as a water-harvesting aqueduct. It collects rainwater, and several cuts along the trunk allow the water to gush out onto farming terraces filled with native desert plants.

The project required countless dump trucks full of stone, but luckily, Martino said they got it for free from a quarry.

“They made gravel for the freeways and their crushers would spit out these hard pieces they couldn’t crush and they said, ‘You can have it if you haul it away,’” Martino said.

Martino got his hands on some free plants too and any plants that were removed from the Papago Park site were preserved and replaced. 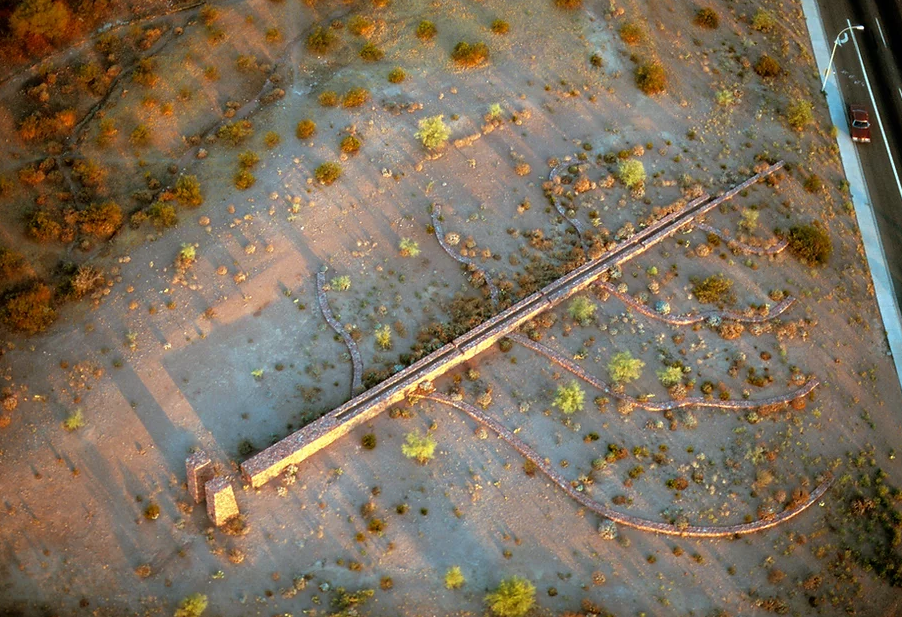 “When [the 'Tree of Life'] was finished, there were some really heavy rainstorms and I went out there to see how it worked,” Martino said. “The water missed our entry point. It kind of went off to the side, so it kind of gave me a chance to get a tractor out there and do a little more grading.”

The next time it rained, the water went where it was supposed to go. Hundreds of people came out to celebrate the finished piece by casting seeds over the land on the longest farming day of the year, the Summer solstice. Within two years, new plants were blooming and thriving.

“The last time I was out there, there [were cacti] that we put in 30 years ago,” Martino said. “We put little chicken wire fences around the bottom to keep the rabbits from eating them and they've doubled in size. There’s trees there that weren’t there, that have come up from seeds. So it was a success.”

To this day, the "Tree of Life" remains one of Pinto’s favorite projects.

“I knew very little about deserts and now, when I travel, I understand things that I never would’ve realized if I hadn’t worked with Steve and the communities,” she said. “So, for me, I’m forever indebted.” 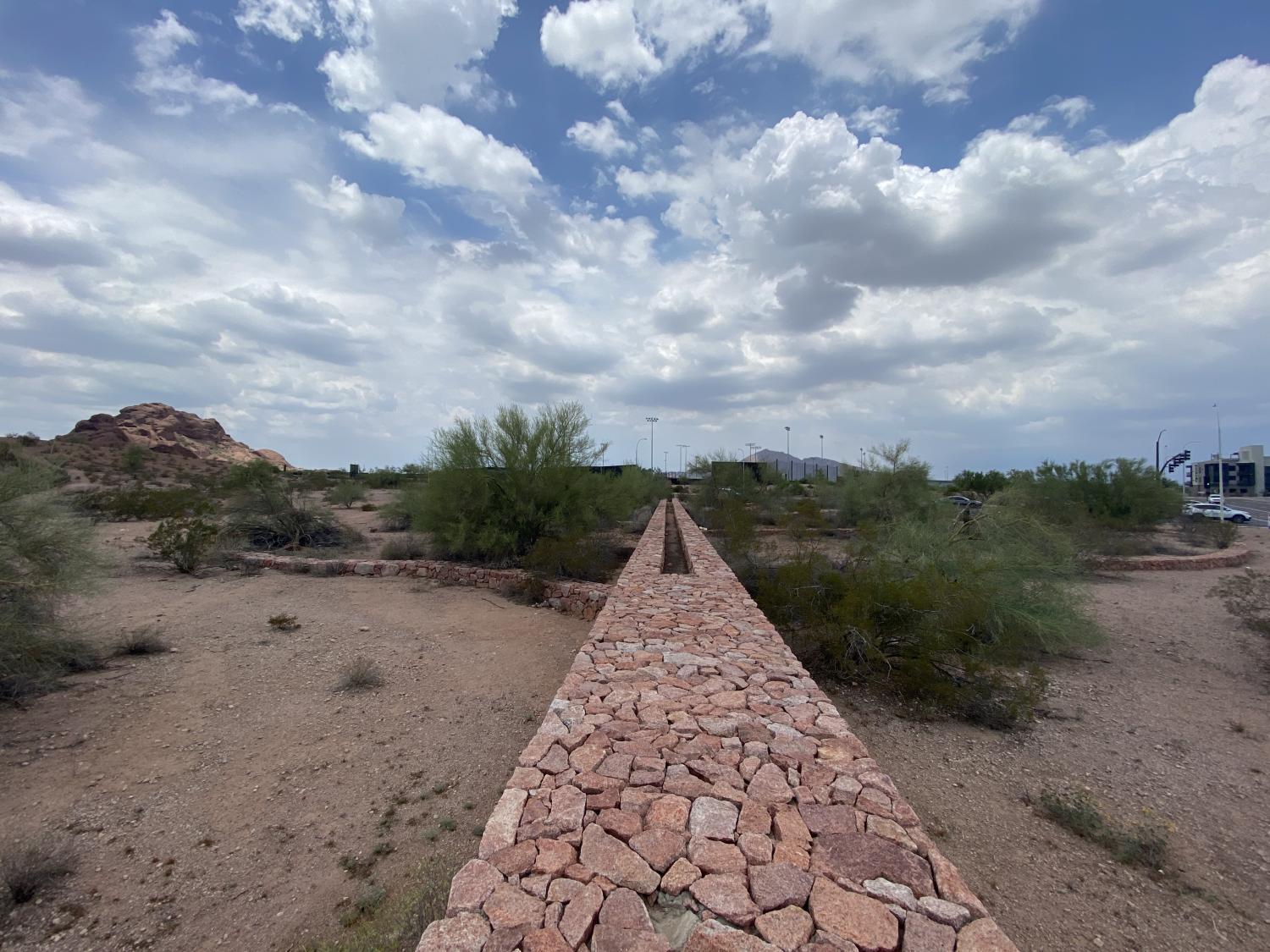 Bridget Dowd/KJZZ
View of the Tree of Life from the base of its trunk in July 2022.