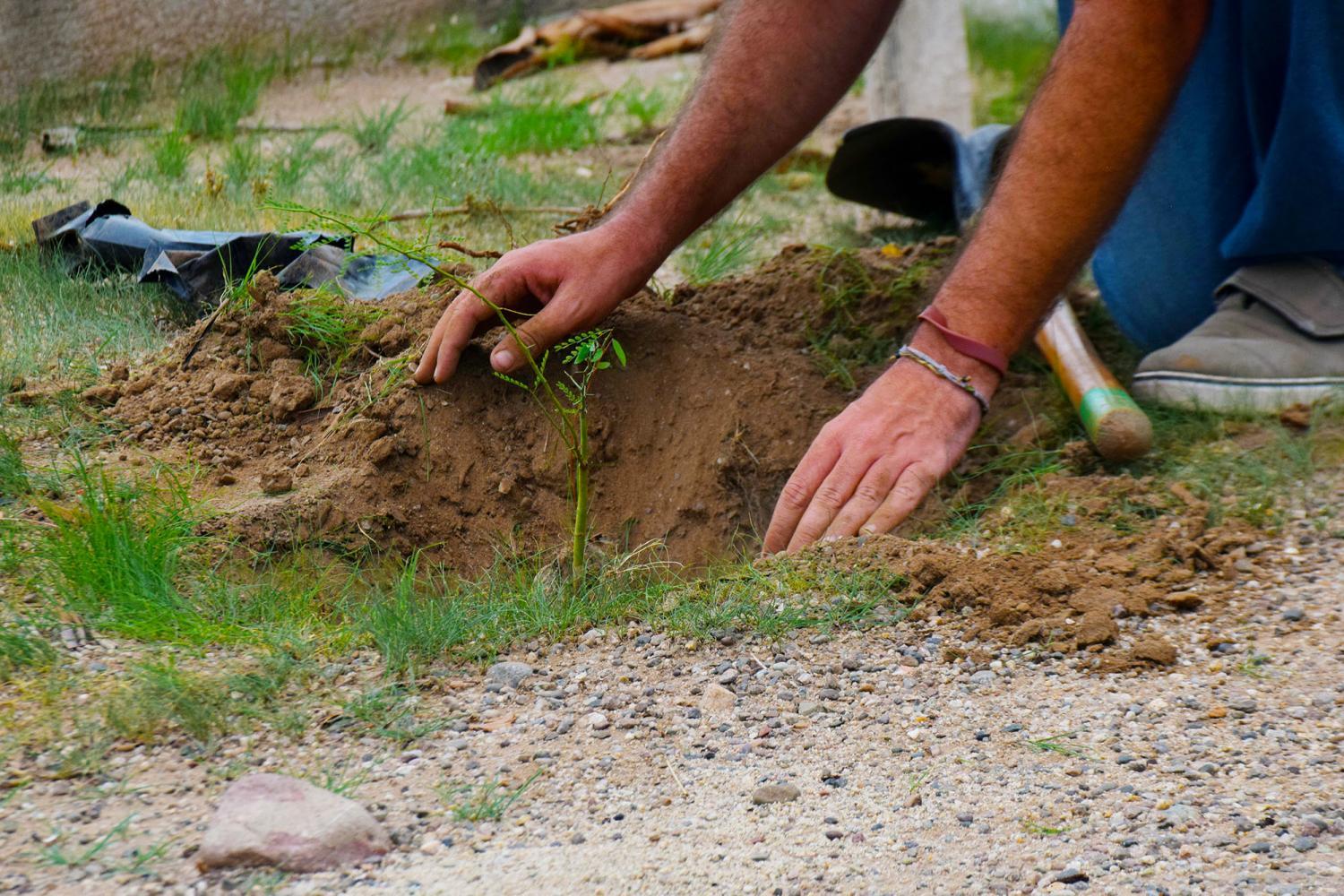 Citlali Sierra uses a shovel to gouge a shallow hole in the hard, dry ground of the Yáñez Cemetery — near the center of the sprawling Sonoran capital Hermosillo.

It’s a sticky July afternoon, gray storm clouds rolling in with the promise of much needed rain.

Sierra, her husband and their two daughters are part of a group of volunteers scattered along the pathway planting small, spindly palo verdes they hope will grow into a lush row of shady trees, laden with vibrant yellow flowers each spring.

“For my girls, when they see, it’s like, ‘Oh, that tree, we planted that,’” Sierra said. “It gives us a lot of satisfaction.”

Sierra said it’s thrilling for her kids to see trees they planted in previous years thriving in the quiet cemetery. They’re working with the nonprofit Caminantes del Desierto to turn it into an urban forest with more than 2000 native plants.

She said the project is a way to bond as a family and get her kids outside in nature — learning about desert flora and fauna and why it's important to conserve them. But reforesting key sites like this one with palo verdes, mesquites and ironwoods can improve their city — making it more livable and resilient in the face of climate change, growing heat and diminishing water supplies.

“We don’t have enough water,” said Sergio Muller, co-founder of Caminantes del Desierto, or desert walkers, which carries out a variety of conservation projects in Sonora.

He said Sonora is facing a water crisis. Communities across the state routinely find their taps running dry during the summer months. Some struggle to access water year-round. And for the past two years, the capital has only been saved from widespread water shortages by last-minute monsoon rains.

Native plants, he said, can help by providing shade and beauty without soaking up excessive amounts of Hermosillo’s scarce water.

“Hermosillo was a green city, truly green 20 years ago,” he said. 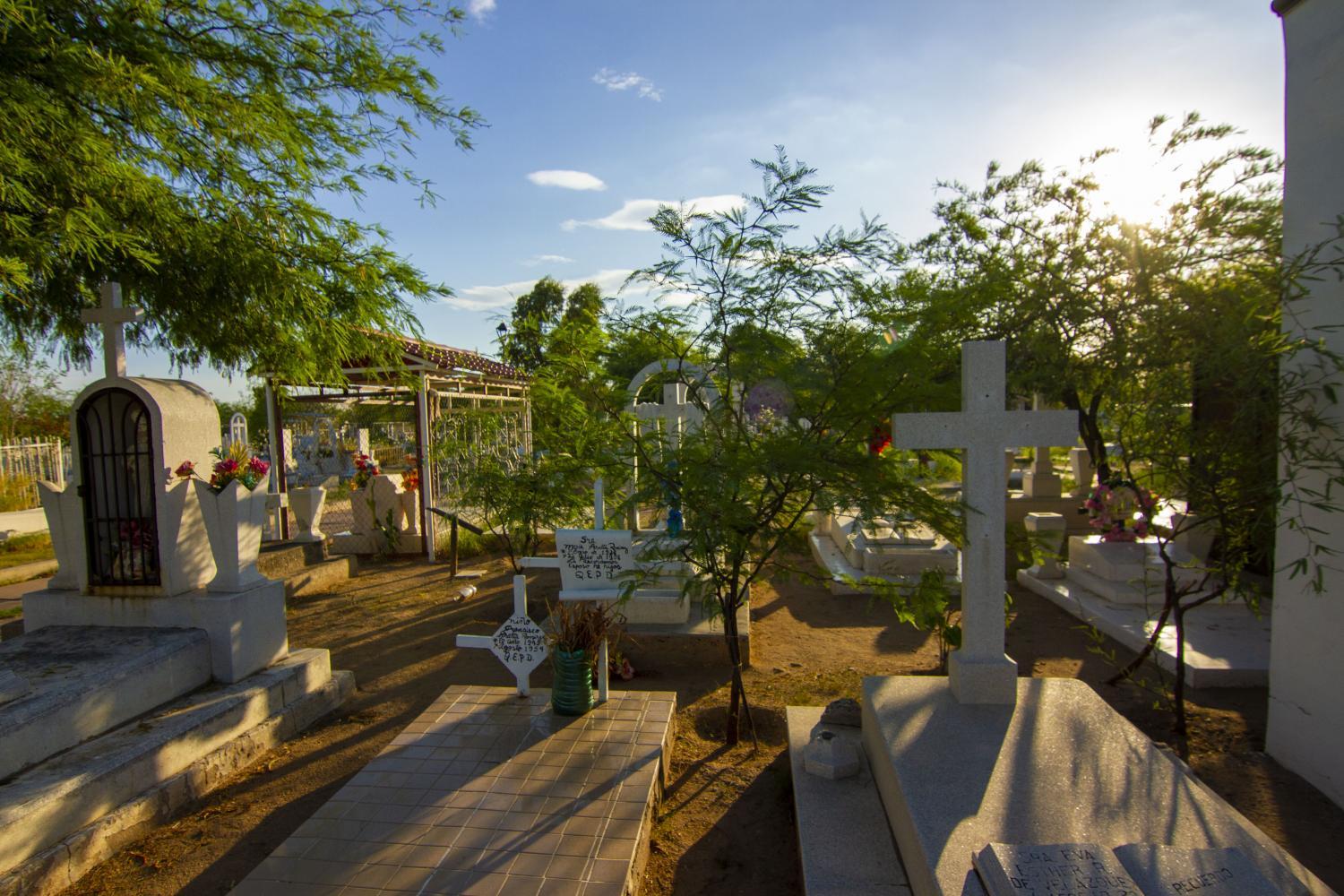 But many of the trees that filled parks and lined the streets have died — unable to withstand the heat, drought and storms that many native plants are made for.

So, his group and others are planting native trees — in the cemetery, in parks and medians — usually working during the monsoons when summer rains can help the plants flourish.

Eventually, he said, each path through the cemetery will be planted with different trees so that the rows will bloom yellow, purple and lilac in the spring.

So far, they’ve planted more than 350 trees, as well as a pollinator garden full of flowering brittlebush, fairy dusters, chuparosas and other endemic species — plants that Muller said are becoming increasingly popular in Hermosillo.

“We see the example of Tucson. Everybody says, ‘Oh, Tucson is so beautiful.’ Those are all native plants, not the tutifruity mix in Hermosillo of who knows what,” he said. “If you take care of native plants they can be beautiful.”

Cities like Tucson, he said, are proof that desert species can be beautiful, and much more sustainable than the mostly tropical trees that many in Hermosillo have gravitated toward in the past.

Now, though, he said the problem now is supplying enough native plants to keep up with demand. Most private nurseries still cater to those looking for non-native options, making it difficult for environmental groups or even individuals to find native seeds and plants. Filling that gap is where the government comes in, he said. 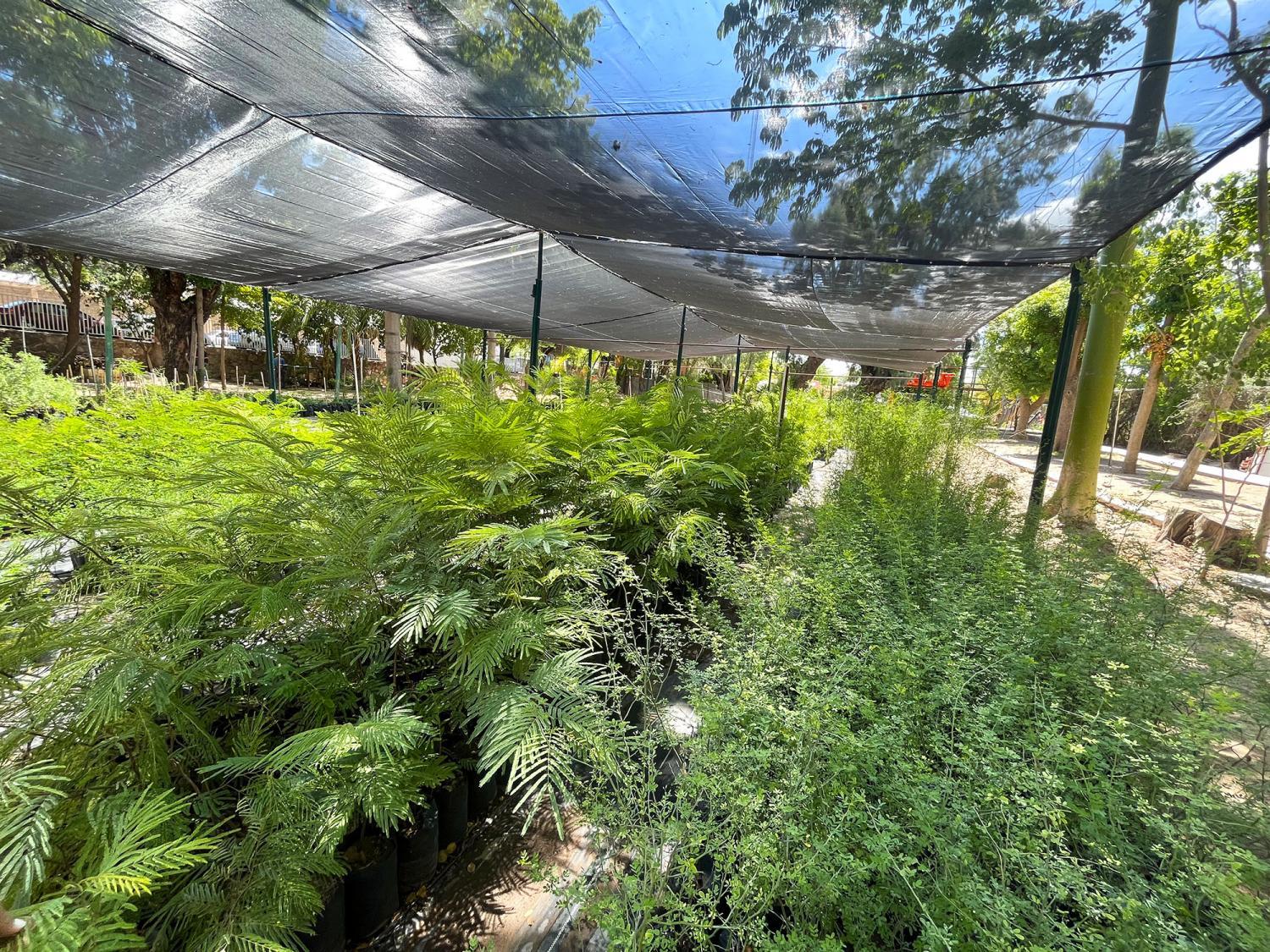 Amparo Fontanot opens the gate to the Hermosillo City Nursery where workers are raking up leaves and watering plants.

“When I took this job, I said, ‘OK, so we’re going to reforest the city. But the city needs the right plants,” said Fontanot, who took over as head the city’s parks and gardens department when the current city government took office last September.

It quickly became clear that growing native plants should be a priority for the all-but-abandoned nursery, she said.

The city nursery, or "vivero municipal," reopened in April as one of just a handful of city-run nurseries in Mexico dedicated entirely to cultivating native plants like mesquites, palo verdes, ironwoods, desert willows and acacias.

“We need more shade trees in the city,” Fontanot said. “That’s phase one.”

She said her top priority are trees that can make the city less brutal for people waiting at bus stops or walking down streets. Later, they’ll add plants that provide more ground cover, which can boost biodiversity and color. Right now, they’re starting to grow yellow, orange and red-flowered Mexican bird of paradise, agaves and ocotillos.

And Fontanot said the response has been enthusiastic.

“When we have events where we give away trees — we call it adoption — hundreds of people lined up, even in the summer heat,” she said. “People want to help us have a better Hermosillo.”

The need for reforestation, she said, is increasingly evident.

“And thank god Hermosillo is full of environmental groups that are really taking the bull by the horns, as we say in Mexico,” she said.

Dozens of citizen-led environmental groups are leading the way on sustainability, she said. And that’s crucial because the city has limited resources. Convincing the mayor and city council to spend funds on plants can be a challenge. So she is working closely with groups like Caminantes del Desierto, and with neighbors who are committed to caring for native plants in their local parks.

She also hopes that there can be some cross-border collaboration between Sonora and Arizona.

"I really want to create that," she said. "Because what happens here impacts Arizona. And vice versa." 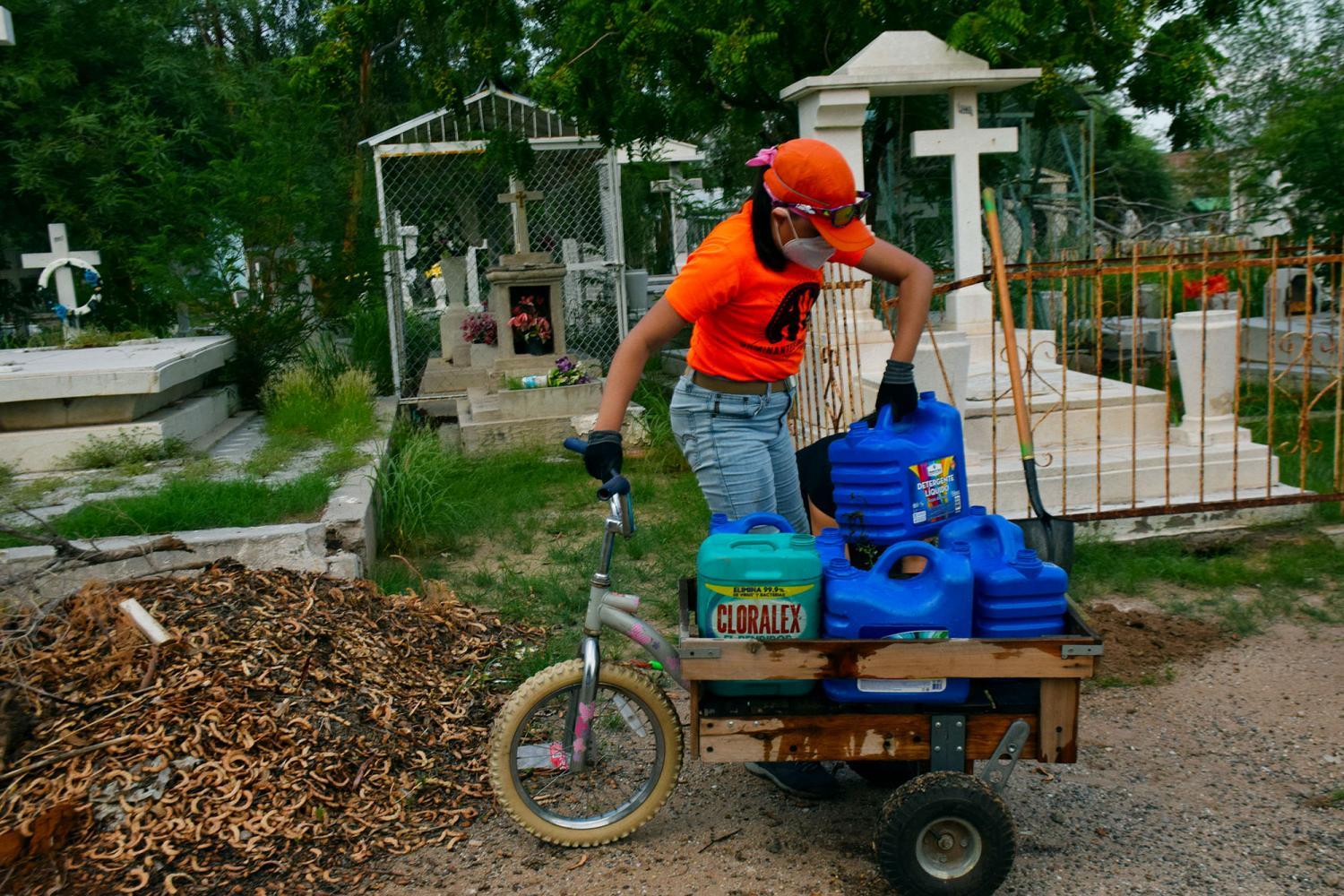 At the cemetery, the volunteers are wrapping up for the day. Sierra’s daughters pull a wagon full of large, blue laundry detergent jugs being reused as watering cans so volunteers can douse the newly planted trees.

Like Fontanot, Muller said his hopes for a greener Hermosillo rest mainly on groups like this one — because waiting for government intervention will take more time than they have with the looming threats of climate change.

“We need people to come out and help us. The government should be doing their part, but if we leave it to the government it will take too long,” Muller said.

Planting native trees and restoring green spaces, he said, is one way Hermosillo residents can take their city back and make it a place they want to live for years to come. 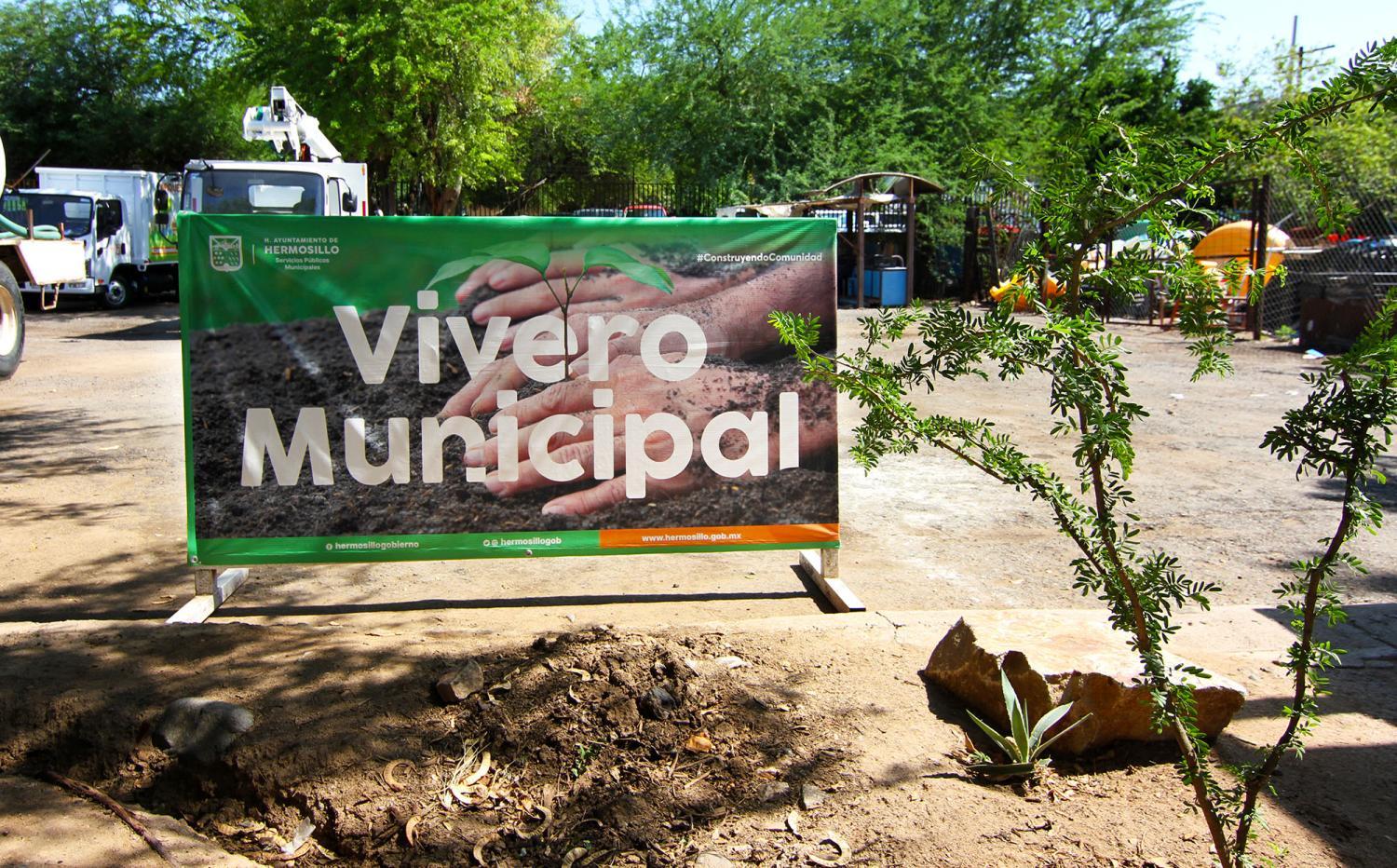 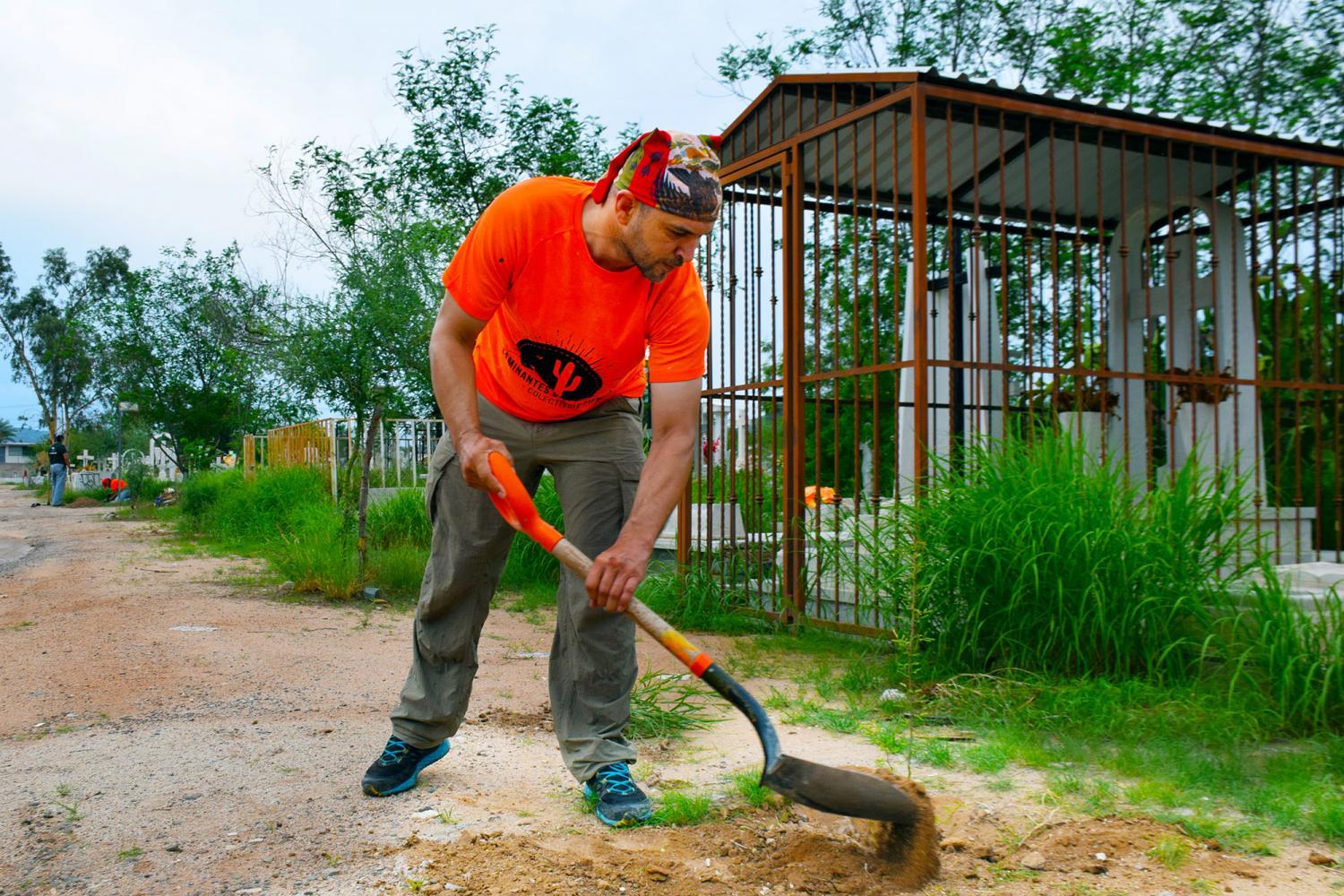 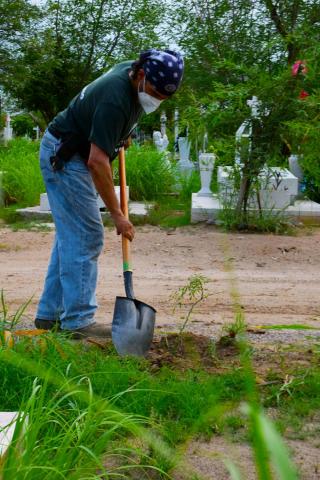 Kendal Blust/KJZZ
Luis Gonzalez digs a hole for a palo verde in the Yáñez Cemetery in Hermosillo, Sonora. 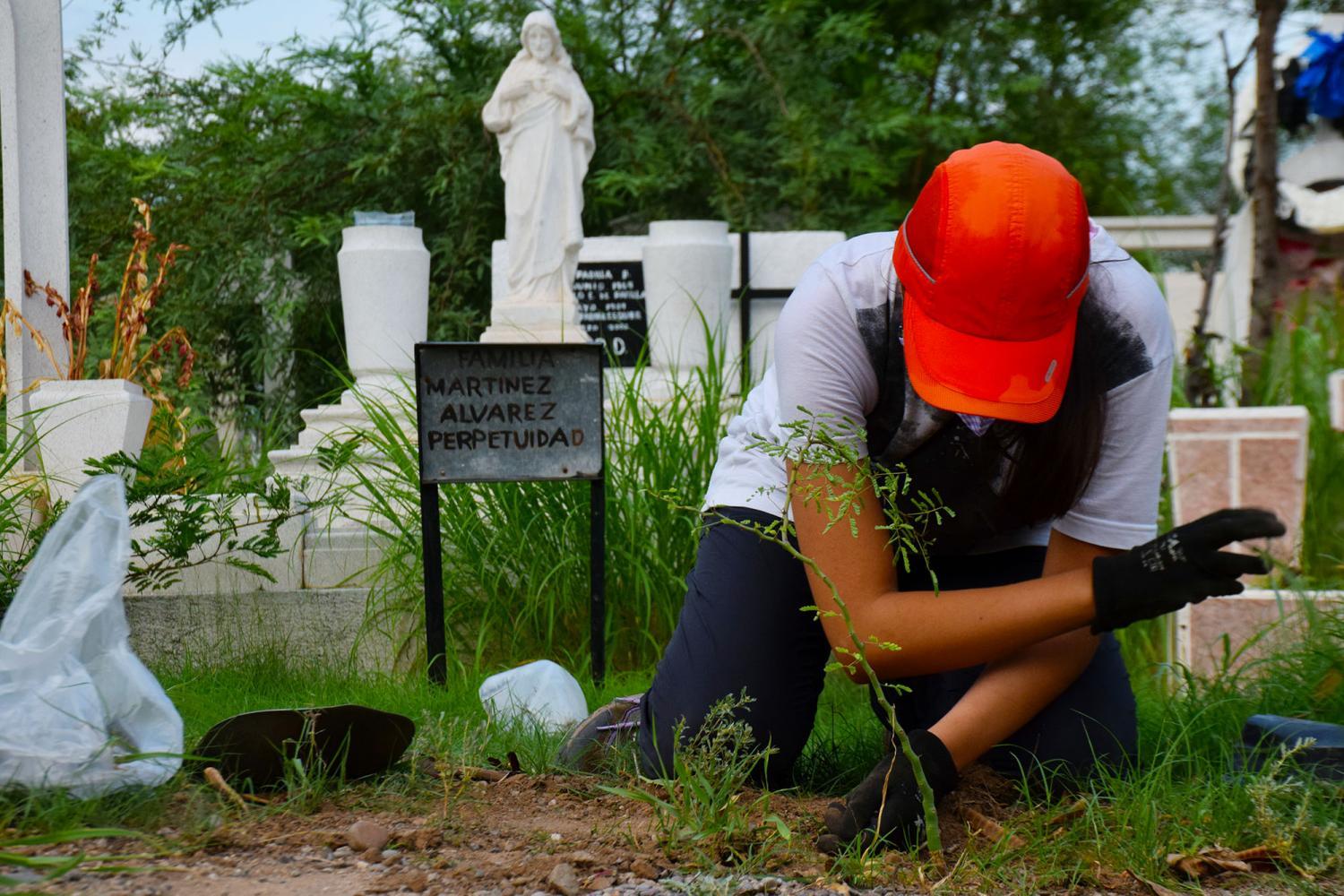 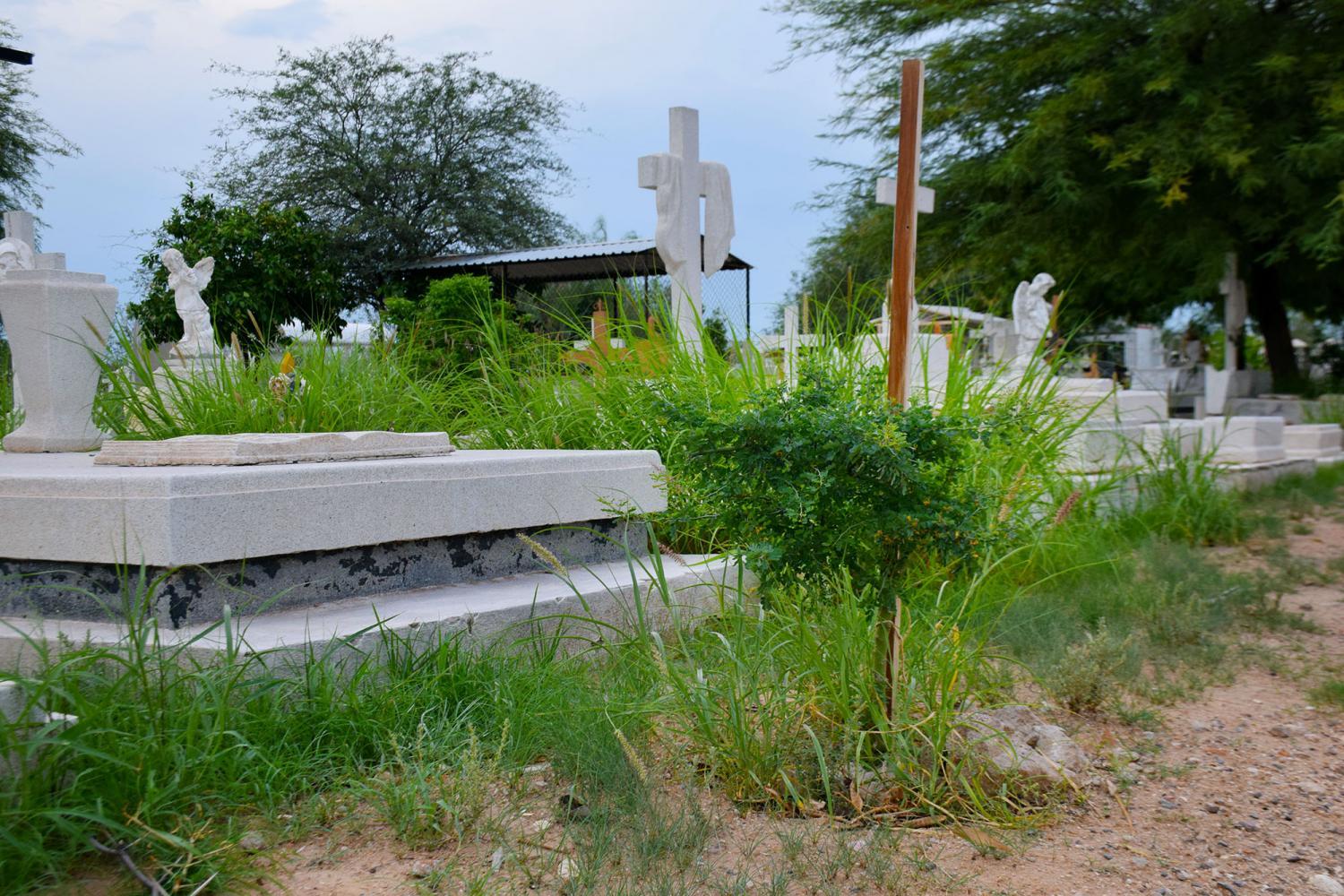 Kendal Blust/KJZZ
Trees planted in past years continue to grow in the Yañez Cemetery. 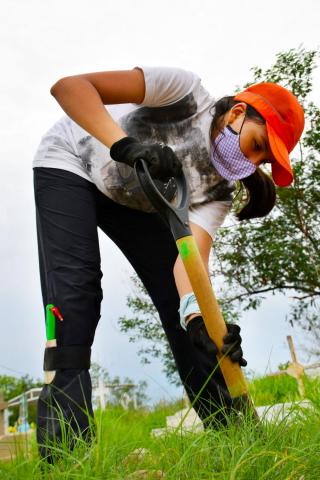 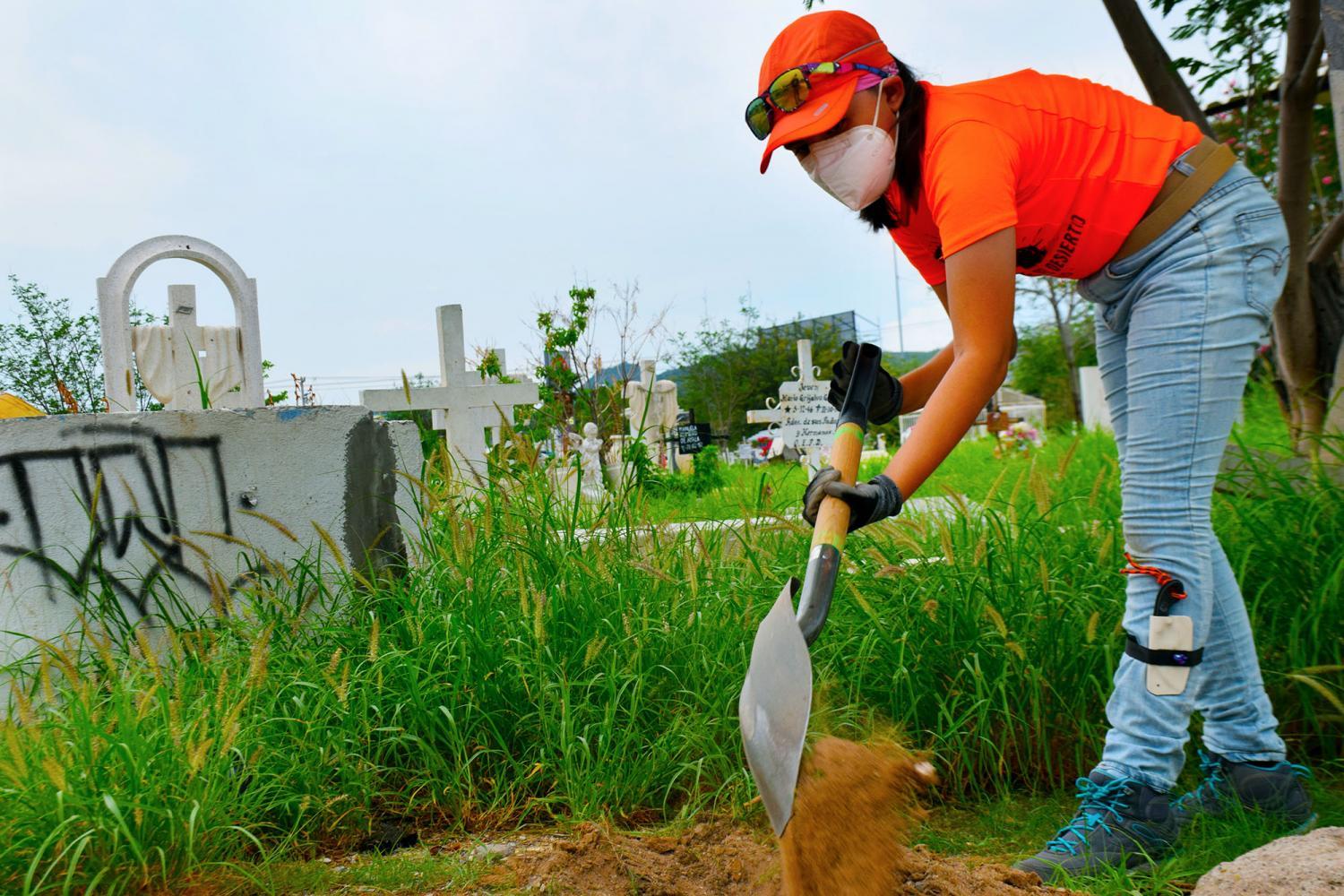 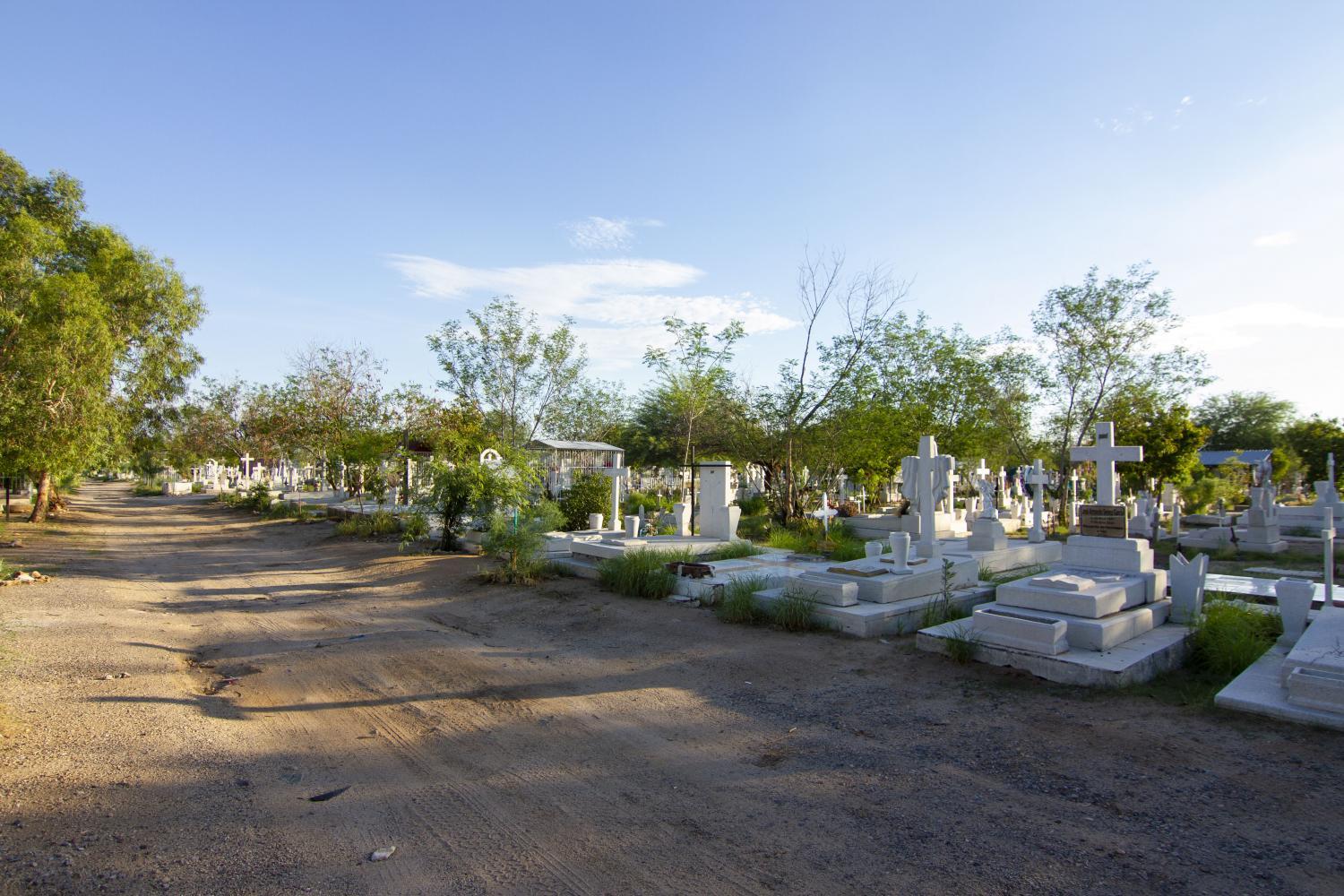 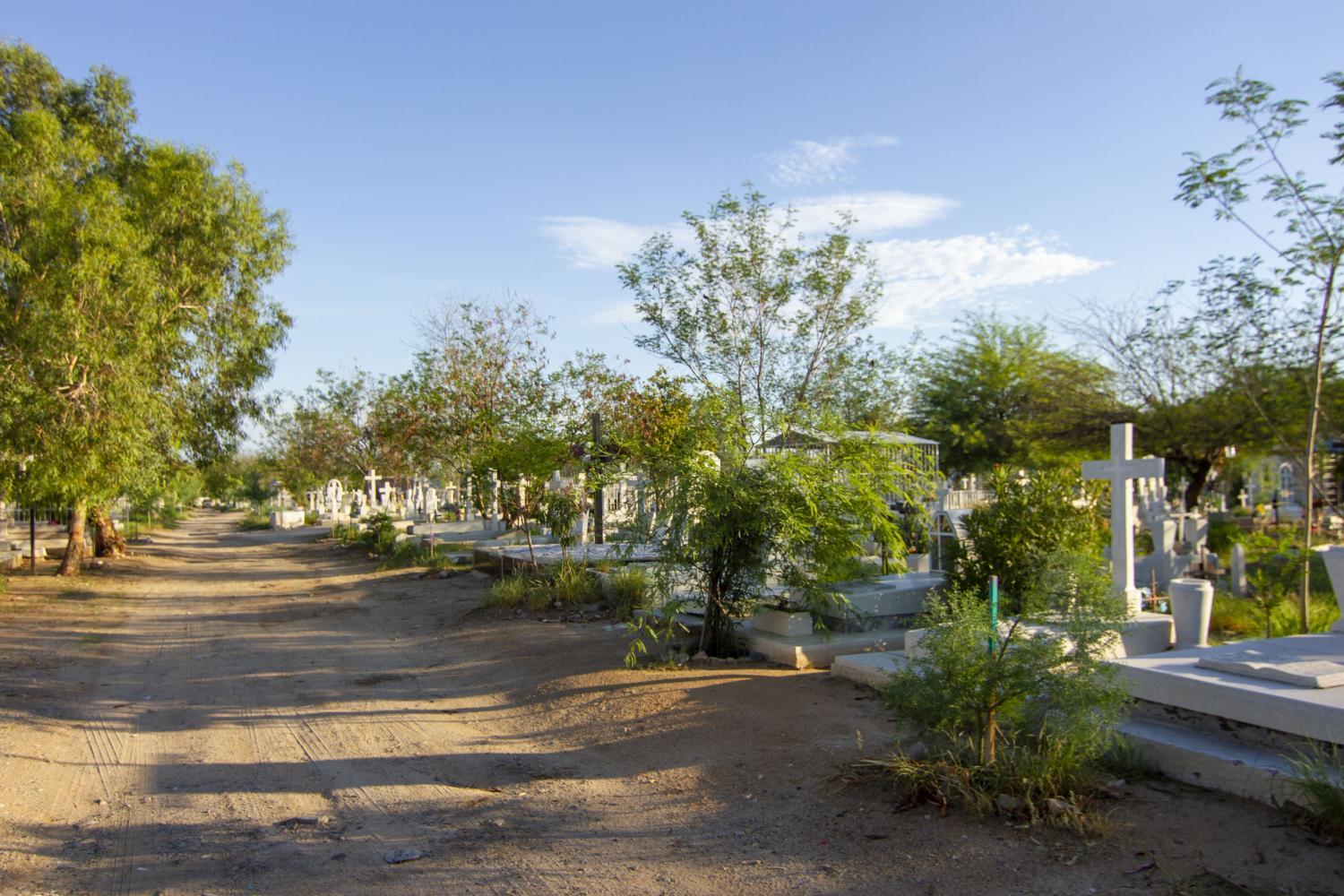 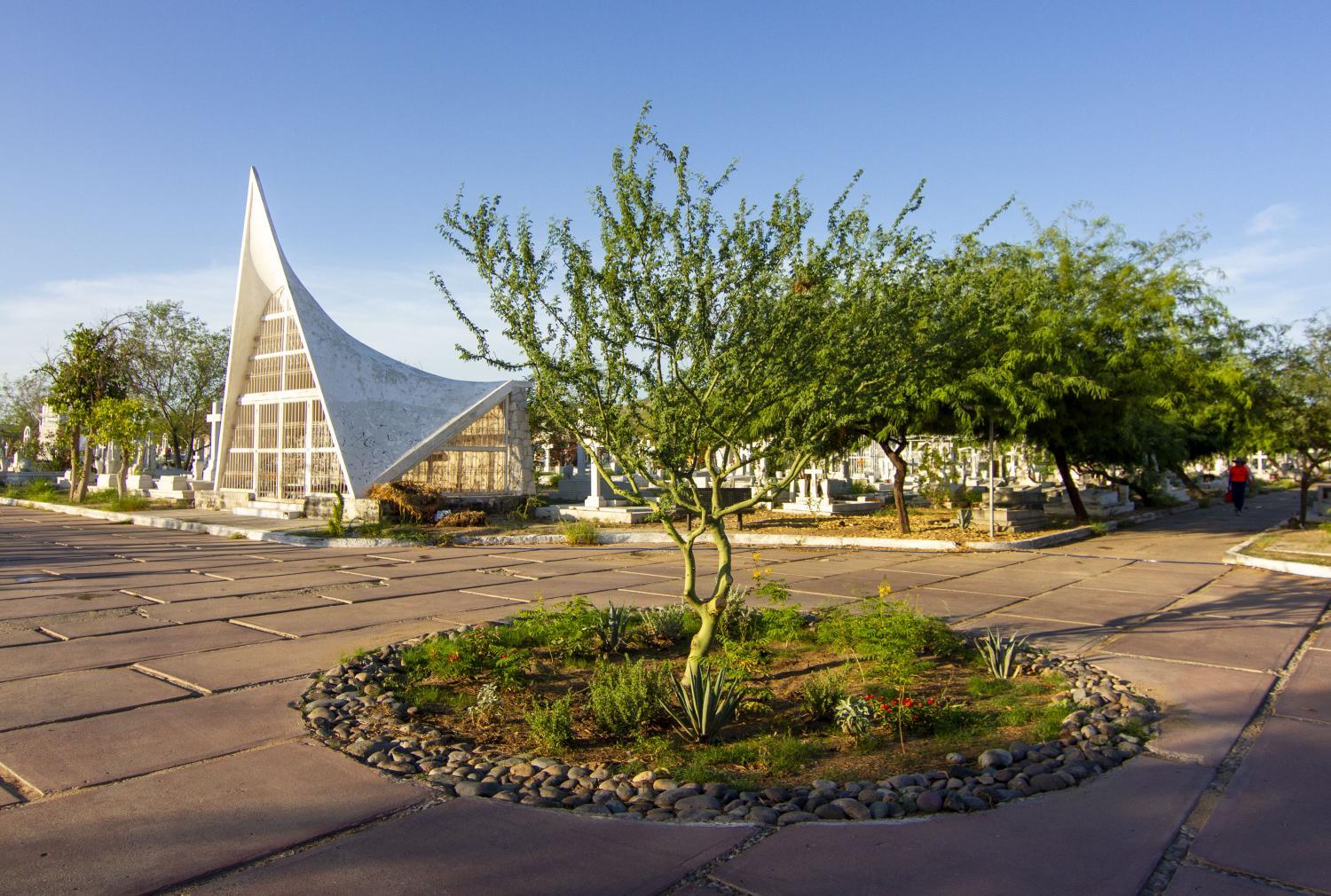 Kendal Blust/KJZZ
Volunteers planted a pollinator garden as part of their reforestation efforts in the Yañez Cemetery. 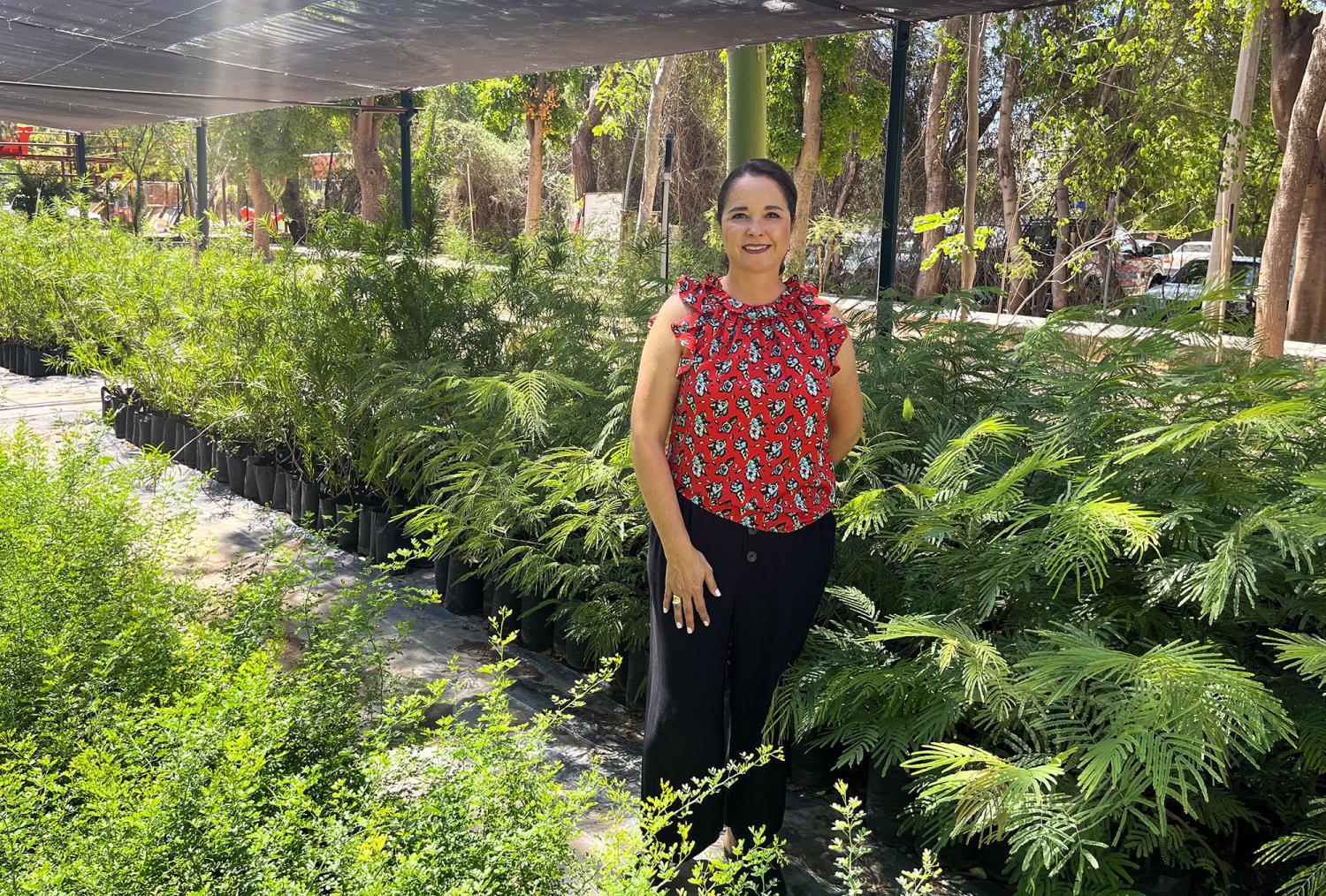