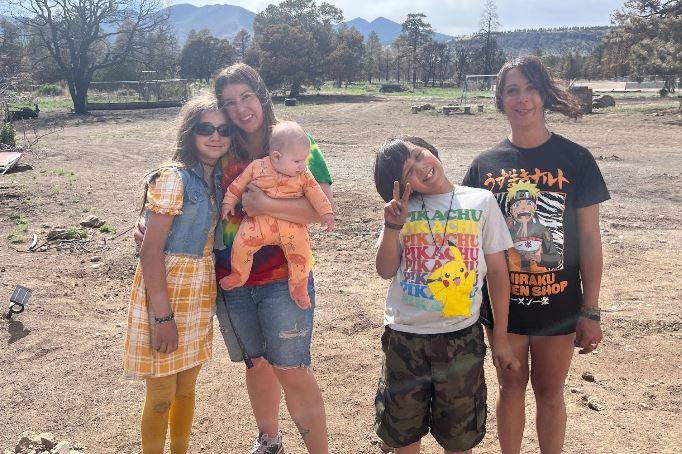 Anthony J. Wallace/KJZZ
Trisha Peralta (left), Jess Leazier (right), and their children stand at the Flagstaff property where they grew up, after their home burned down in the Tunnel Fire. Jess and her 10-year-old son live there today with Jess's father and her aunt.

The Leazier family has lived at the same Flagstaff property more than three decades. This past April, theirs was one of 30 homes that burned down in the Tunnel Fire.

The fire took nearly everything they had, including sentimental items that reminded them of the family’s mother, Monica, who died just months before the fire.

“It's like losing her all over again almost with how much stuff and love and everything she put into that house,” said Trisha Peralta, Monica’s daughter.

Peralta said that in the weeks after the fire, the family dug through the wreckage for anything that reminded them of their mother.

“A lot of it was going in there to fish for pieces of my mom,” Peralta said. “We had a day that was really hard because we were in the area where we knew my mom's ashes had been because we we’re planning to spread them and hadn't gotten around to it quite yet, so you're digging and start seeing lighter ash and you know—I'm not just digging through the ash of the house right now. This is the ash from Mom's little spreading urn.” 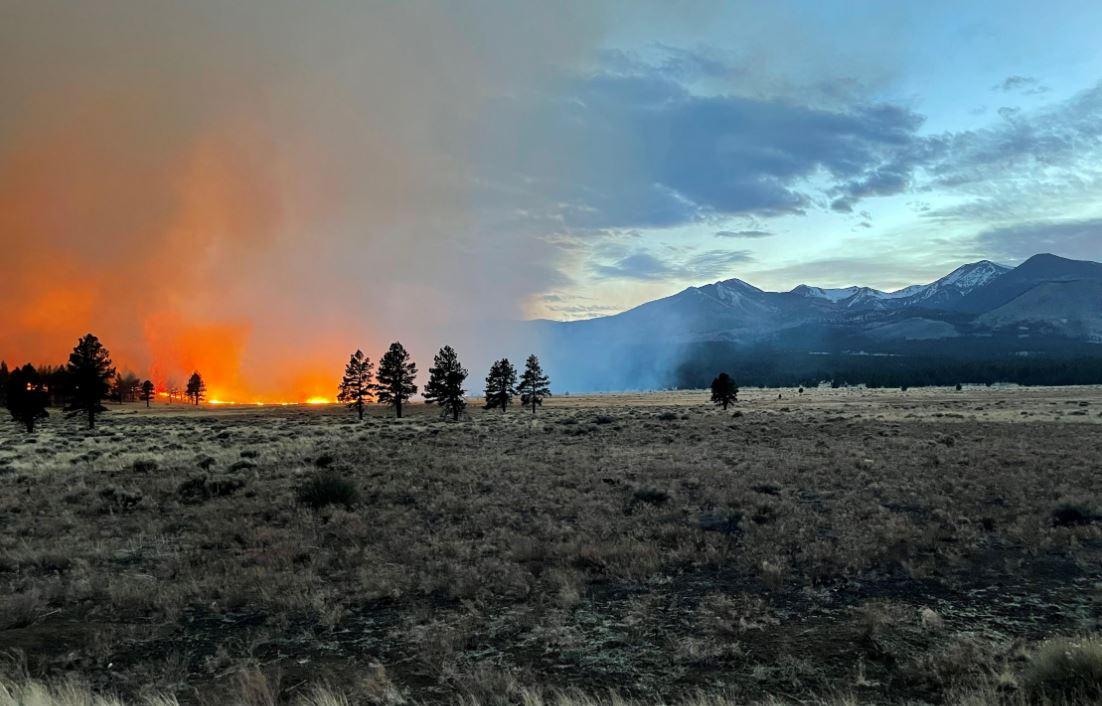 InciWeb
The Tunnel Fire as seen from Bonito Park in northern Arizona on April 19, 2022.

Peralta set up a GoFundMe for the family just after the fire. Although she’s long since moved out of the house and has a family of her own, she has made helping her family recover from the fire like another part-time job. She even got a new job that would allow her to take more time off to help.

Today, there is hardly any sign there had been a home on their property at all.

Today, four people live on the property — Trisha’s father, Eddie Leazier, Eddie’s sister-in-law, his other daughter, Jess Leazier, and Jess’s 10-year-old son, Zen. Rebuilding is a huge financial struggle for them. Eddie Leazier is retired now, Jess Leazier is a caregiver for her aunt — and they have to replace everything. 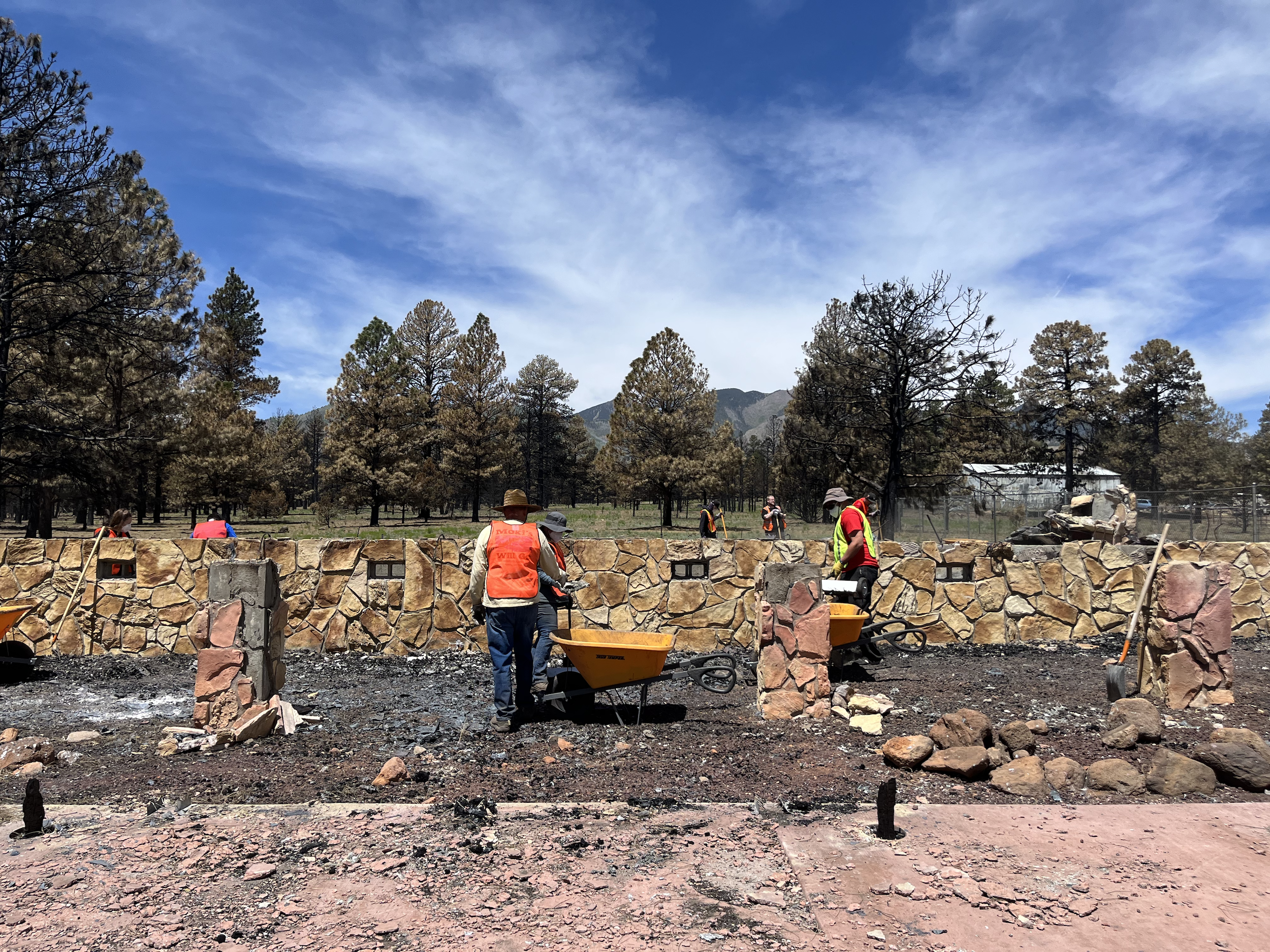 “It actually hits you more down the road, whenever you say, ‘Well, I got that.’ And you think ‘I don't have that. I don't have it no more, it burned down.’ That was kind of the worst part of it for me,” Eddie Leazier said.

The fire spread so quickly, they only had a few minutes to grab things before they evacuated.

“We basically made it out with the shirts on our backs,” Jess Leazier said.

When I visited them, they’d already cleaned up the whole site, with the help of volunteers. And they had purchased an old RV to live in on the property, with the help of their GoFundMe. The Leaziers do have homeowners insurance, but like most people who lose their homes in a wildfire, it will not cover the full cost of rebuilding.

“We do surveys after disasters in the areas where we’re working,” said Amy Bach, executive director of United Policyholders, an insurance consumer advocacy organization. “And it's been pretty astonishing how consistent the number is of people who self-report, ‘I do not have enough insurance to cover the cost of replacing the home that I had.’ And it's almost always two thirds.”

One reason underinsurance is such a big problem now is that building costs are rising quickly. But Bach said another is that insurance companies aren’t always upfront about whether a plan will cover the cost of rebuilding. So United Policyholders advocates for legislation that requires insurers to clearly communicate people’s coverage to them. 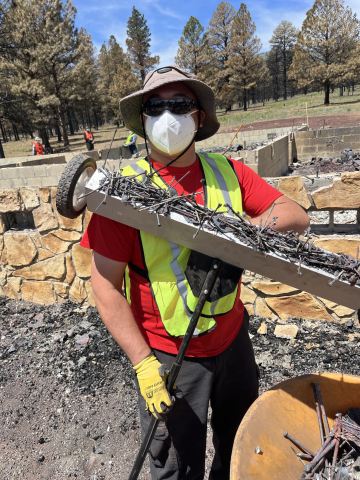 “Disclosure that you are under insured, that would be effective,” Bach said. “Just like you have warnings on pill bottles.”

Bach said she typically sees homeowner’s insurance payouts come up short by between $200,000 and $300,000. So people have to get creative when it comes time to rebuild.

“They just cobble it together and do what they need to do,” she said. “You build a tiny house, a smaller house, you cut corners, or you take out a loan.”

Or people start GoFundMe’s, like the Leaziers. Peralta said they got $136,000 for the house. The new one they want to replace it with costs $220,000. On top of that, she said they only expect to get about half the value of all of their other stuff that burned — including some of Eddie Leazier's valuable tools. So in total they're going to be short by about $150,000.

“Dad’s stressing that we're not going to have enough,” Peralta said. “Which is why I still have the GoFundMe going.”

But even with all the work and stress of building back, they never seriously considered moving away where the wildfire risk is lower.

“This is my spot and after I'm gone, it's going to be passed down to [my son] or one of the grandkids,” Jess Leazier said. “This is basically home, it's always been home. I'm not giving it up that easily.”