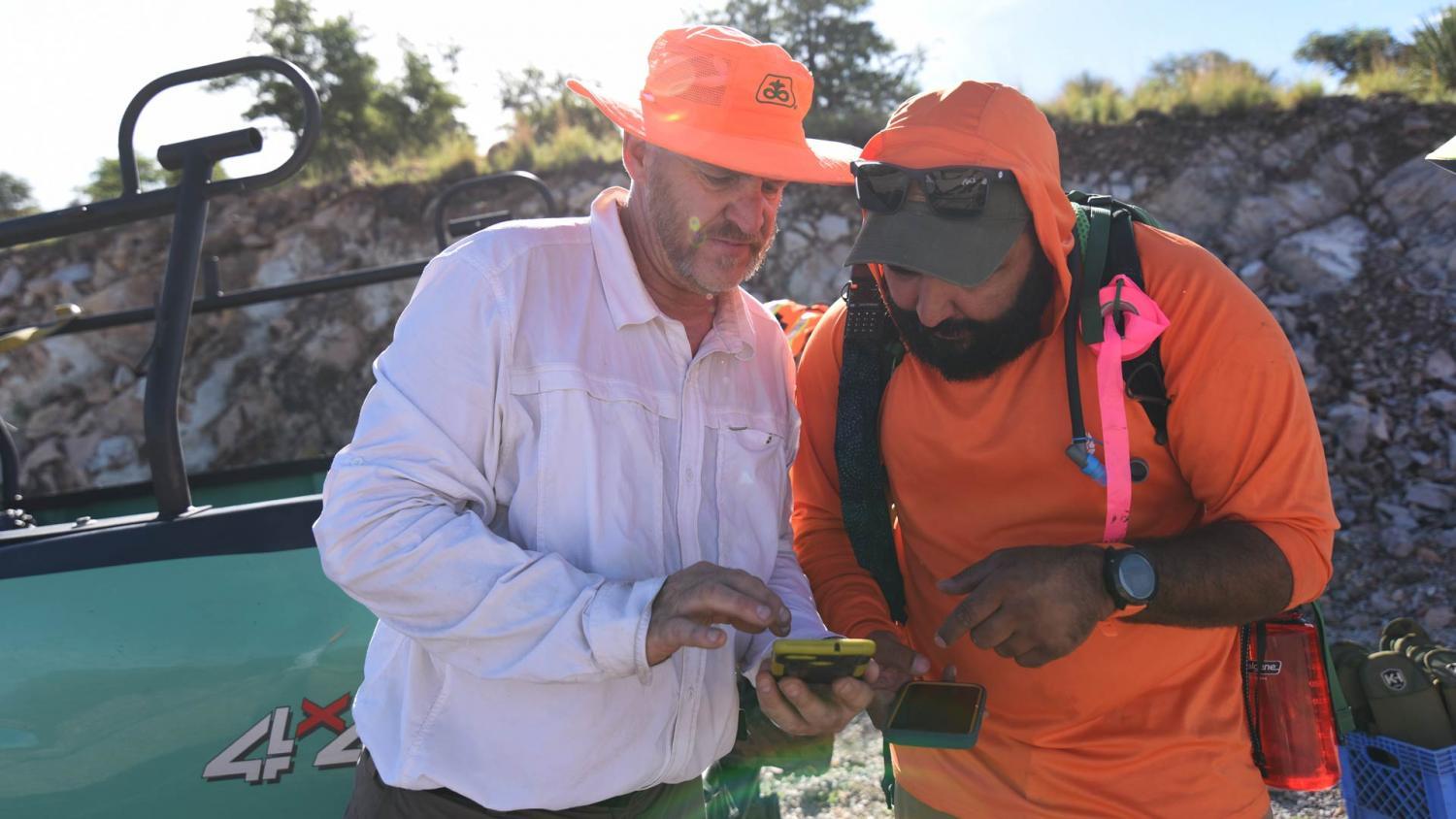 Alisa Reznick/KJZZ
James Holeman maps out the day's trek with Jasdeep Singh, another U.S. Marine veteran and Battalion volunteer. The group uses data from another aid group hat track locations where migrants have died to determine where to search.

The United Nations logged more than 700 deaths along the U.S.-Mexico border last year. It was the highest annual number since the agency began recording in 2014, and made the border the deadliest land crossing in the world for that year. Border-wide, this year is on pace to meet that record.

This is a look into one migrant’s tragic death in Arizona — and the challenging effort to find him.

It’s mid-July and the desert is green from the heavy monsoon. James Holeman is handing out walkie talkies, bright hats and extra water to a group of volunteers.

Holeman’s a tall marine veteran with a beard and mustache speckled with red hair. He founded the Battalion Search and Rescue in 2020. A few times a month, volunteers with the group fan out in Arizona’s vast, rugged borderland. They’re looking for people who need help, and those who have already succumbed to the harsh terrain. Today, they’re in an area outside Nogales.

Holeman estimates he’s found nearly 100 sets of human remains and bones searching the borderlands in California and Arizona over the last four years. One of his most recent discoveries was in June, during a solo mission some 200 miles west of here, near the Lukeville Port of Entry.

He found the body of a young man inside a cement culvert underneath a road used mainly by the Border Patrol and other law enforcement. It was just a few feet from the border wall.

“One of the things we look for is no roads, we want to go where there’s no roads, because this is where migrants are pushed to,” he said.

A photo Holeman took on that day shows a shadowed figure inside the pipe. A hand is reaching upward into the air. His fingers are rigid. The dark bollards of the steel wall are visible just past him.

“I was basically looking at a silhouette,” he said. “This is a very unusual case, you know, to find a person like that … in a culvert like that, right next to the damn border wall.”

Holeman was led right to the body by a set of coordinates provided by an aid group in California. It was one of three different sets of coordinates circulated in the hopes of finding one migrant, a Mexican man in his 20s who went missing in the Arizona desert almost three weeks before.

In June, a different aid group sent the Border Patrol two sets of coordinates they believed could belong to the man Holeman discovered. I joined agents to see where they led in August. One brought us to a bumpy dirt road along the 30-foot steel bollard wall in Organ Pipe Cactus National Monument. Another, believed to be where the man was left, was an almost straight line nearly four miles into the desert.

"So right now we’re exactly on the coordinates where the NGO reported where possibly there will be remains, and they said it was possibly the migrant that was left behind that was walking south because he had a leg injury,” Border Patrol agent Jesus Vasavilbaso said. 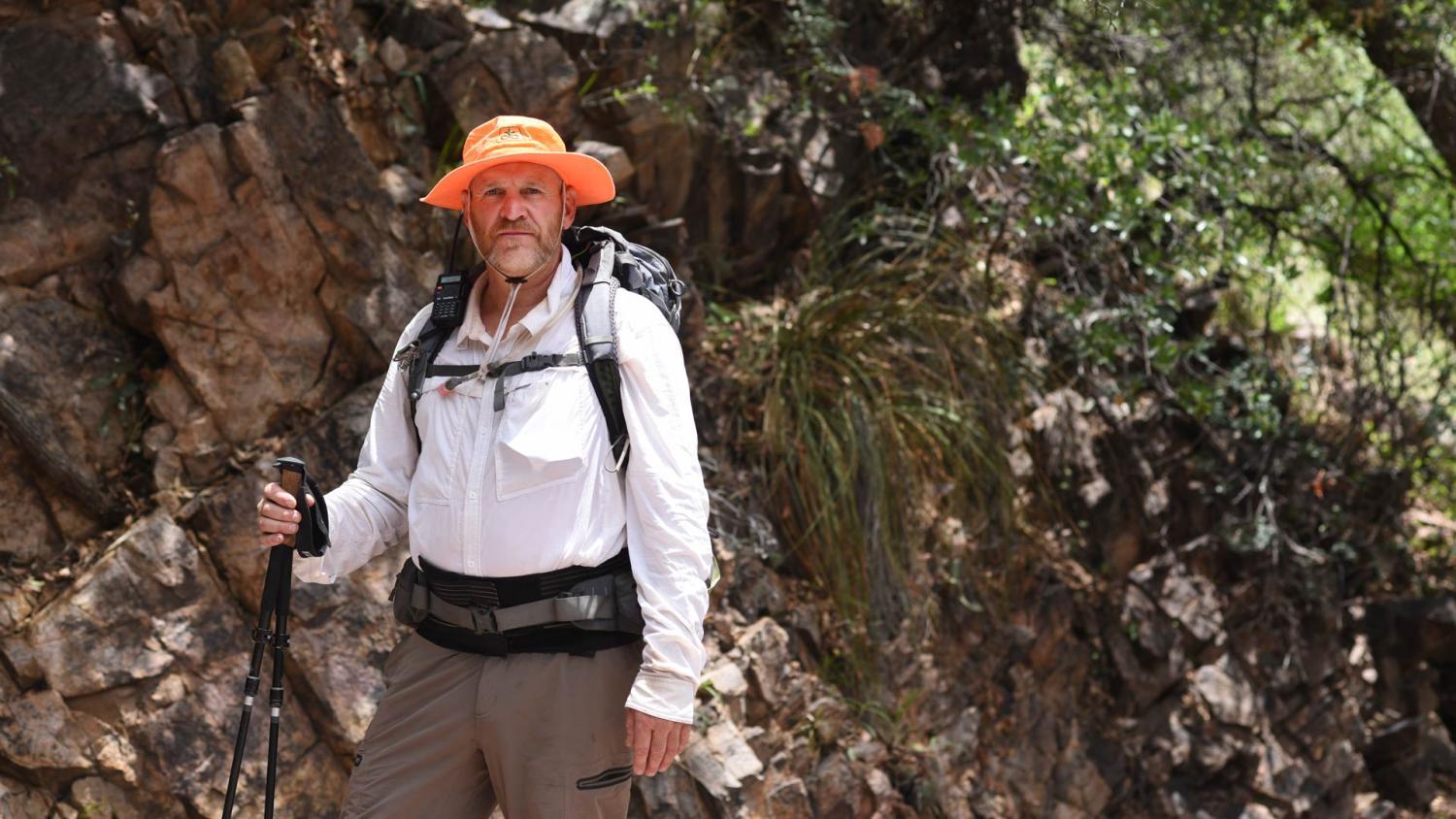 Alisa Reznick/KJZZ
James Holeman founded the Battalion Search and Rescue after working with California-based search groups. He says rather than looking for specific missing people, Battalion volunteers focus on general searches in areas where migrants are known to cross.

Vasavilbaso says agents went to both locations just a few days apart. But their search turned up no results.

The culvert where Holeman found the body was actually five miles further down the road. The coordinates they had weren’t accurate. Vasavilbaso says the agency wants migrants to call 911 if they have service, because coordinates taken during those calls are more accurate and can be triangulated from cell phone towers. He says the Tucson Sector has handled 3,000 911 calls so far this year.

Still, Jacqueline Arellano with Border Kindness, a border aid group in California, says that’s more than searchers usually have to go off. Arellano says migrants often don’t have cell phone service while traveling. A person might send coordinates for one location, but then keep moving. Other times, other migrants from their group send coordinates later on.

“From an outsider perspective, being like 'oh wow, there’s three sets of coordinates and they’re five miles apart, that’s really complicated,' it’s really sad, because that’s way better information than we usually have,” she said. “Which can give the impression of, we don’t know how many people are lost in the desert — it’s unbelievable.”

Arellano got a call from the Mexican man’s family a week after he went missing in Arizona. 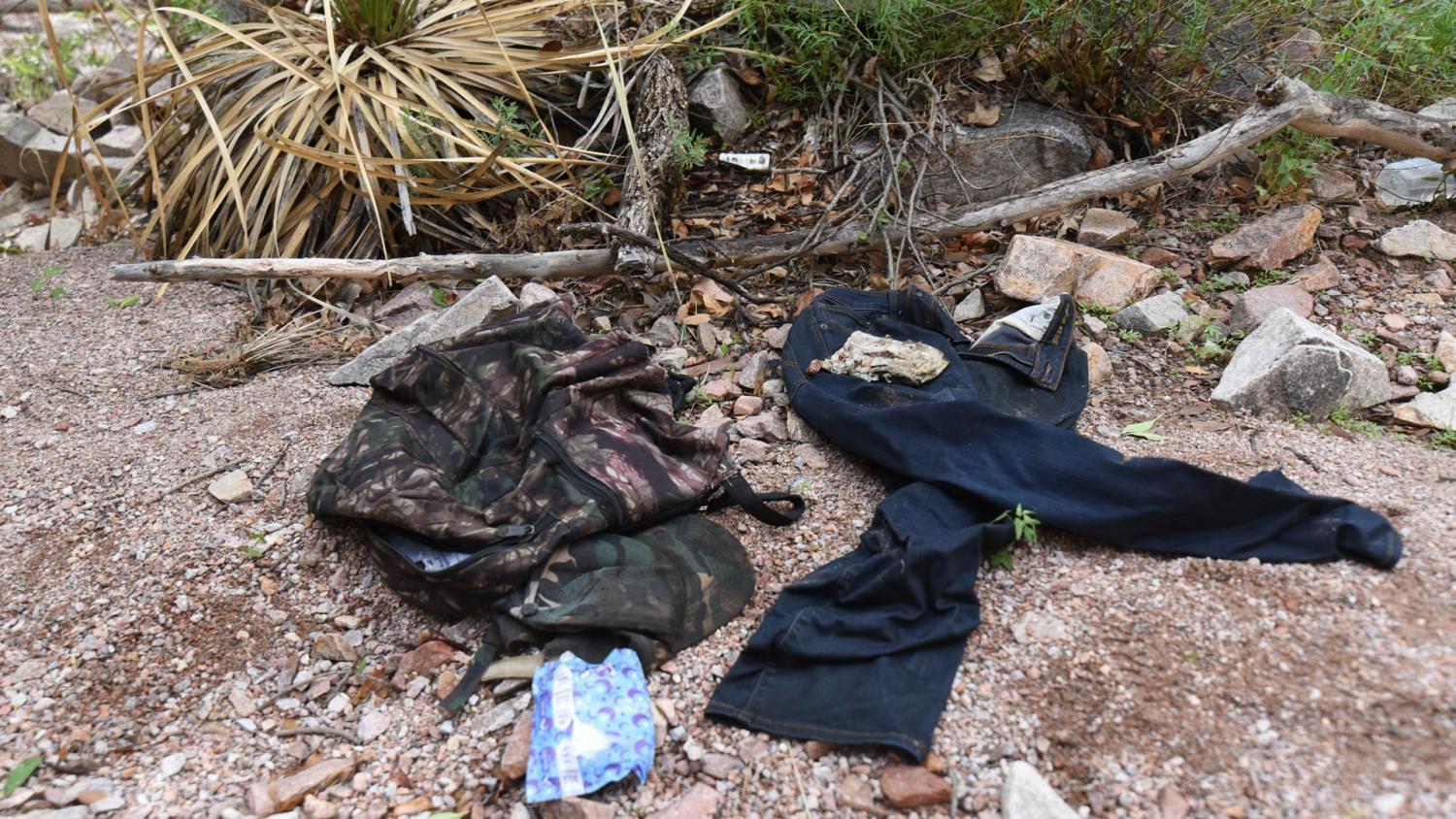 Alisa Reznick/KJZZ
Belongings like backpacks, jeans and medication are found left behind in a canyon a few miles from the border near Nogales.

“He had decided to turn back to Mexico, had contacted his family and said he was going to be at a certain location on the Mexican side, and then he wasn’t there,” she said. “A friend of the family [in Mexico] that had found the body then gave coordinates to the family member that contacted me, so that helped us to have something to initiate a search.”

Arellano reached out to Arizona groups with the coordinates. Holeman found the body later that same day.

Arellano did not send the coordinates to Border Patrol or other law enforcement because in the past, authorities have taken months to recover remains she has reported. She wanted to be sure the site was investigated that day.

“In any other park or wilderness that wasn't flanked with the border, a child pelvis, for instance, would initiate all kinds of law enforcement network responses in order to research and identify this child,” she said. “So ideally migrants would be treated like the human beings that they are, they wouldn't be put in these situations in the first place. And once they are in these situations, then they would be cared for and searched for like anybody else would.”

All told, three different aid groups, the Border Patrol and the Mexican consulate were involved with the search. But the man still wasn’t found alive. His body is with the Medical Examiner's Office in Tucson now. It could take weeks of months to confirm his identity. 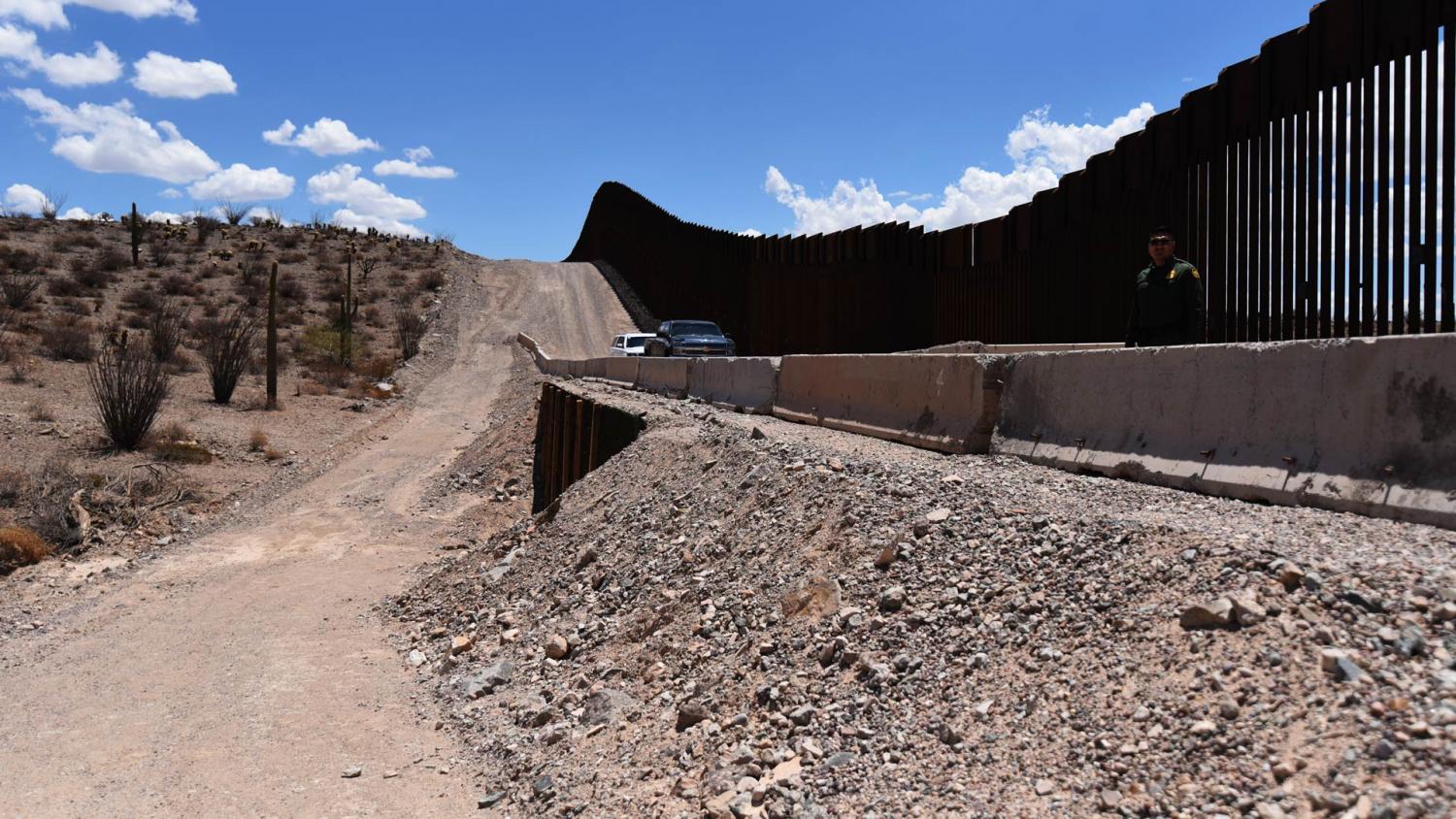 Alisa Reznick/KJZZ
The culvert where the body of a young man was recovered in June sits just past the Organ Pipe Cactus National Monument boundary, in the Cabeza Prieta National Wildlife Refuge.

It’s a complex and chaotic coordination that Rafael Barceló, Mexican consul in Tucson, knows well. Consular staff in Tucson and elsewhere receive calls from Mexican families with missing loved ones everyday. Barceló says getting GPS coordinates in recent years has helped. But it’s not a guarantee.

“Which is of course something very hard to grasp for the families who are frustrated because their loved ones aren’t being encountered,” he said.

More than 120 sets of human remains have been recovered from across the Arizona border so far this year. The body Holeman found in June was one of eight in the Cabeza Prieta National Wildlife Refuge, according to a count by Human Borders. Almost 4,000 sets of remains thought to be migrants have been recorded in Arizona since the 1980s.

Holeman suspects there are many more that may never be found because they’re in areas too remote to access by foot. Much of Arizona’s border is public land and protected wilderness with limited vehicle access. Holeman has asked for permission to use some of the access roads used by law enforcement for his searches, but those requests have been denied.

He says he wonders why, unlike fatalities in other public lands, these deaths aren’t being talked about.

“That’s crazy, we're in the wealthiest country in the world, and people are dying in our backyard here every damn day, you know, and we leave them, we leave them there,” he said.

Holeman says he wishes there was more effort from the federal government to change that. But, until there is, he says his group will keep searching. 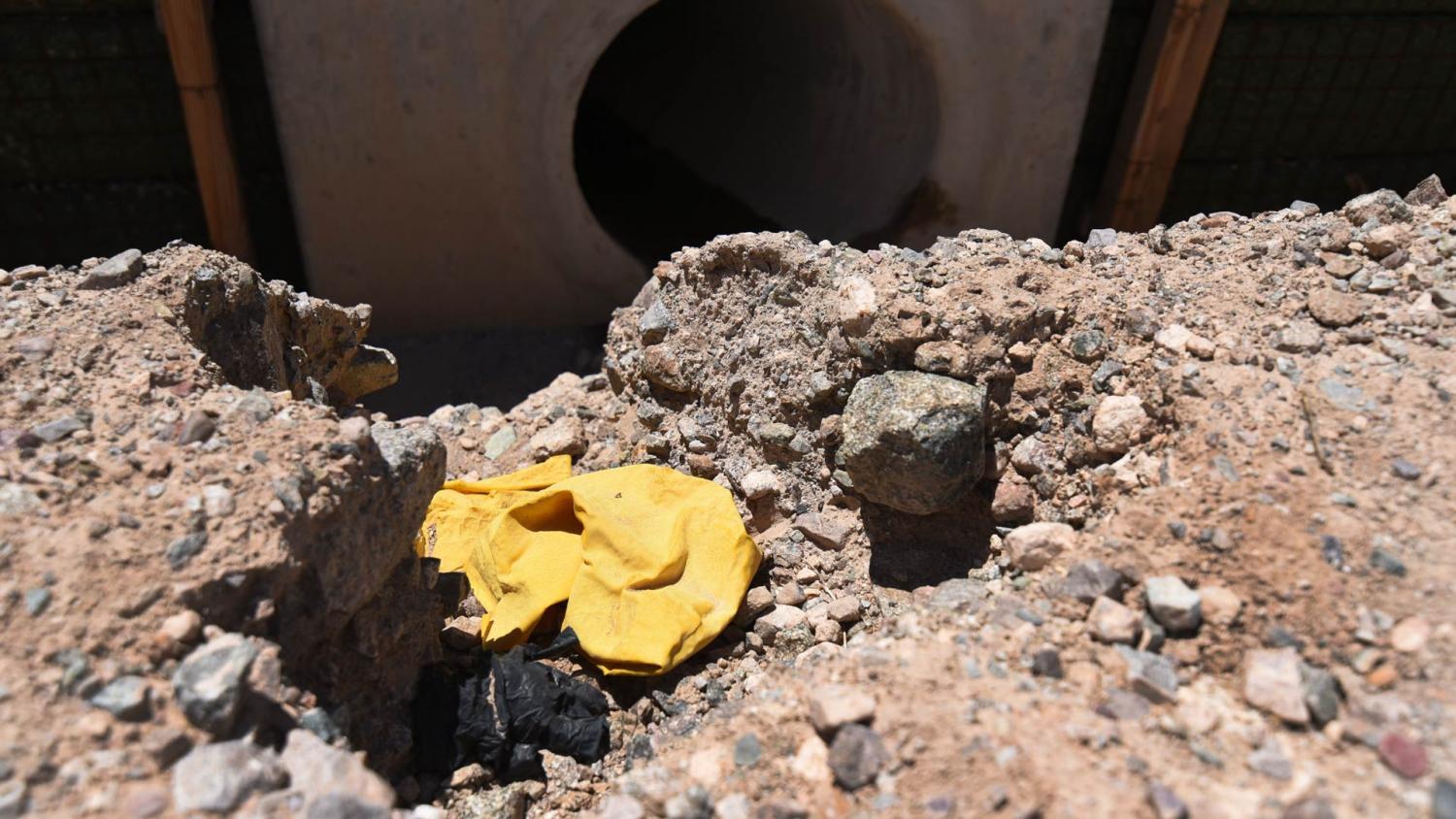 Alisa Reznick/KJZZ
A pair of latex gloves and arm protectors used by staff from the Pima County Medical Examiners Office lays at the site where a body was recovered in June. 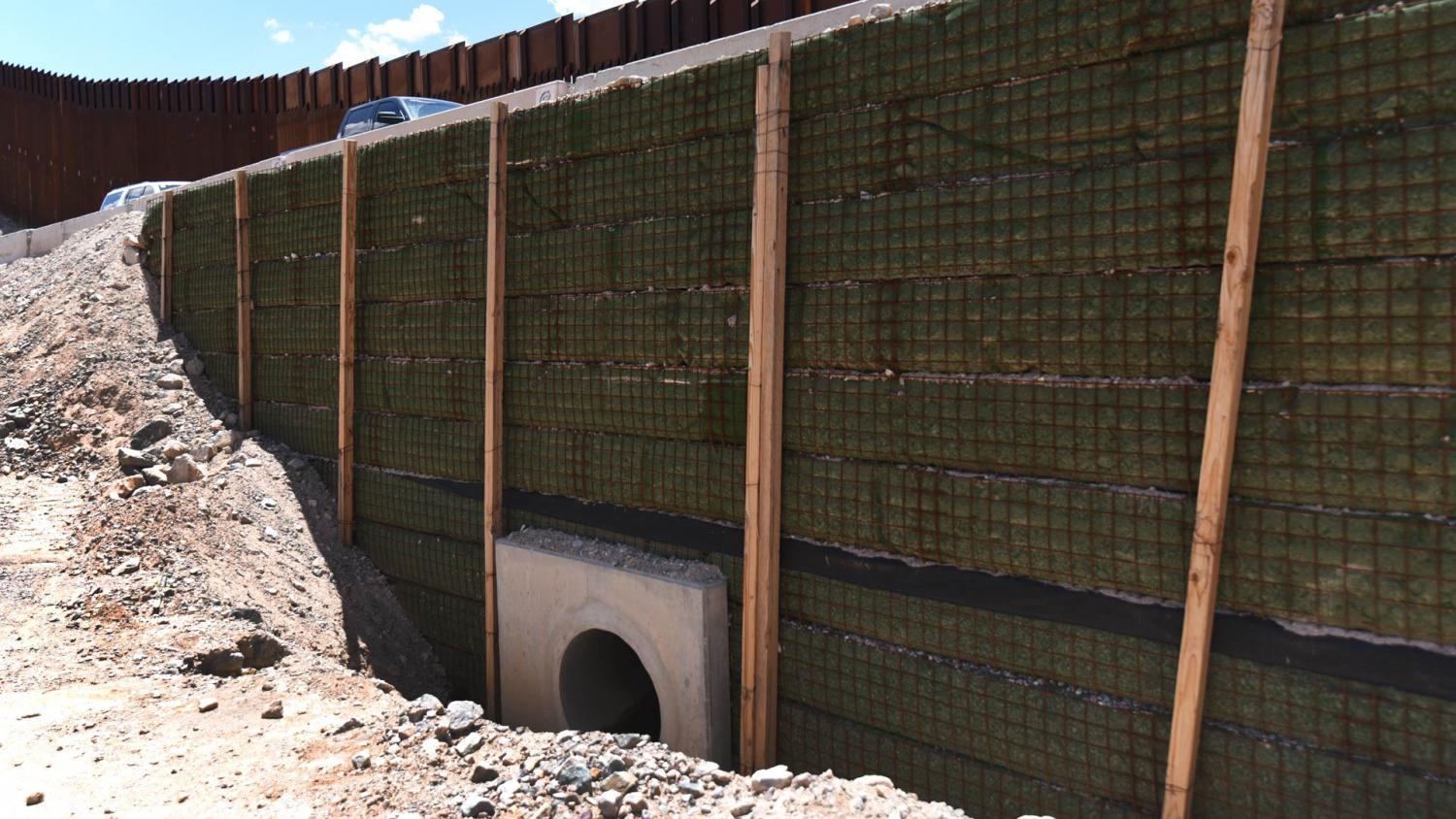 Alisa Reznick/KJZZ
Using coordinates provided by another aid group, James Holeman found a body in the cement culvert below a road used by the Border Patrol. Agents say they drive the road often, but don't always look under the road in culverts. 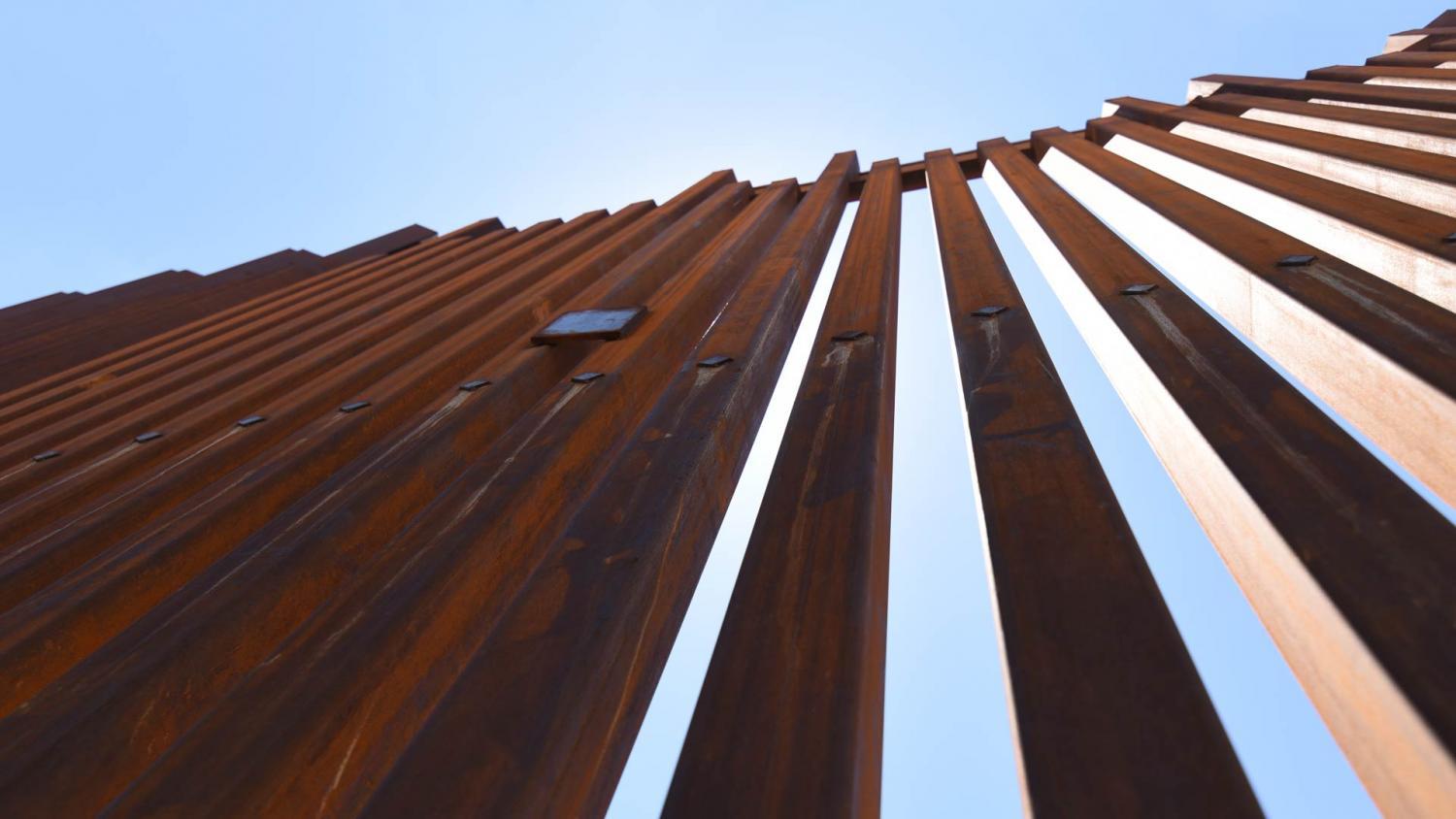 Alisa Reznick/KJZZ
The young man was found a few yards from the base of the 30-foot steel bollard wall. He is still being identified by the Pima County Medical Examiner in Tucson. 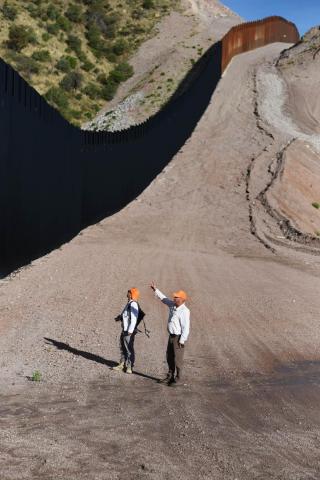