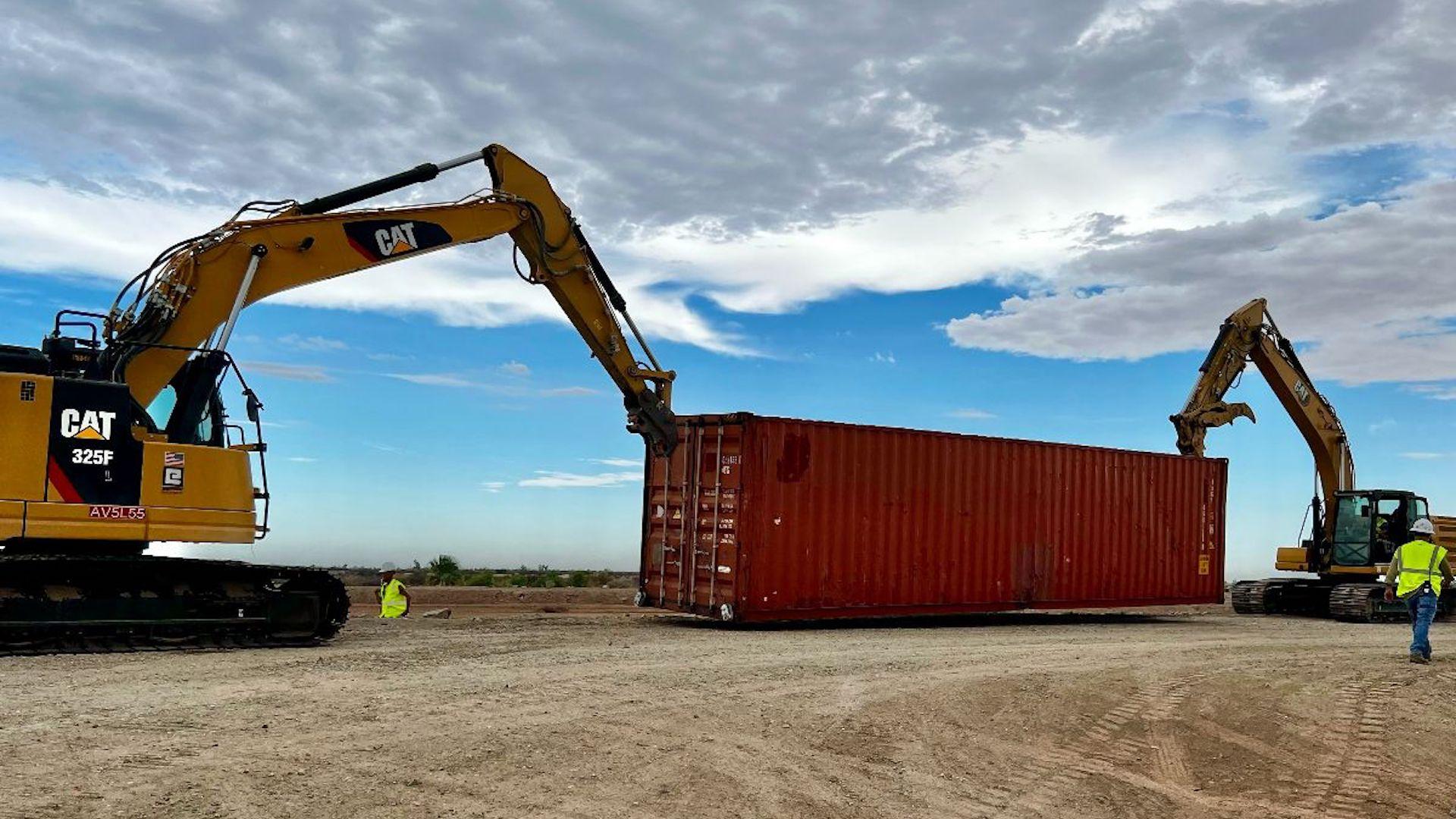 Office of the Governor
Gov. Doug Ducey's office said Aug. 12, 2022, that he directed crews to use shipping containers to close a gap in the U.S.-Mexico border.

The Cocopah Indian Tribe said Friday that the state of Arizona acted against its wishes by stacking shipping containers on its land to prevent illegal border crossings.

The tribe determined that the state put 42 double-stacked containers on its land near Yuma, said Michael Fila from its office of emergency management.

The tribe wrote state officials Tuesday to inform them of their findings and concerns. Fila said the containers block half of a two-lane road, closing a “vital evacuation route.”

The containers pose other safety concerns, including if the containers fall, Fila wrote. Two containers toppled during construction last month for reasons that are unclear.

“The integrity of the road itself has subsequently been damaged by the heavy machinery that was used in placing the shipping containers" and created the danger for first responders to get stuck, Fila said in an email shared with The Associated Press.

The tribe told state officials at a meeting Aug. 17 that it didn't want the barriers and is waiting on a response to its findings, said Jonathan Athens, a Cocopah spokesman.

“We had made it clear before that we did not want the containers on our land,” he said.

The tribe's findings are a potential setback to Gov. Doug Ducey, who said last week that the barriers were “a major step forward to secure our border.” Despite his claims, the barriers have so far failed to make a meaningful dent in illegal crossings in an area where hundreds have been entering the country daily.

Ducey spokesman C.J. Karamargin said Friday that he was aware of the tribe's letter but had no immediate comment.

The state installed 130 double-stacked containers in the Yuma area last month in an effort to close gaps in the imposing wall built during Donald Trump's presidency that were incomplete when he left office last year. The Biden administration said in July that it would plug gaps but Ducey said he couldn't wait and hired AshBritt Inc. to install shipping containers the length of 13 football fields in five areas.

The containers that the tribe says were installed on tribal lands extend into the desert, ending abruptly in an area where migrants can easily walk around it.

The area includes rights of way for people outside the tribe to travel, which may have created confusion, said Fila. In any case, the tribe said state officials did not consult them before building.

The episode is a reminder of obstacles that the government faces with border barriers: difficulty building on tribal land, most notably in the Tohono O’odham Nation in Arizona, and opposition from landowners, especially in Texas, where, unlike other border states, much property is privately owned. Migrants go around the walls.

About half of encounters with migrants crossing the border illegally in the Border Patrol's Tucson, Arizona, sector are in the Tohono O'odham Nation, up from 20% to 30% before walls were built just outside of the tribe’s land, said John Modlin, the sector chief.

The Cocopah expressed strong opposition to a wall in a letter to U.S. officials in May 2020, saying the barrier would cut access to the river and tribal members in Mexico.

The tribe recently released a video showing its interim police chief, Arlene Martinez, outlining other cooperative measures with the Border Patrol, such as surveillance cameras and ground sensors.