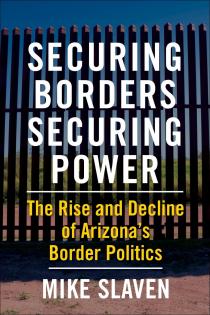 Rhetoric related to immigration and border security becomes more intense during election season in Arizona, as many Republican candidates are filmed at the state’s southern border in a display of how focused they are on the problems they associate with that area.

And the state’s history with the immigration enforcement law SB 1070 is a clear example of how elected officials took a harder line, even when it’s contrary to what much of the voting public wants on the issue.

In his new book, "Securing Borders, Securing Power: The Rise and Decline of Arizona’s Border Politics," Mike Slaven covers several different angles on immigration policy in the state — including why SB 1070 was passed and signed into law, and why Arizona didn’t continue to move in such a conservative direction on immigration.

The Show spoke with him about the state of immigration policy, and the conversation began by asking why so many politicians and other officials focus on the security aspects of it, when there are many other components at play.