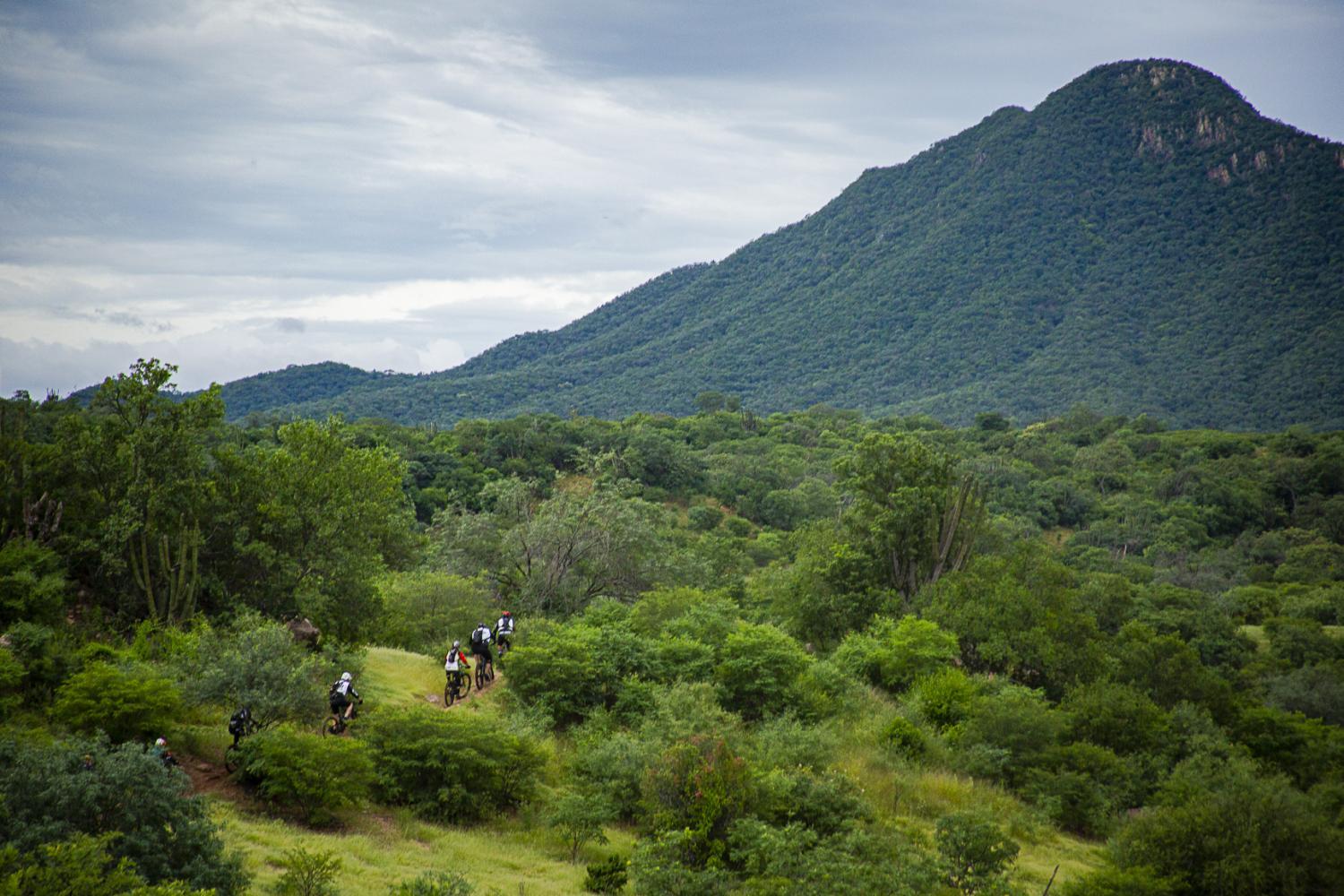 On a recent humid, late afternoon, about halfway between Navojoa and colonial Alamos in southern Sonora, local mountain bike booster Fernando Santini was gearing up for a ride — and rallying the troops.

A sizable group assembled at the entrance to the Bachaca Trail System and, with shouts of ¡Vámonos!, they rolled out in a winding single file line.

At the front, Santini led the group through the dense, low-hanging trees, so tight it felt like a tunnel at times. And then up to small rises that offer sweeping panoramas of Mexico’s northernmost tropical deciduous forest. It’s an otherworldly landscape, with house-sized columnar cactuses intermingling with the trees, whose canopies burst with the summer rains, and all but vanish in the dry months.

Scattered throughout the sizable trail system are ramps and jumps that send riders flying, as well as steep, punishing climbs. On one particularly brutal uphill, Santini said that conserving your energy is the key.

Or just hopping off and walking up, as rider Carlos Amaya did, something he said there’s never any shame in.

“I’m beat,” he said with a laugh. “This is where the hard part starts.” 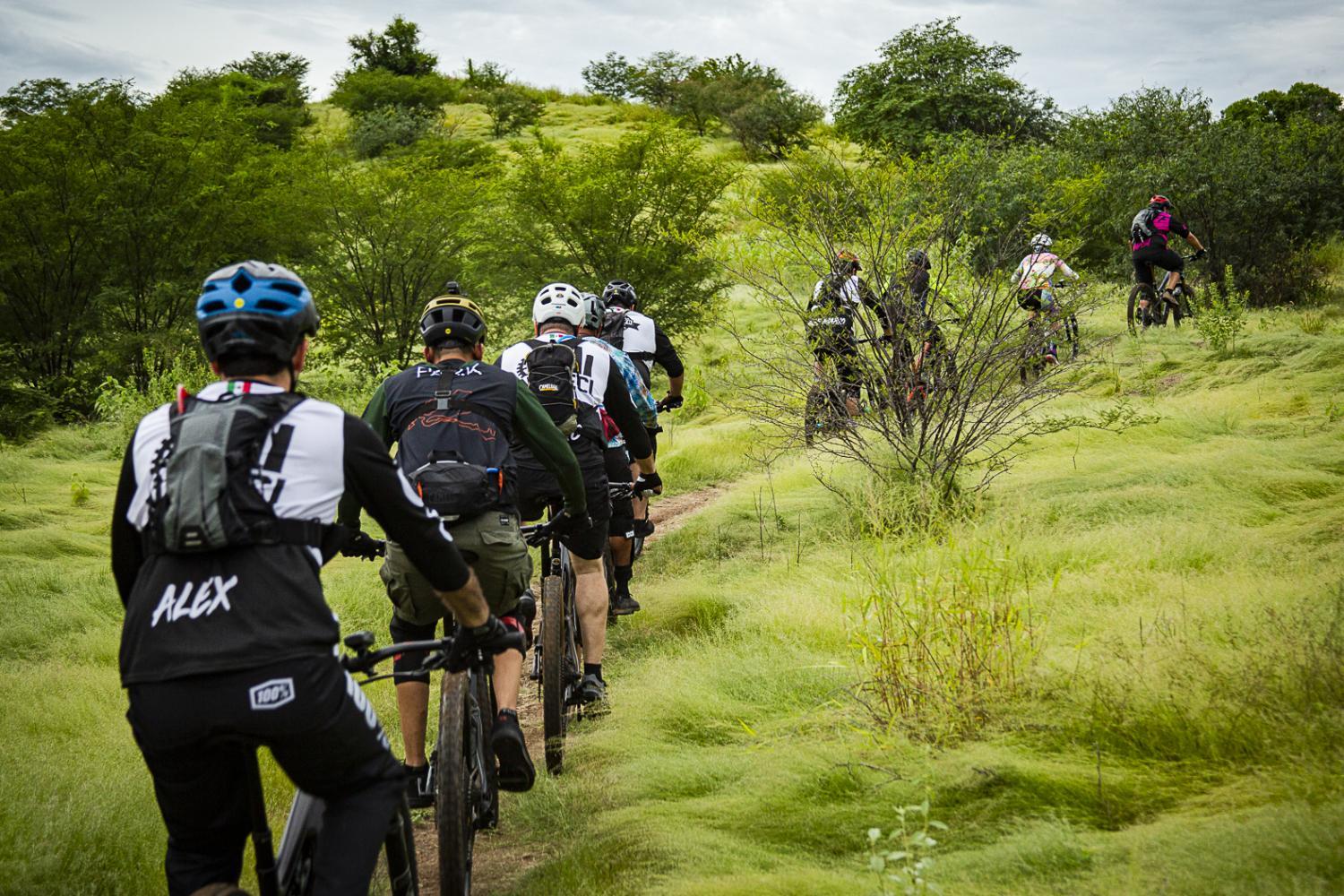 Murphy Woodhouse/KJZZ
Riders grind up a hill in the Bachaca Trail System in southern Sonora.

Bachaca is a fairly new addition to a growing network of trail systems that flank the highway connecting Navojoa and Alamos, which itself has miles of singletrack in the nearly 300-acre park and conservation area known as La Colorada.

It took Santini about 30 seconds to rattle off their names, which include Torres, Animas, Jubileo, Novatrack, Oreganos, Santa Cruz and Uvulama.

At a minimum, the corridor now has around 75 miles of regularly maintained dirt trails at all skill levels. On top of that, there’s the private bike park Capital Flow, which is equipped with a massive airbag for more safely attempting limit-pushing aerial tricks and where Santini is a partner, as well as the Cacharamba downhill area.

One of the main forces behind new trail building and maintenance is NADESI, an organization that Santini founded with several others in response to the loss of a couple key trail systems several years ago. It stands for Navojoa Cycling Destination.

“Its name is our vision,” Santini said.

There are many bike clubs across Sonora, but the now roughly 40 NADESI members pay monthly dues, which in turn pay a small crew to build and repair trails.

If all goes according to plan, the long-term goal for NADESI is to turn the corridor into something like a Sonoran Moab, or Crested Butte, a magnet for riders near and far like the well-known US cycling hotspots that have served as inspiration for many here.

“We’re really getting up there,” Santini said, switching to English. “We’re going to be competing against any trail anywhere. We’re in our diapers right now, but we’re getting there. We’re gonna get walking, and eventually we’ll get running.” 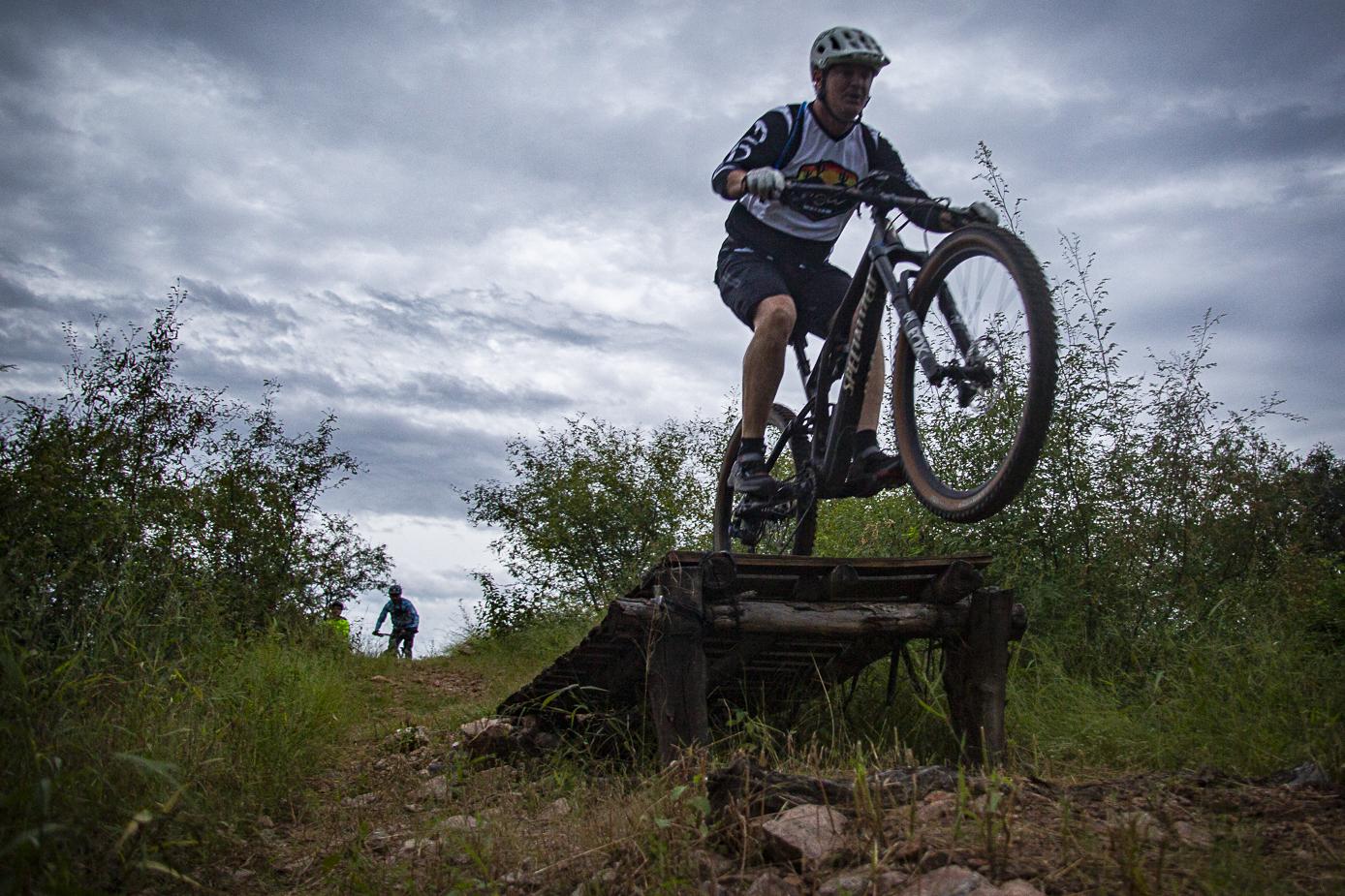 To keep out of the evening rain after their rides, dozens of cyclists gathered in the open-air two-story restaurant at the Capital Flow bike park. Among them was Cecy Ozuna, a local outdoor guide who’s been riding for about 15 years.

“In Navojoa, there weren’t that many of us mountain bikers,” she said of those early years.”I think we all knew each other.”

Now the boom has swelled their ranks. Most there that evening were locals like her, but physician Gabriel Suarez had flown all the way from Aguascalientes in Central Mexico on a cycling vacation because of what he had heard about the area.

“I didn’t know Navojoa, it had never even crossed my mind,” he said.

Despite being a relatively small city, he said the proliferation of trails here far outstrips what’s going on in Aguascalientes, a state capital of nearly 1.5 million people — nearly nine times Navojoa’s size.

“The growth they’ve had here is exponential,” he said.

The late summer’s heat and humidity hit him hard the first day, but the next day, aided by electrolytes and a lot of water, he had exactly the sort of ride he came for. He said he’ll be spreading the word when he gets back home. 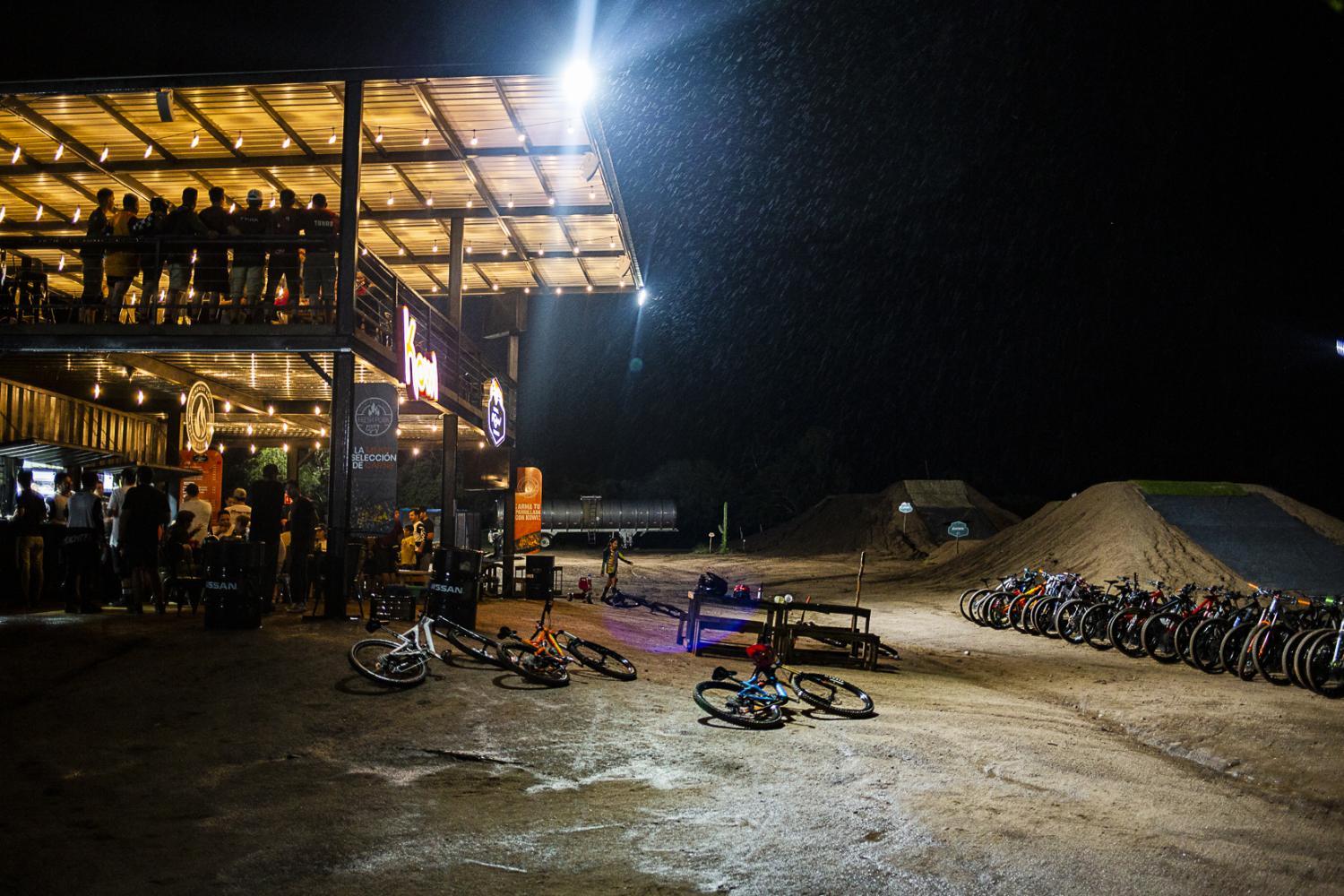 North of the border in Arizona, some also see a lot of potential for gravel riding in southern Sonora.

“It got on my radar when I was eight years old,” said Heidi Rentz, who started the Patagonia-based The Cyclist’s Menu with her husband, Zander Ault, in 2015. The two organize fully supported, days-long gravel cycling camps.

Rentz’s family regularly visited Alamos when she was growing up, but it wasn’t until a 2019 Christmas gathering there that she saw its promise as a gravel destination. As with so many plans, the pandemic delayed things, but earlier this year they started putting the pieces together for their company’s first Alamos tour next spring.

If all goes well, she thinks the camp could put the region on the map for Arizona cyclists, especially, she said, those “up for more of an adventure than just driving to Moab.” 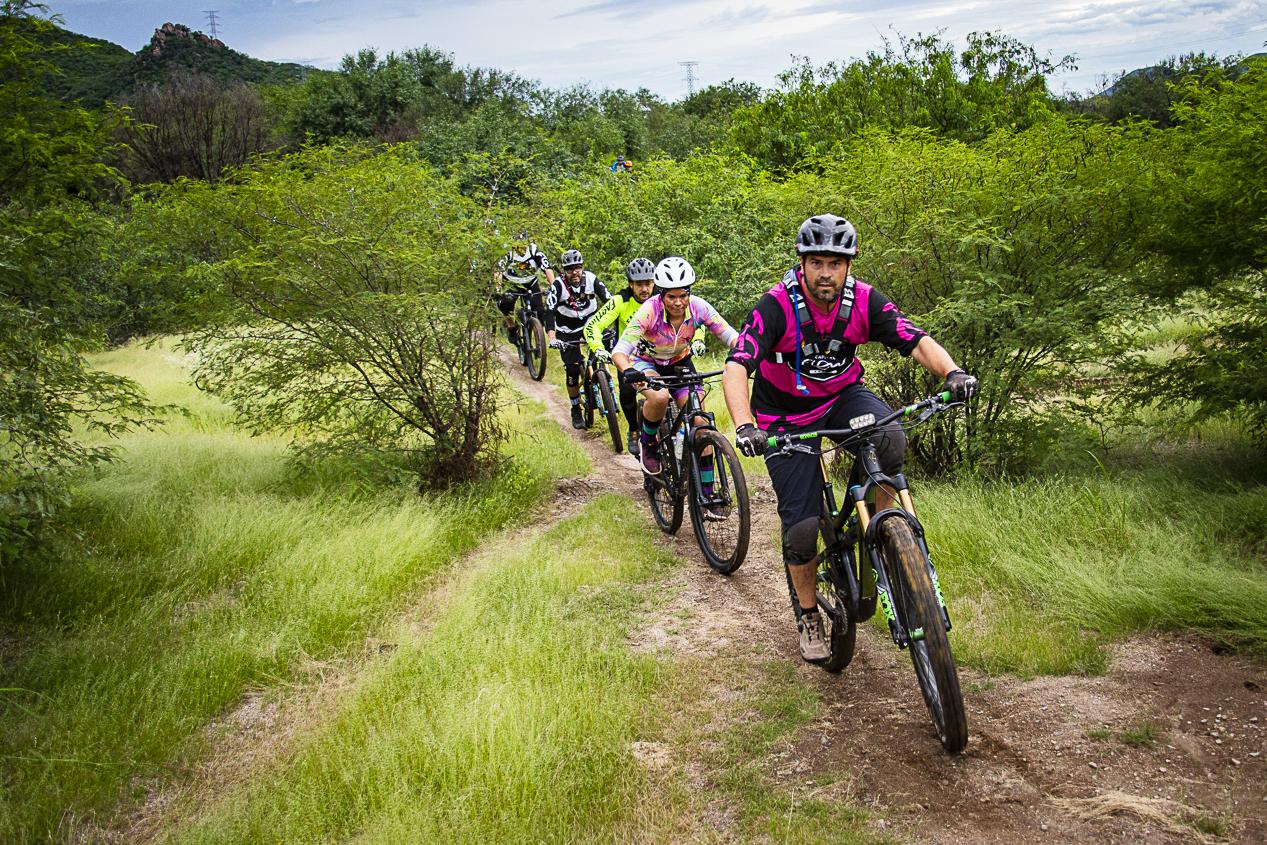