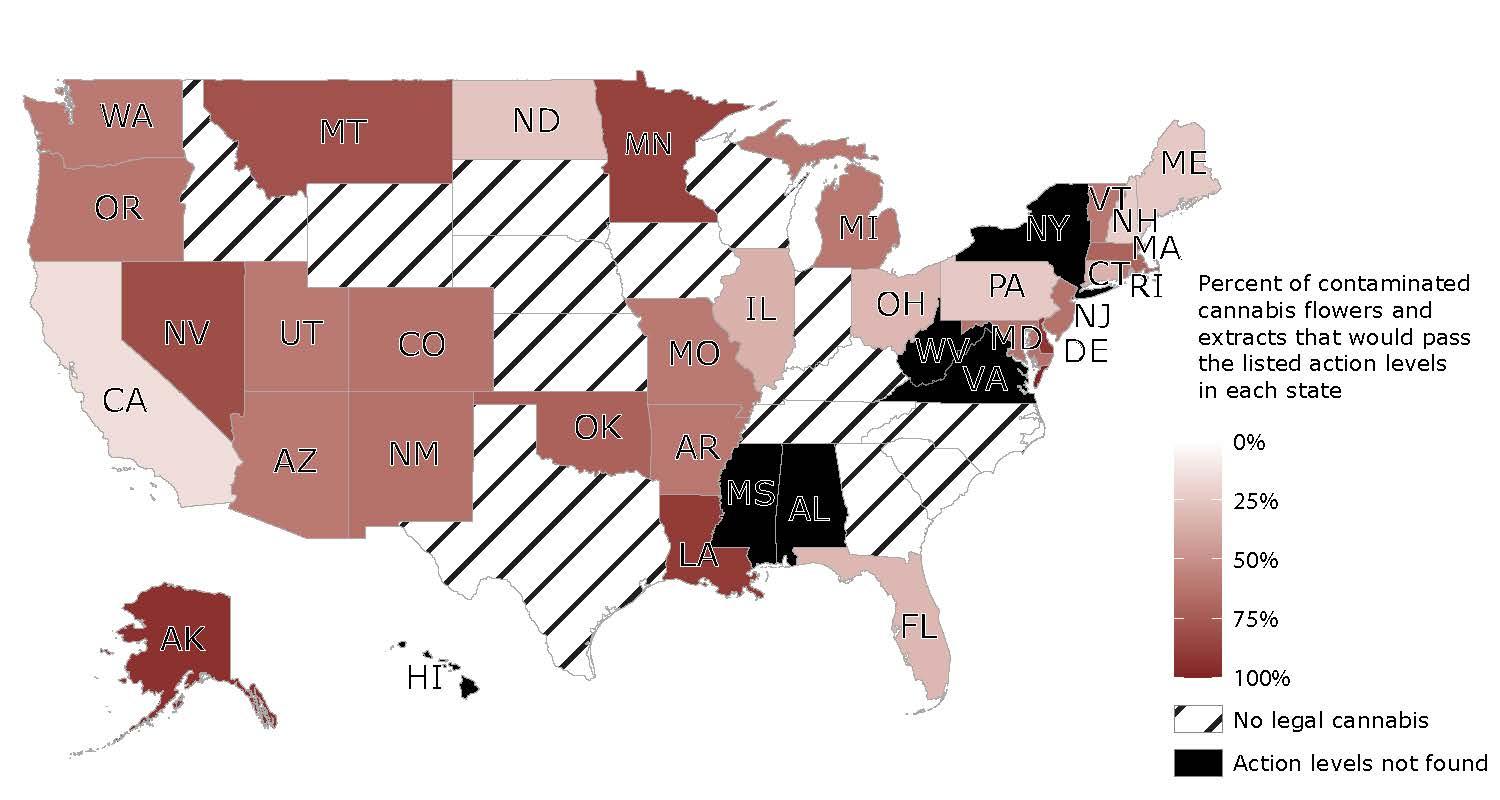 Reproduced from Environmental Health Perspectives with permission from the authors.
The percentage of the contaminated California samples studied that would have passed various state regulations.

As Arizona approaches the two-year anniversary of marijuana legalization in November, many health and safety questions about cannabis as a consumer product remain unanswered.

“It’s helpful to know about the safety testing in the cannabis products that they buy,” said senior author Maxwell Leung, an assistant professor in ASU’s Pharmacology and Toxicology Program.

Because the federal government still lists cannabis as an illegal Schedule I substance, it isn’t regulated by agencies such as the FDA or USDA.

That leaves health and safety regulations up to individual states. The result is a crazy quilt in which standards vary substantially in scope and content from jurisdiction to jurisdiction.

Because its Schedule I status also makes researching cannabis in clinical settings difficult – especially when federal agencies like the DEA, FDA and National Institute on Drug Abuse must sign off on such research – those regulations often lack essential exposure and toxicity data.

When researchers surveyed current state-level regulations, they found 679 contaminants listed across 36 states and the District of Columbia as regulated in medical or recreational cannabis, including 551 pesticides, 74 solvents, 12 inorganic compounds, 21 microbes, 5 fungal toxins and 16 other contaminants.

The list included 42 legacy pesticides no longer registered for agricultural use in the U.S.

“I think there's this perception that cannabis is a natural alternative to conventional medical treatment, but really cannabis is just like any other agricultural commodity, right?” said Lung. “Sometimes it involves the use of chemicals, there are metal contaminants and the extraction process can get contaminated by solvent residue.

The team also data-mined testing records for about 6% of California’s legal cannabis production from 2020-2021. They found an overall failure rate of 5.1%, ranging from 2.3% in cannabis flower samples to 9.2% in extracts.

Concentrations of some contaminants can reach levels 1,000 times higher in cannabis extracts than in the smokable flower.

“I think the manufacturing process with cannabis extract makes it susceptible to contamination. So, that's why we see more contaminant in the extract compared to flower,” said Leung. 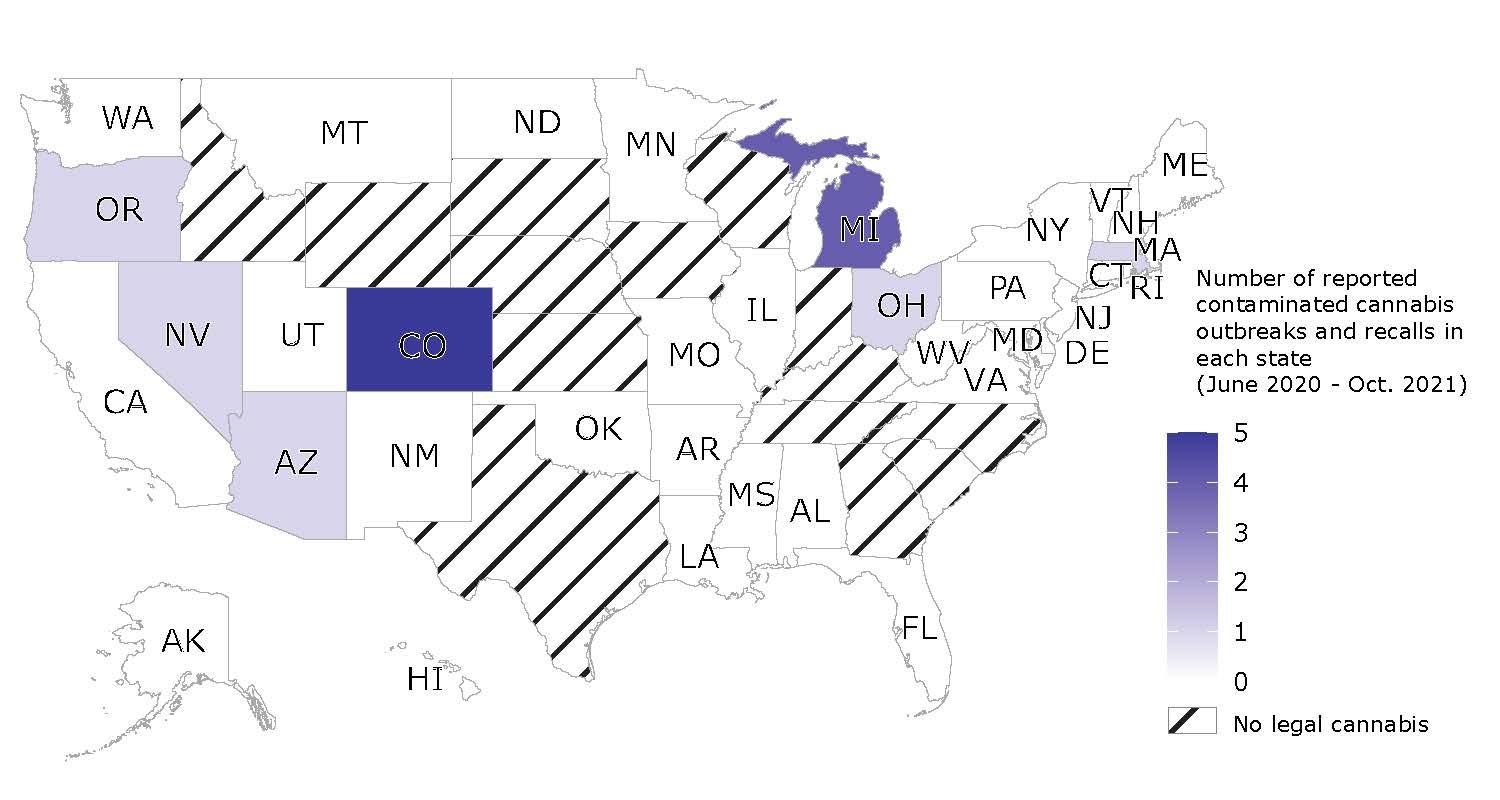 Reproduced from Environmental Health Perspectives with permission from the authors.
The number of contaminated cannabis outbreaks and recalls in each state (June 2020 - Oct. 2021), based on news reports.

Insecticides and fungicides — particularly boscalid and chlorpyrifos —predominated among the contaminants.

Leung says experts and regulators lack the data on contaminants needed to determine whether the possible health benefits of cannabis products outweigh the risks, especially for people already weakened by illness.

“I think there is an important public health risk to those patients who might be exposed to these contaminants,” he said.