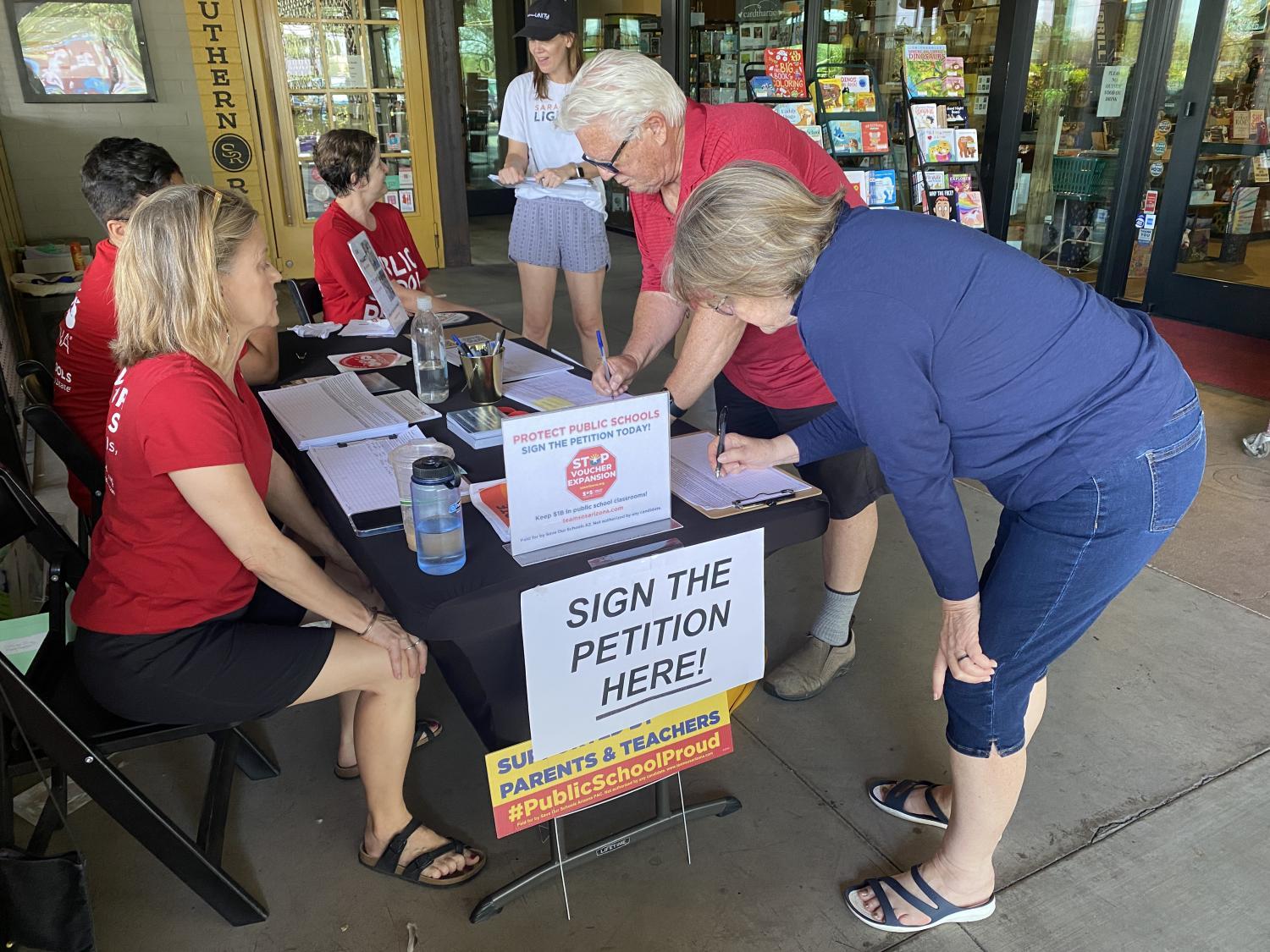 Bridget Dowd/KJZZ
Save Our Schools Arizona volunteer Sharon Kirsch talks to voters as they sign the latest SOS petition to refer school voucher expansion to the ballot in August 2022.

Secretary of State Katie Hobbs said in a tweet Friday morning that the petition from Save our Schools Arizona would not meet the minimum requirement of 118,823 signatures.

At a protest at the state Capitol on Wednesday, Gov. Doug Ducey called on Hobbs to expedite the count.

“It's time to put these parents first. Arizona is going to be a state that funds students, not systems," he said.

On Oct. 23, Save Our Schools estimated that they had turned in 141,714 signatures. The Goldwater Institute, which supports the voucher expansion, quickly called that number into question.

Hobbs previously tweeted that under state law, her office has a 20-day signature review period. Within a week, they had surveyed enough to know the petition would fall short.

We have informed the SOS committee that the referendum will not qualify for the 2024 General Election Ballot. While the statutorily required review continues, our office has inspected enough petitions & signatures to confirm that the 118,823 signature minimum will not be met. pic.twitter.com/UVydtBH5oi

Save Our Schools Arizona Director Beth Lewis said the group is devastated.

“There are folks who’ve come to me and said ‘Gosh, I wish I would’ve done more.’ I don’t think anybody should blame themselves, but more organizations could’ve stepped up and we’re hoping for the next battle, more people will fight the fight.”

She also said they overestimated the number of petitions.

“We had people driving down from Navajo Nation at midnight and driving up from Tucson at 3 [o'clock] in the morning and shoving petitions in boxes like at the Capitol when we were turning in. And unfortunately that just led to miscounts that we can’t recover from.”

“Gov. Ducey waited 10 days to sign the bill, deliberately taking 10 days out of our field,” Lewis said. “If you’ve ever been part of a referendum, that’s a massive amount of time and really prevented a lot of voters from getting to have their voices heard.”

The new law makes all Arizona students eligible for up to $7,000 per year to use for private school or homeschooling. An estimated 60,000 private students and about 38,000 being homeschooled immediately became eligible in September.

Some of those students already received vouchers, and many get money from groups like School Tuition Organizations that funnel tax credits to students.

This is not the first time Save Our Schools has led a citizens’ referendum. The group formed in 2017 specifically to refer another voucher expansion bill to the ballot.

The last referendum was a success — voters rejected the smaller voucher expansion 2-1.

In response to Hobbs’ announcement, Gov. Ducey simply tweeted a link with the words, “Let’s roll!”