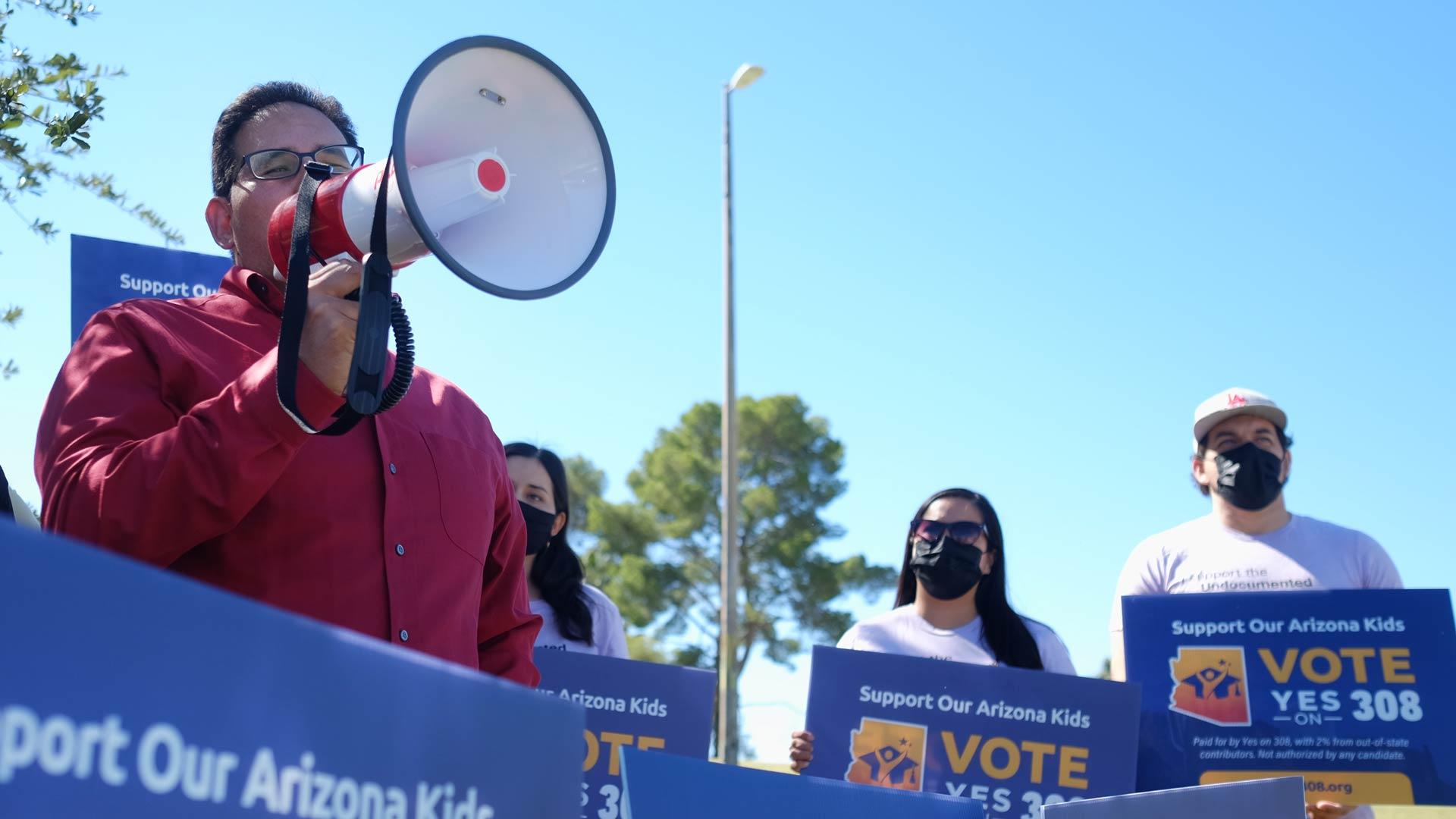 Alisa Reznick/KJZZ
Supporters of Proposition 308 speak at a rally and canvassing event in Tucson.

Early voting began Wednesday in Arizona. Undocumented students and advocates in Tucson marked the day with a canvassing campaign for Proposition 308.

The measure would give all students who graduate from an Arizona high school and live in the state for at least two years access to in-state tuition, regardless of immigration status.

About a dozen people gathered at a park with a megaphone before heading out to knock on doors for the afternoon.

“So to remind voters that fair is fair, right? This isn’t any sort of handout, it’s not gonna add any taxes, it’s literally undocumented students paying the same in-state tuition rate if they qualify under Prop 308, just like any other high school graduate,” said Carolina Silva, executive director of Scholarships A-Z,  a Tucson-based group that helps undocumented students find scholarships.

Silva grew up undocumented herself and was a student in Utah in 2006, when Arizona voters passed Proposition 300. The measure barred non-citizens from accessing in-state tuition and a host of other public services. Today, Arizona is just one of three states with laws specifically prohibiting the local tuition rate for undocumented people. If passed, Prop. 308 would repeal that portion of the old law.

“This would create a huge impact, it would mean that next year, in 2023, the 2,000 undocumented students that graduate from high school this year, are able to take advantage of the in-state tuition, and about 4,000 more who are already going to college would be able to benefit from that as well,” Silva said.

One of those students is 17-year-old Hazel Villatoro, a freshman at Grand Canyon State University. She’s the only one of her siblings who is undocumented. She says her first school choice, ASU, was too expensive for her to attend.

“Definitely for me, it was a struggle, a hustle ... in Arizona, they don’t offer scholarships to undocumented students, so it was difficult,” she said. “We're all very excited about the ballot initiative ... it’s a huge step for all of us, because it won’t just benefit me, but my family and friends and our future generations.”

A similar event is taking place in Phoenix on Thursday.