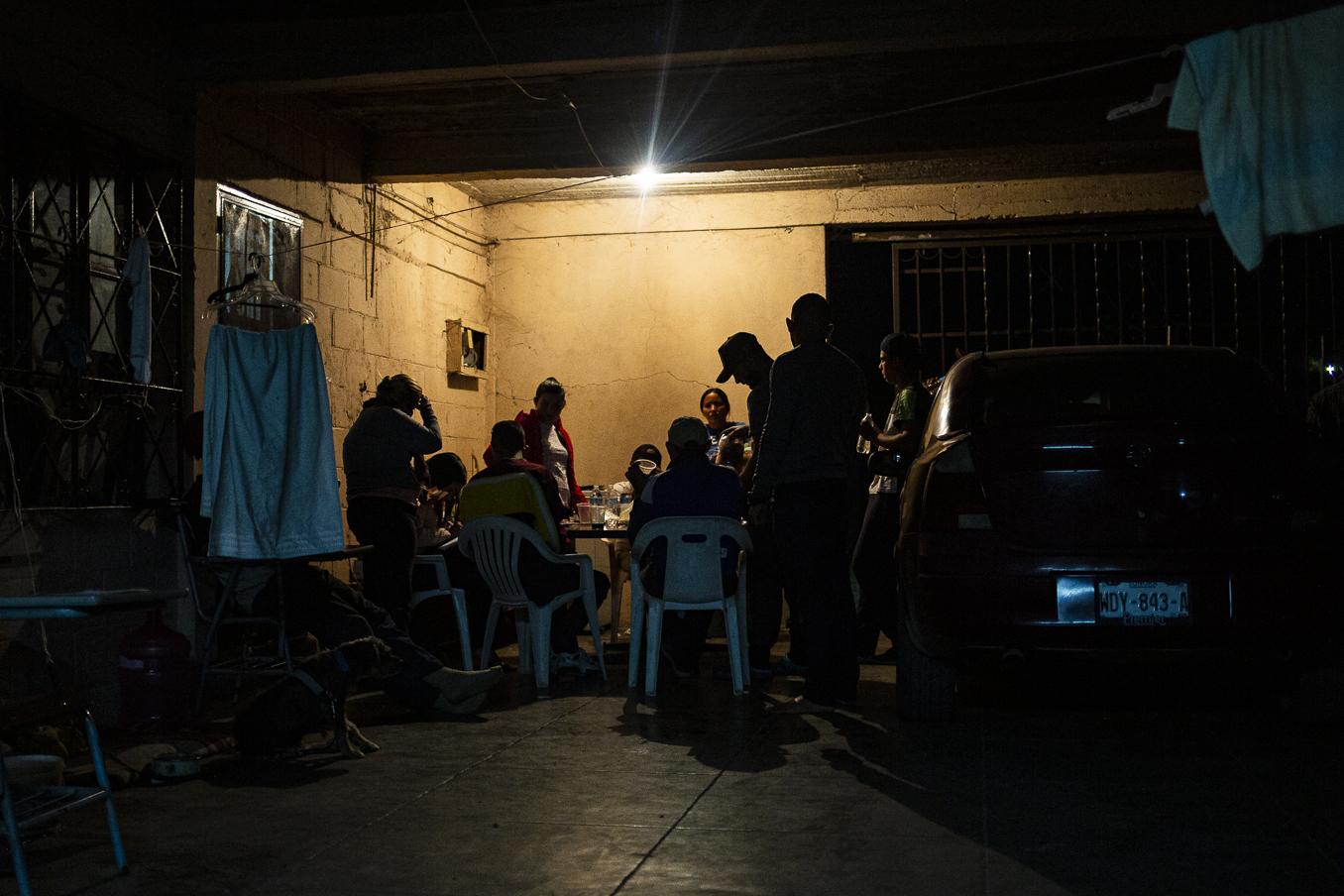 On a cool evening earlier this week, Venezuelan children and their parents were crowded on the sidewalk in front of Hermosillo’s Vida Plena Corazon Contento soup kitchen, which — when the situation demands it — doubles as a makeshift migrant shelter. Its name means Full Life, Happy Heart.

With thousands of Venezuelan asylum seekers being sent back to Mexico in recent weeks — and hundreds to Sonora — the situation very much demands it.

“We crossed through all those countries, we made the effort to get here,” said Janeth Dueñas of her family’s extraordinarily difficult journey, which included a trek through the Darien Gap between Colombia and Panama, a hostile, undeveloped jungle that has claimed many migrants’ lives. “And it was a lost case.”

As tens of thousands of Venezuelans had done before them, they turned themselves into U.S. border officials in mid-October in El Paso, Texas, intending to ask for asylum. But several days before, the Department of Homeland Security had announced a new policy developed in collaboration with Mexico, which now accepts Venezuelans expelled through the U.S.’ Title 42 policy. Nominally a public health measure, Title 42 allows immigration officials to expel would-be asylum seekers before they can begin their process.

Instead of being released into the United States, Dueñas, her husband and daughter were returned to Mexico in Nogales, bused to Hermosillo by Mexican immigration officials and given 30 days to leave the country. Some of their compatriots had as few as seven days.

They spent their first night in Hermosillo on the floor of a bus terminal, and if not for the shelter, one of several in the city, might still be on the streets.

Dueñas said that some Venezuelan officials see those who fled as traitors, and she fears reprisals if they return to Maracaibo, which they left behind more than a month ago. But she doesn’t see staying in Mexico as a viable option either and is holding out hope that U.S. will open the door to asylum again.

“I’m not going (back to Venezuela),” she said. “I’m going to keep fighting here.” 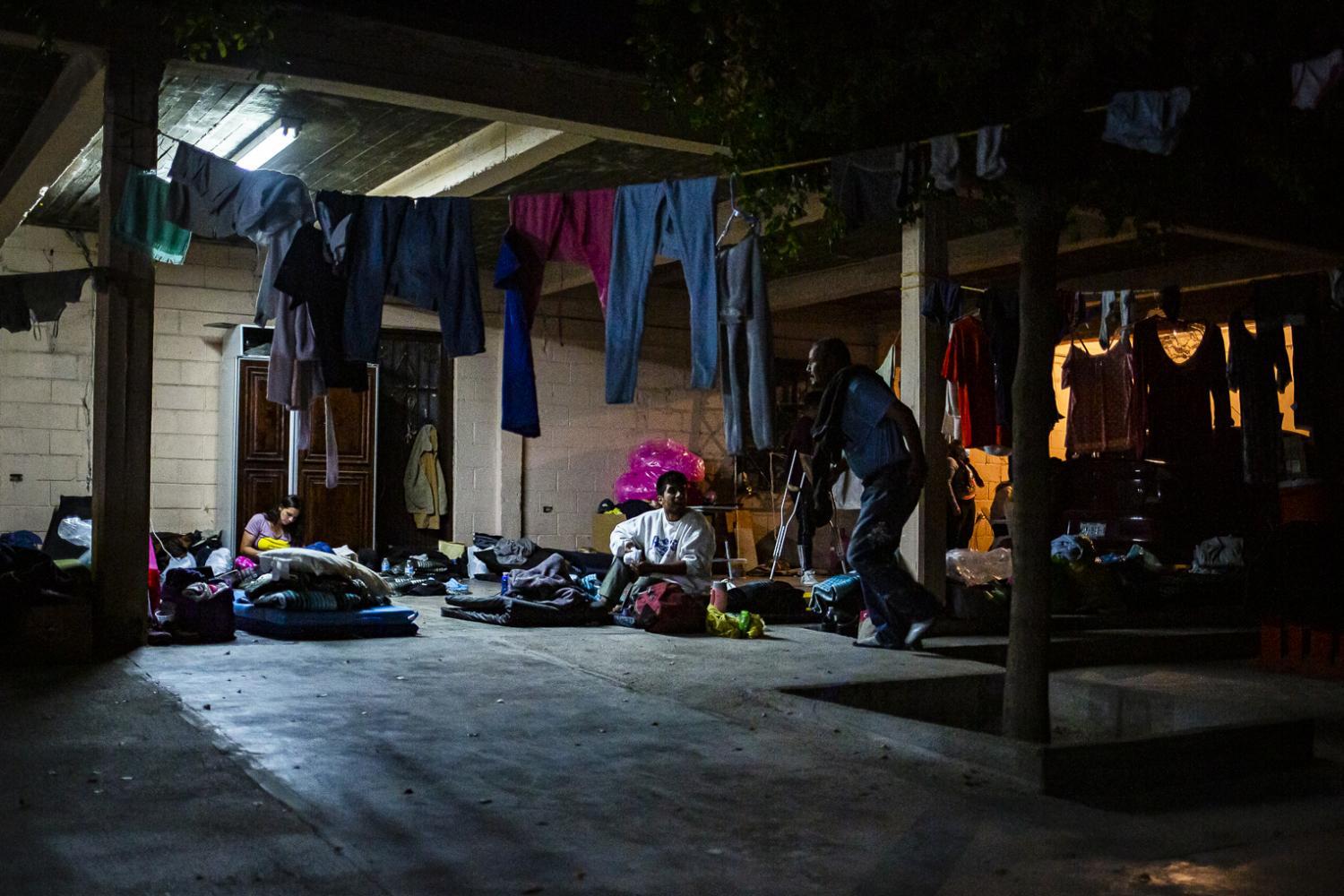 Murphy Woodhouse/KJZZ
Venezuelan asylum seekers get ready to rest after a meal and a long day of work.

The sudden arrival of hundreds of Venezuelans has strained the resources of shelters like Vida Plena. To help pay for expenses — like a spike in gas use — they’re making donuts to sell. Out front, Rogelio Gutierrez, the soup kitchen’s coordinator, gives instructions to a truck driver pulling up with more gas.

In recent days, they’ve had as many as 100 people spending the night there, and that’s on top of the people living on Hermosillo’s streets who they’re still feeding at the soup kitchen.

“For us, it’s more than double the number of people we normally shelter,” he said.

A mobile shower unit donated by a local church has taken some pressure off the facility as they work to provide a dignified place to stay for the Venezuelans. Some of them have found temporary work to support themselves, like helping put up a concert venue at a well-known outdoor food court and event space.

“But yeah, I think the government’s response should have been more robust, with resources,” he said. “I’m not talking about them giving money to me, but one way or another more solid, tangible infrastructure for the proper care of these people.” 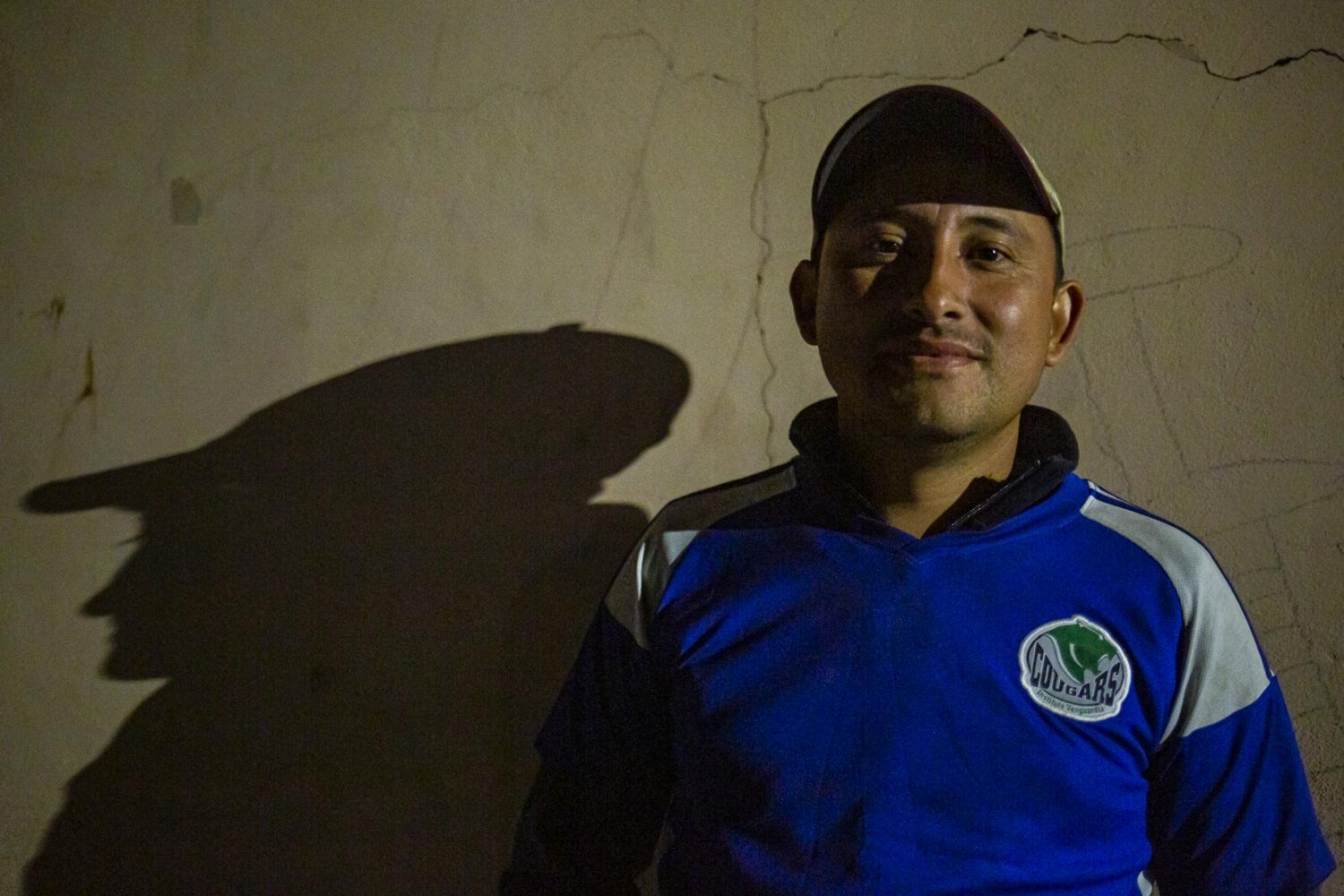 Murphy Woodhouse/KJZZ
Edixon Sandoval has found work in Hermosillo putting up a stage for an upcoming concert. But he doesn't have long-term plans for Hermosillo. "What I really want is to go to the United States," he said. "The majority, practically everybody does."

Last Friday, local, state and federal officials, as well as international agencies, met to discuss how to strengthen the humanitarian response. Stepped up support for shelters across the country is a part of the plan, as is helping Venezuelans who don’t want to return find work and regularize their status in Mexico. In Sonora, Gov. Alfonso Durazo said that a repatriation program for those who want to return to Venezuela is set to start. Some flights have already begun elsewhere in the country.

“It’s strange to me first of all that the Mexican government waited until 10 days after the policy was implemented to hold an initial meeting to discuss how to respond,” said Tyler Mattiace, the Mexico researcher with Human Rights Watch.

He’s been closely monitoring what he calls the “chaotic” rollout of the policy and said the Mexican government should have "one, met the immediate needs of people who were being returned to Mexico, giving them somewhere to stay. And two, it should be giving people clear instructions and information about how to get legal status in Mexico because … many of these people don’t have anywhere else to go.”

He said that few of the many thousands who have been expelled or have yet to arrive at the border will qualify for the humanitarian visa program the U.S. is offering to 24,000 Venezuelans as a part of its deal with Mexico.

“When people realize that they’re not eligible to apply for the program, because they don’t have passports, and they don’t want to go back to Venezuela, what will they do?” he asked.

Gutierrez, the shelter manager, said a large group already set out to cross the border again — but this time to evade capture, not turn themselves in.

“That’s painful to us, because they’re risking their lives,” he said. “It’s a matter of life or death.” 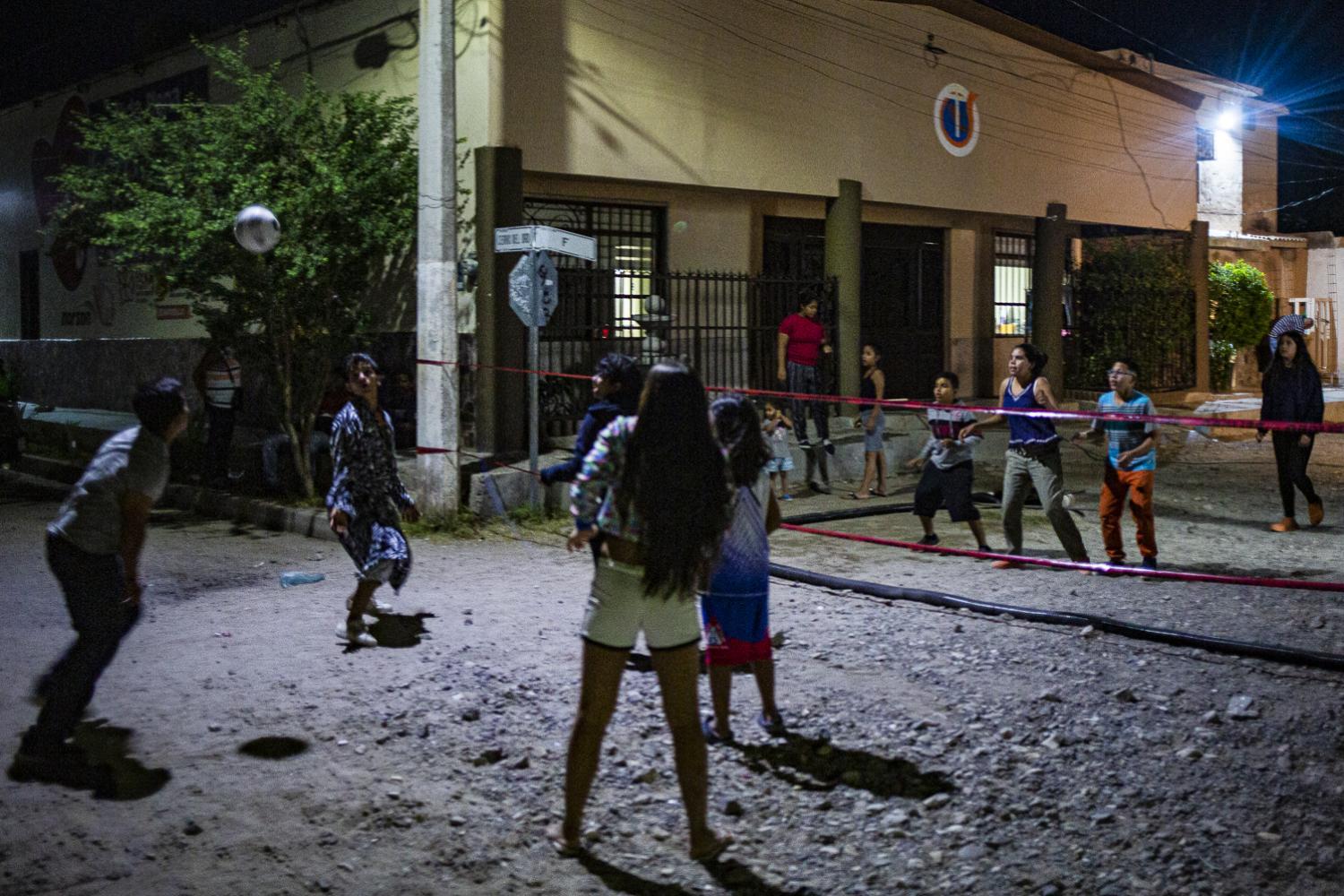 Using barricade tape strung between light posts as a net, a dozen or so kids had a pickup volleyball game going at the shelter.

From the sidewalk, Katiuska Garcia was watching her son Daniel play.

“We thought we had made it,” she said, recalling their arrival in El Paso, only to then be sent to Hermosillo.

They still want to make it to the U.S., but — adrift in this unfamiliar city — they’re unsure of what to do, other than to hope for a policy reversal. They sold many possessions before heading north, she said, and little beyond hardship awaits them in Venezuela.

“What we’re asking, from our hearts President (Biden), is that the door be opened for our children, to be able to work and to give them refuge,” she said.

For now, it makes her happy to think that Daniel — lost in play — has briefly forgotten about what they’re up against.