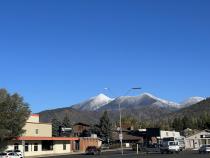 Michel Marizco/KJZZ
Snow crowns the tops of the San Francisco Peaks on Oct. 24, 2022.

Winter weather will descend on northern Arizona this week, with early snow storms expected by Thursday.

Flagstaff and Coconino County just implemented winter parking ordinances and those are coming into effect hours before the first snowfall of the season.

Brian Klimowski is chief meteorologist with the National Weather Service in Flagstaff.

"We’re going to have our first significant winter storm of the season come a bit early here this fall with probably 4-6 inches here in the Flagstaff area," he said.

The area’s first snows don’t usually start until mid-November and the first significant snow of more than an inch is usually late in November.

Parking on some county and city roads is restricted during the snow season. Snow is expected to land at 5,000 feet and above by Wednesday night.