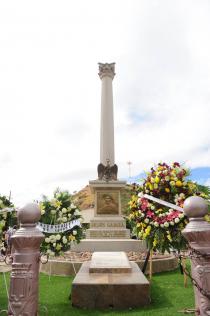 Gobierno de Sonora
The monument for Jesus Garcia in Nacozari

State and local officials paid homage this week to a Sonoran hero who, more than a century ago, sacrificed himself to save a mining town.

Twenty-five-year-old train engineer Jesus Garcia made a decision 115 years ago this week that saved many lives, ended his own and sealed his place in Sonoran lore.

When the dynamite-laden train he was conducting caught fire, he — with the help of a young stoker named Jose Romero — set themselves to getting it as far from the northern mining town of Nacozari de Garcia as possible. At Garcia’s order, Romero leapt from the train to safety before the massive explosion claimed Garcia’s and a dozen other lives.

Sonoran Gov. Alfonso Durazo was in Nacozari on Monday to commemorate the heroic act. He said that the greatness of Garcia’s spirit is the same found in the thousands of men and women who helped forge Sonora throughout its history.

In 1909, the state congress officially added Garcia to Nacozari’s name to honor the man who saved it.