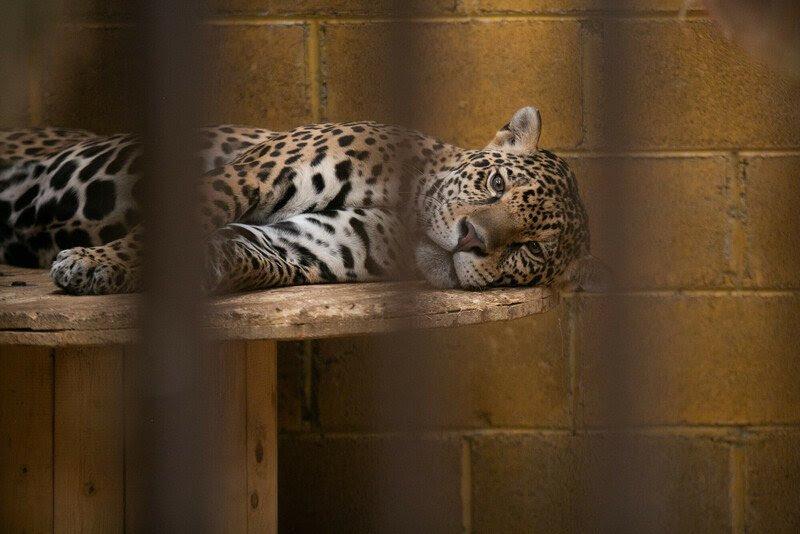 Center for Biological Diversity
Rescued jaguar at a wildlife shelter.

A new report assesses the causes, scope and impacts of growing wildlife trafficking in Mexico, where species like jaguars, sloths, monkeys and lizards are being openly traded — both in public markets and on social media.

The report is the result of four months of undercover investigations, from May through August of this year, which revealed the ease with which wild plants and animals are bought and sold in Mexico.

said Alex Olivera, senior Mexico representative with the Center for Biological Diversity, which released the report this week.

Wildlife trafficking is a threat to species’ survival in the wild, Olivera said. And animals taken from their habitats are frequently mistreated, malnourished and die at shockingly high rates.

According to the report, nearly 80% of captured parrots die — some 60,000 per year. And 80% to 90% of sloths — usually babies violently taken from their mothers and often abused in captivity — die after capture. In one case documented in the report, a seller admitted to investigators that baby howler monkey had likely been captured only by killing its mother, apparently a standard practice.

Many trafficked animals are traded as pets or food. Other species, like the giant totoaba fish, are sold for their parts. The capture of totoaba in the Gulf of California is also the leading threat to the nearly extinct vaquita marina porpoise. Experts believe there are fewer than 10 vaquita left.

Plants, including cactus, orchids and trees, are also frequently trafficked, impacting the ecosystems from which they are stolen.

“Traffickers are basically operating in the open,” Olivera said, adding that with just a little money and a social media account, anyone can readily purchase wild animals in Mexico.

The report details the ease with which investigators were able to find sellers on social media sites such as Facebook, as well as public markets, where wild animals were being sold alongside fruits and vegetables. It also revealed that some legally sanctioned wildlife facilities — like zoos and animal sanctuaries - provide cover for the illegal trade because of lax government oversight.

"The government, the authorities have let this happen for years. Everybody knows that there’s a problem and it hasn’t been tackled," Oliver said.

He added that the Mexican government needs to dedicate more resources to combatting wildlife trafficking, and social media companies like Meta also need to do more to stop the trade on their platforms. The report also recommends public relation campaigns to help people understand the cruel realities behind the demand for exotic pets.

"People need to know the consequences of having these animals in your home," Olivera said.