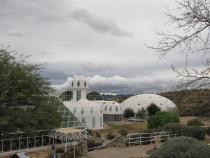 Building an ocean in the middle of the desert. That’s what the University of Arizona is doing in Oracle, Ariz. The Biosphere 2 ocean gallery reopened Saturday with a new exhibit on the Sea of Cortez also known as the Gulf of California.

The three acre glass terrarium changed hands three times before U of A took it over fully in 2011.

Rafe Sagarin manages the 700,000 gallon aquarium called the "Desert Sea." Visitors and researchers will have access to the Gulf of California model complete with living fish and plant life. He said although it is opening to the public, the exhibit is only partly finished.

“Unlike an aquarium or some museums where you know you put up a curtain and close the doors to the public for years while you’re doing a new big exhibit. We’re gonna have it pretty much open as much as its safely possible as we go through this process,” said Sagarin.

Sagarin said the University is using a crowdfunding website, RocketHub, to finish raising the $100,000 needed to complete the exhibit. The ocean gallery is and will continue to be used for research, education and training.