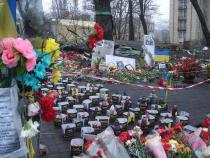 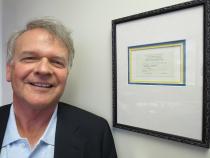 (Photo by Andrew Romanov-KJZZ)
James Huntwork poses next his election observer credentials from the the first time he monitored an election in Ukraine.

Two Phoenix attorneys will travel to Ukraine in May to monitor upcoming elections in the troubled country. Voting is scheduled to go on despite uncertainty on the Crimean peninsula.

Phoenix lawyer James Huntwork first got involved in Ukrainian elections when Mikhail Gorbachev led the Soviet Union. He said the Ukrainian community in the US was looking for someone who could write instructions for the public observation of parliamentary elections in Soviet-held Ukraine.

“So I said, ‘great.’ If you can get me a copy of the Soviet election law, I will analyze it and give you recommendations on how you would go about effectively observing a Soviet election under that statute,” said Huntwork.

Since the country’s independence in 1991, Huntwork and his wife, Patience, have been international observers for four Ukrainian elections. The two lawyers coordinate with other observers to ensure there is no cheating at polling stations.

James Huntwork draws his experience from observing elections in Arizona. He has worked as an election lawyer for the Republican Party and for the George W. Bush and Jon Kyl campaigns. Patience Huntwork is a staff attorney for the Arizona Supreme Court.

James Huntwork said his work has given him keen insight on the Ukrainian people.

“What they want to do is have a country that’s just normal, that’s based on the rule of law, where elections are held and conducted the way they’re supposed to be, where the legislature adopts laws that allows people to form companies and do business honestly without having to bribe administrators or members of the government in order to create wealth or do business,” said James Huntwork.

Despite the ongoing conflict, he said the elections should still happen.

“What the Russians are doing is an outside influence that is not under anybody’s control,” said James Huntwork. “But if the Ukrainians have their way, they’re going to have an election on May 25, and I’ll be there to observe it.”

The Huntworks' flights and hotels are already booked.