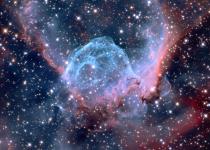 (Photo by Adam Block - Mount Lemmon SkyCenter/University of Arizona)
A photo of the "Thor's Helmet" nebula, released on Jan. 3, 2015.

The University of Arizona space programs turn out some stunning photos each year — and Time magazine has taken notice.

Five photos from UA made the magazine's annual list of "Best Space Photos of 2015." Three of the images selected were taken by astrophotographer Adam Block of the Mount Lemmon SkyCenter.

"Having the images published in such a well-known and well-read place such as Time magazine is extremely rewarding, because I hope to share my passion for astronomy and the world around us through these images," said Block.

Block, manager and program coordinator at the SkyCenter, said his images are an important part of getting the public interested in UA's space research.

"We use these images to offer perspective. These pictures — they have a much greater reach," Block said. "They're a larger form of sharing."

Block has been photographing space for the past 30 years. He has been featured by NASA's "Astronomy Picture of the Day" and won the "Hubble Award" from the Advanced Imaging Conference in 2012, among other honors.

Check out all the UA photos that made Time's list.