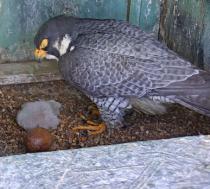 A breeding pair of peregrine falcons made their nest atop a Maricopa County building on Third Avenue and Jefferson Street earlier this spring. Their first egg hatched on Mother's Day at 7 p.m., according to a release from Arizona Game and Fish Department.

The baby falcon, called an eyass, can be seen live on a camera set up by Game and Fish. The livestream, which was relaunched this year with new equipment, is a partnership between the department and Maricopa County.

There are no plans to name the baby bird.

"We don't name them because we don't want to anthropomorphize them. They are not pets; they are wildlife," said Arizona Game and Fish spokewoman Lynda Lambert.

The pair laid four eggs in March, but two cracked. Officials say the remaining egg could hatch at any time.

The Peregrine Cam in Phoenix is the second livestream maintained by Game and Fish. A webcam featuring sandhill cranes in southern Arizona went online in January.