US Officials: Fire Season Already Off To Troubling Start 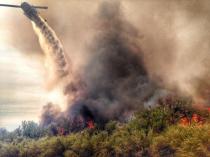 After 2015 went down as the worst year on record for fires, the nation’s top agricultural and forest officials met today to discuss what may be in store this year. They feel the fire season is already off to a troubling start.

U.S. Forest Service Chief Tom Tidwell and his boss, Agriculture Secretary Tom Vilsack, met with regional officials to discuss plans and preparations for what they call a “worrisome” wildfire season to come.

Ominously, so far in 2016, five times more acres have already burned than at this time last year.

Jessica Gardetto of the National Interagency Fire Center said conditions are ripe for history to repeat itself.

“We’re hoping that this doesn’t happen again this year, but there is a potential because there are a lot of areas that are still experiencing drought, including California," said Gardetto.

Fire officials say Arizona has about another month in the danger zone before monsoon season kicks in.

Global warming is seen an increasing factor. Sixteen of the most historically significant wildfires have occurred over the past decade.