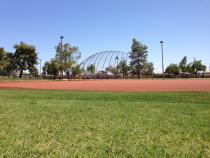 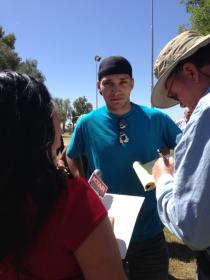 A baseball field will be named in honor of a Mesa police officer who was killed last Monday. A wrong-way driver hit Sgt. Brandon Mendoza near U.S. 60 and Interstate 10.

Police officers, city officials and residents gathered at Guerrero Rotary Park in Mesa to honor Mendoza. He had worked to revitalize the park and make it a safe place for kids to hang out.

James Pinkerton grew up two blocks away. He says his neighborhood was nothing but drugs and homeless people. Pinkerton says he was struck by how genuine Mendoza was.

“He is the first officer to actually care. I’ve been around all the officers and I’m not trying to talk bad, but you know what, he was the first one to say 'James, how are you today?' And he actually knew me by my first name. And that’s what really got me,” Pinkerton said.

Pinkerton says he had weekly talks with Mendoza in the park ever since he met him four years ago. Pinkerton says Mendoza’s kindness has inspired him to become a police officer.