Why Are Phoenicians, Who Get 14 Hours Of Sun In Summer, Vitamin D Deficient? 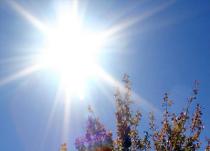 An excessive heat warning remains in effect for the Phoenix Valley. And with the arrival of the summer solstice, we’re getting more than 14 hours of sun exposure each day this week. Yet, Phoenicians remain relatively deprived of one of the sun’s primary nutrients, vitamin D.

But one Valley doctor says it’s more than just sunscreen keeping the vitamin D out.

“I think this weekend, everyone just stayed inside, it was so hot out," said Dr. Elissa Gartenberg, an osteopath in Old Town Scottsdale. Summer here is similar to northern winter climates, where people stay inside because the weather is bad. The older we get, Gartenberg said, the less our skin is able to absorb the vitamin D.

“There’s other groups that are high risks — obese patients — people who take certain medications, [like] anti-seizure medications or barbiturates, patients who are hospitalized or are unable to get out into the natural sunlight," she said.

According to a 2006 study from the CDC, one quarter of U.S. adults are at-risk for Vitamin D inadequacy. Whereas historically, Vitamin D was used to prevent softening of the bones, Gartenberg said it's now known vitamin D deficiency affects the immune system and increases the risk of infection.

But if you have a deficiency, Gartenberg said the sun is not the most recommended source of vitamin D. Instead, stock up on natural and fortified foods like mackerel, salmon, milk, soy milk and cereal.

EDITOR'S NOTE: This story has been modified to correct the spelling of Dr. Elissa Gartenberg's name.