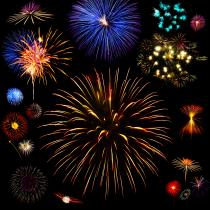 It’s the busiest time of year for Fireworks Productions of Arizona based in Chandler. From Friday, July 1 through Monday, July 4, the company is scheduled to shoot 87 displays across the state, including 55 Monday.

The company has six full-time employees and only four can shoot fireworks.

Kendon Victor is the company’s planning specialist and he relies on dozens of temporary workers to pull off all the shows.

Victor says some are small business owners, some work in IT, some in the healthcare field – all share a passion.

“They like to play with fire,” he said. “They go through the training. They spend years shooting on someone else’s show. They rise up to the level of head pyro.”

They get to shoot fireworks a few times a year at schools, weddings, and sporting events, but this holiday is the biggie.

“We’re going to be shooting over 30,000 fireworks probably over the 4th of July,” Victor said.

“We try to educate them on the idea of saying they have  a big, long show is nice but if the pace isn’t exciting then it becomes boring and people aren’t really enjoying it,” he said.