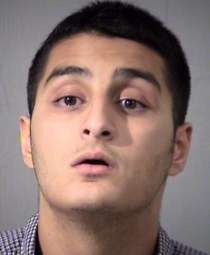 The Tucson man accused of plotting terror in Arizona, has entered an initial plea of not guilty. The self-described “American jihadist” is due in front of a judge next week.

Mahin Khan, 18, was arrested last week at his home on charges of conspiring to commit acts of terrorism in both Pima and Maricopa counties.

The Arizona Attorney General’s office said he attempted to obtain assault rifles and pressure cooker bombs for a “martyrdom operation.”

On Thursday, an indictment was unsealed alleging that Khan pledged his allegiance to the Islamic State group and sought those materials from them for a possible attack on an Arizona Motor Vehicle Division office.

An attorney acting on Khan’s behalf entered the initial plea of not guilty today. He’s due back in Superior Court to appear before a judge on Tuesday.