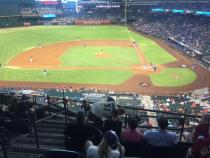 (Photo by Phil Latzman- KJZZ)
A sparse crowd greets the Diamondbacks at a home game on July 20, 2016. Arizona has one of the worst home records in baseball at 17-35. 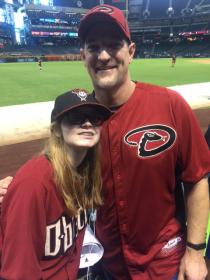 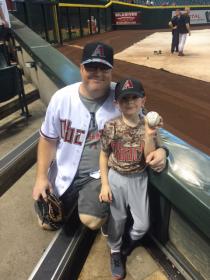 (Photo by Phil Latzman- KJZZ)
Terrell Sheline and his son Gabriel Sheline get autographs before the game.

The Arizona Diamondbacks have been one of baseball’s biggest disappointments this season.

After a series of off-season trades and signings, the team was expected to contend. So far in 2016, just about everything that can go wrong, has, with home fans bearing the brunt of the losing.

KJZZ's Phil Latzman headed to a ballgame to see why.

It’s a Wednesday matinee in July in front of a sparse crowd at Chase Field. The last place Diamondbacks are finishing up a home stand against the Toronto Blue Jays. Barely two minutes into the game, a home run rockets straight into the park’s signature swimming pool in right-center field.

The cheers aren’t coming from the home fans. They’re coming from fans of the visiting Blue Jays, as Toronto slugger Josh Donaldson’s opposite-field splash puts them ahead 2-nothing.

This short sequence represents the Diamondbacks season in microcosm. Arizona goes on to lose the game, 10 to 4, for 35th loss in 52 home games this season.

“It’s frustrating. You want to see the team win. You want to see a little home dominance," said Duane DePhillips, who came to the came with his 15-year-old daughter Alecia, who quickly diagnoses the DBacks biggest problem.

“They’re doing okay," Alecia said. "Their pitching is kind of off.”

Win or lose, Terrell Sheline is here with his 5-year-old son, simply for the love of the game.

“Nah, they’re not winning a lot at home, but you’re fan," Sheline said. "I grew up in the Valley and I’m a fan of all the home teams. You just kind of stick with it. ”

Many fans haven’t been as faithful. The D-backs set record lows for attendance earlier this season and as they sink deeper in the standings, so do their prospects of attracting more fans like the Shelines.

“We’ve got fickle fans here. Once the D-backs turn it around attendance will go for them and there will be a lot more hometown fans," Sheline said.

Nick Piecoro has covered the Diamondbacks for the Arizona Republic for the past eight seasons and is also Valley native. “I think there were a lot of high expectations around here. I think everyone thought they’d be a playoff team or certainly a team that would be in the hunt until late in the year," he said.

He said the trouble has also been off the field. The team’s front office generated bad publicity with their stated desire to get out of the lease at Chase Field earlier this year.

“They’ve had a lot of things go poorly," Piecoro said. "I think the stadium stuff at the beginning of the year was a black eye for these guys.”

Piecoro also believes Diamondbacks management is also guilty of over-billing a team that wasn’t ready to compete. The sportswriter doesn’t blame fans for giving up on the team.

Season has been 'frustrating for everyone'

The disappointment is palpable in the players clubhouse.

“I think it’s been frustrating for everyone," said veteran relief pitcher Josh Collmenter. "All the promise coming out of spring training, everything was clicking there and that was a glimpse of what we thought we’d have this season. "

That promise was due to off-season moves that yielded starting pitchers Zack Greinke and Shelby Miller.

Greinke, who signed a $206 million free agent deal with Arizona, has lived up to his billing as one of the game’s best pitchers, but has been out nearly a month with an oblique injury.

Miller, however, has been a total bust. Acquired in the off-season for two top prospects and outfielder Ender Inciarte, he was recently sent down to the minors after starting
the season with a 2 and 9 record.

”Unfortunately, you need both sides of the ball to lineup, both pitching and hitting and it seems like when the pitching's gone well, we haven’t scored runs and vice versa." said fellow veteran relief pitcher Daniel Hudson. "It’s not for a lack of trying or talent in this room. It just hasn’t worked out the way we thought.”

'We are truly trying our best'

Hudson said he knows it hasn’t been easy for D-backs faithful to endure or afford.

“It’s tough for people to justify spending their hard earned money and it’s totally understandable," Hudson said. "Hopefully, the fans that do come out the next two and a half months should know that we are truly trying our best to win ballgames.”

But they’ll be okay if there are more fans like Duane DePhillips.

”It’s going in the right direction," DePhillips said. "It’s taken a little longer than us fans really wanted to believe in, but it’ll get there.”

The good news for the Diamondbacks?

They have a winning record on the road this season, where they’ll be for the next week and a half starting a 10-game road trip in Cincinnati tonight.

EDITOR'S NOTE: This article has been modified to reflect accurate statements made by Diamondback fans.