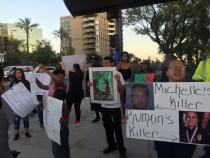 (Photo by Will Stone - KJZZ)
Protesters gather at Camelback Road and 24th Street in Phoenix on July 15, 2016.

(Jimmy Jenkins - KJZZ News)
On July 8, hundreds turned out in Phoenix to protest as part of the Black Lives Matter movement. One example of people's elevated reactions to policing.

Here in the Valley, while there have been protests, things have remained mostly peaceful when protesters and police have clashed in the streets of Phoenix.

"The point of doing demonstrations is to disrupt," said Rashad Shabazz, an associate professor at ASU’s School of Transformation "The killing of unarmed black men and women is no longer acceptable."

He has been closely watching as younger, multiracial people get involved in rallies and protests.

"It was really, new Phoenix, if you will," Shabazz said of the crowds.

"That energy needs to be bottled up into organized political engagement."