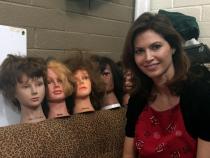 (Photo by Heather van Blokland-KJZZ)
Kara McAllister, a hairdresser who purchased her salon in 2013. 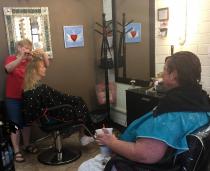 Google "recession-proof businesses" and you get the typical results: funeral parlors, sin services— you know, liquor, cigarettes and the like. And beauty care.

That’s been true for every recession, until this last one in 2008. Bouncing back from the Great Recession is still slow going, eight years later.

For example, Cindy Hatcher always budgeted something for herself.

“I work. I’m a working woman," Hatcher said. "And I feel I deserve something for just me, so one of the things I do is my hair. And I also get my nails done.”

Six years ago Hatcher lost her job and had to go without. She said she couldn't justify spending money she didn't have on her hair or on herself at all. It wasn't until more than nine months later when she found a full-time job with benefits that she returned to the salon.

This also marked a difficult time for salon owners like Kara McAllister.

"I paid my dues," McAllister said. "I was willing to work for it. I went to night school. I worked a full-time job. I had a whole different career outside of hair."