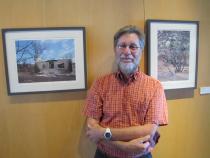 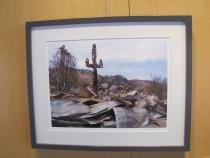 (Photo by Steve Shadley)
A photo by George Berke shows a burned out metal Saguaro and piles of metal from a building destroyed in the Yarnell Hill Wildfire on June 30, 2013 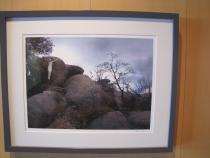 (Photo by Steve Shadley)
A photo by George Berke shows Jesus Christ on the cross on the edge of the Yarnell Hill Wildfire.

Almost a year has passed since the 19 Granite Mountain Hot Shots were killed in a wildfire near Prescott. The aftermath of the blaze has been captured in a series of color photographs now on exhibit in Phoenix. The photographer hopes his images will help people deal with the emotional scars from the Yarnell Hill Wildfire.

George Berke was working for the Arizona Republic when he was assigned to go to Yarnell to document the damage left behind by the fire. He didn’t arrive at the scene until nearly a month after it was put out.

Berke has some previous experience covering natural disasters. Nearly a decade ago, he was shooting photos for the Times-Picayune in New Orleans when Hurricane Katrina hit. But Berke said he’s still floored by the devastation he saw in Yarnell.

"The ground is black, the trees were black, everything was black," Berke said. "It’s pretty bleak.”

You won’t see any photos of the memorials for the 19 firefighters who lost their lives that day. Berke said he wanted his work to focus on what the fire did to the town of Yarnell. One of his photos shows a cow skull burned in the flames that destroyed a home.

"There’s this black recognizable thing that has two open eyes glaring at you,” Berke said.

Only inches away from the skull are some sprigs of green grass growing in the ashes.  Berke said it’s symbolic— proof of life after death in the wake of the Yarnell fire.

Another photo showed the image of a holy cross next to a clump of boulders on the outskirts of town.

"It just sort of seemed to signify where the fire encroached into Yarnell and it’s kind of what the cross is showing," Berke said. "It’s half burned and the other half isn’t burned."

He said he met some of the people who lived in the 120 homes and buildings the fire destroyed in Yarnell. He said some of them were eager to share their experiences.

“There were just so many emotions," Berke said. "There was pain and anger and just uncertainty about what to do next, but I think what changes you is you realize the resilience of people. That terrible things can happen to you but you can bounce back.”

An exhibit of George Berke's photos “The Yarnell Hill Fire 25 Days Later” is on display at the Burton Barr Library in Phoenix through August 12.