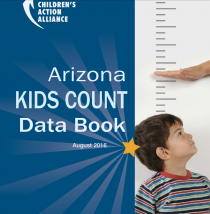 Every election year, the Children’s Action Alliance releases its Kids Count Data Book to take a look at how Arizona children are faring – from poverty levels and safety, to education and violent crime.

“We need to know what the conditions are like for kids in Arizona and how we can do things better to improve what is in place and what’s sorts of public policies are going to make a difference for them,” said Pati Urias, communications specialist with the Children’s Action Alliance.

According to Urias, there are some signs of improvement in our state, but, Arizona still has a long way to go in protecting children.

One of their main concerns that came out of this report is that the rate of kids living in poverty has gotten much higher, according to Urias.

“Fifty-one percent, so more than half of the kids in Arizona are in low income families,” she said. “And that’s a concern because we know that there are a number of other factors that are affected by that particular benchmark.”

She said educational attainment is one of those factors. The report found high school graduation rates have stalled, and there are low preschool participation rates.

There were also some good signs. The report found that the rate of young people arrested for violent crimes dropped by a third, and the number of babies born to mothers without a high school education went down in 12 of Arizona’s 15 counties.

The data book analyzes information from 2009 to 2014 in Arizona, a five-year snapshot during the Great Recession and the year after in which the country began to emerge from it.

“It’s a sign that a lot of families are considering what kind of a home am I going to be able to provide for a child?” Urias said.

They also found that the percentage of kids in foster care went up 87 percent in this five-year period. And, according to Urias, that could have some serious long term affects.

“Foster care is not something to be taken lightly. It does impact a child’s life in ways that are definitely very profound,” she said. Kids who are removed from their homes often have trouble in school, and find it difficult to adjust to a normal life.

“Is there way to prevent that? Or, bring that number down by providing support services to families that would enable them to keep the children in the home?” Urias asked.

According to the Department of Child Safety, most reports to the child welfare hotline are about neglect. So, Urias said, if our state spent more money on prevention services to help families, they might be able to keep their children at home.

For example, Arizona’s maximum unemployment insurance is the nation’s third lowest, and K-12 spending here is two-thirds the national average, according to the Children’s Action Alliance. They'd like to see higher a reimbursement rate for child care centers and more low-income working families benefiting from child care assistance.