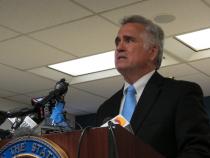 (Photo by Carrie Jung)
John Huppenthal publicly apologized Wednesday for comments he made under a pseudonym on a political blog.

Arizona's Superintendent of Public Instruction John Huppenthal publicly apologized Wednesday for comments he made under a pseudonym on a political blog. Despite calls for him to do so, Huppenthal also announced that he has no immediate plans to step down.

Huppenthal said he was sorry for several comments he made on the Blog for Arizona website, some of which included calling those on public assistance lazy pigs and comparing Mexican-American Studies programs to the KKK.

Several community leaders are calling for the superintendent’s resignation, including Lawrence Robinson, a local attorney who is on the governing board of the Roosevelt School District in Phoenix.

Robinson added that if the superintendent doesn’t resign, voters should kick him out.

And not everyone was convinced of Huppenthal’s sincerity, including Blog for Arizona writer Bob Lord.

"I think what he’s really sorry about is that he got caught, because just three weeks ago he was defiant," Lord said. "He dared us to air his comments."

Huppenthal’s press conference ended emotionally on Wednesday. He left the event in tears after being asked if he considered the toll his words had on others.