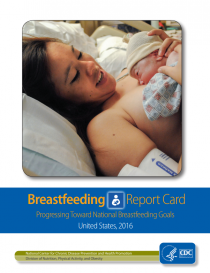 (Photo by Centers for Disease Control and Prevention)
The Breastfeeding Report Card was released Aug. 22, 2016.

More Arizona moms are breastfeeding their babies, but work still needs to be done to meet Healthy People 2020 goals, according to a report from to the Centers for Disease Control and Prevention (CDC) released Monday.

The CDC has been tracking breastfeeding rates in the United States since 2007 in an effort to promote the benefits and improve public health. Statistics are also used to assess progress in the Healthy People 2020 initiative, "the latest science-based, 10-year national objective plan developed that serves as a roadmap for improving the nation's health."

Data from the CDC's 2016 Breastfeeding Report Card shows that 85 percent of Arizona babies born in 2013 have been breastfed at some point in their lives — a 3.4-percent increase from a 2014 report. That's nearly 4 percent above the national average, and Arizona's rates are higher than the national average in all but one category.

Although Arizona's overall rate hasn't changed much in the past decade, the numbers reveal more kids are breastfeeding for a longer period of time. Babies being breastfed at 6 months and 12 months, as well as babies being breastfed exclusively at 3 and 6 months, are all at their highest rates yet.

The largest increase was in babies being breastfed exclusively at 6 months old, which has risen 9.5 percent. However, that's still 1.7 below the 2020 target. So far, Arizona has met two of the five breastfeeding rate goals for Healthy People 2020.

Here's a look at all the Arizona data, starting with babies born in 2004.