Fallen Feathers A Refuge For Birds In Need

Download mp3 (6.36 MB)
Stina Sieg/KJZZ
(Photo by Stina Sieg - KJZZ)
Longtime volunteer Brian Shae is visiting Jack, a hawk with one eye. They became buddies after Shae spent months chopping up mice for Jack and cleaning out his cage.
(Photo by Stina Sieg - KJZZ)
Fallen Feathers cares for countless baby birds during spring and summer, like this baby love bird found in Scottsdale. Think it's cute? Because it can't be released, it's up for adoption - when it grows up a bit.
(Photo by Stina Sieg - KJZZ)
Jody Kieran has been rehabbing birds for the better part of two decades. She takes in anything in need, from owls and hawks, to pigeon and sparrows. She even has an emu. He's named Kevin. 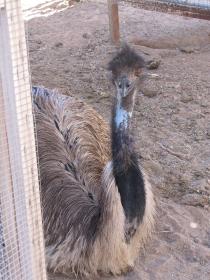 (Photo by Stina Sieg - KJZZ)
Kevin the Emu was found wandering a West Valley neighborhood. After being captured by the police, he settled into his new home at Fallen Feathers.

Jody Kieran can trace her bird rehab career back to one moment, nearly 20 years ago. The mother of six had recently released a curve-bill thrasher into the wild. The small, native bird was the first she had ever nursed back to health. It was around then that an organization she had contacted for advice asked her if she could help with a few more birds.

She still can’t totally explain why. Seventeen years later, she doesn’t know how many are living in and out of her home in North Peoria.

“Yes, they are kind of everywhere,” she said, not really joking.

Kieran was sitting at her kitchen table, which is also sort of the focal point for Fallen Fathers. The nonprofit bird rehab facility is licensed and well known in the Valley, but still incredibly intimate in scale. Sometimes Kieran will be performing surgery here in the kitchen or quarantining sick birds in her bathroom. She estimates she takes in 1,000 birds every year. It’s as big a job as it sounds.

“From sun up to sun down, we need to be putting something in one end and taking care of something that comes out the other end,” she said, matter-of-factly.

Baby birds, for example, need to be fed every 15 to 20 minutes during the day. Kieran knows that takes a special person.

"Not everybody wants to have frozen mice in their freezer,” she said.

But that’s what happens when you take in every species of bird. Fallen Feathers is a rare breed in the rescue world. Many organizations specialize in one species. Or just focus on wild birds. Or exotic birds. Kieran says many won’t take invasive species like pigeons or starlings.

This anti-discrimination policy can actually be controversial in the rehab world. But Fallen Feathers is all about fiercely defending birds.

Assistant director Kay Aufill said that yes, they do carry diseases, but many of them can only be spread to the same or similar species.

Kieran lives on more than an acre, but it can feel tight with so many feathered guests. Outside, a group of quail scurried around one cage. A raven looked down from its perch in another. And an emu named Kevin lounged in his pen. Kieran pointed out a baby owl, his legs covered in downy, white feathers. His tiny horns were just barely sprouting above his intense, round eyes.

“Um, these are predators,” she said. “These are mean, killing machines. It’s not cute. This is a killing machine. You definitely don’t want to snuggle this type of an animal.”

It can be hard, but Kieran said she never lets herself forget that these are wild animals. They are not pets, and she believes it’s her job to help them be what they’re meant to be. But of course she gets attached.

She’s not the only one. Brian Shae was 16 when he first started coming here, four years ago.

Shae was the one who cut mice for Jack and cleaned out his cage. Then, he went to college. He’s now on summer break — and decided to visit his buddy. Shae’s one of about a 100 volunteers who are dedicated but who come and go as they can at Fallen Feathers.

Kieran said her organization is always just getting by, somehow.

They have to, Kiernan stressed. It’s not like there’s a Humane Society for birds. Kieran would love a large facility, with regular staff and more than just donations to get by. But for now, she’s got her backyard.