We're Not In Texas Anymore: Bridging Borders Through Barbecue In Mexico City 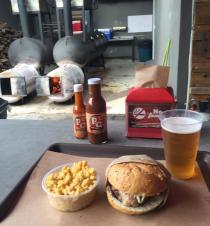 ***DISCLAIMER: A curse word in Spanish is included in this article.***

MEXICO CITY — For a lot of Americans, there’s nothing quite like barbecue to bring friends and families together. But for a former manager of Apple, barbecue became a way to reinvent himself and to serve as a connection between the United States with Mexico, with a brand so unusual we couldn’t even say its full name on the air.

The restaurant is called Pinche Gringo. Depending on your translation, it could mean something like “darn American,” or worse, in Spanish. But Dan DeFossey, one of the two owners, explains that it’s just a nickname. He said it shows humility and empathy with Mexican hearts and palates.

“We grow up with this American exceptionalism that America is the best country in the world, but when you come here, you have to shut that [down], because there are different ways and different ideas in both cultures,” said DeFossey, a former core member of Teach for America.

His restaurant stands like a bastion of Americana in the middle class neighborhood of Narvarte, in Mexico City. It resembles a sprawling Texas food patio with wood benches and tables.

The centerpiece is the kitchen: a vintage 1976 Airstream Trailer. DeFossey and his Mexican business partner, Roberto Luna, drove it from Austin, Texas, to Mexico City about four years ago.

DeFossey, a Columbia graduate and a New York native, had decided to quit his position in management for Apple in Mexico to reinvent himself. With Luna, he opened the restaurant after realizing that the majority of the inhabitants of Mexico City knew about American barbecue only through movies and TV.

“We had no experience in the culinary market, no training, and I don’t think we needed it. We just needed to believe in what we were doing, think hard about the customer experience and offer something really fun,” he said.

The restaurant is one of the pioneers in the new wave of American-style barbeque joints flooding Mexico. DeFossey remembers opening the place with only $200 in his pocket. Nowadays, they sell around 3,500 pounds of meat every week.

“Our goal here, in this restaurant, is to promote a very authentic American culture and Mexicans can come and understand it more,” explains DeFossey.

During a meeting, like a mantra, DeFossey tells his employees “Una sonrisa es contagiosa”— a smile is contagious, a great way to connect with their customers.

Eighteen young people from Mexico work here. They follow the restaurant’s philosophy of breaking barriers of all kinds.

“Food is an international language. We have a border, but we are not that different,” said López, referring to the U.S.-Mexico relationship. “You put barbecue sauce on your meat, and we put salsa on the meat. I wish that the message could be more powerful through food, but it’s a start.”

DeFossey agrees, referring to the restaurant as a foundation on which to build a better understanding between the Mexican and American cultures — especially in what he calls “the Trump era”, where walls and barriers are such a big issue.

And as a way to connect both cultures, DeFossey and his partner organize events such as a Fourth of July Celebration, St. Patrick’s Day, a Mexican Independence Day party and even a stand-up comedy show ... in English.

In the shows, politically correctness is left behind. Even the American owner of the restaurant becomes a punchline for comedian Alex Fernández.

“His partner Roberto is not that popular because he’s Mexican,” said Fernández.  “I love Dan and what he’s done with this business, what any other American would do: open a successful business, hire some Mexicans in the kitchen, keep all the money ... but in Mexico, that’s great,” making the audience crack up.