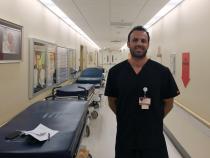 “Hello!” Majd Alfreijat said as he pulled back a curtain and walked into a tiny patient room in St. Joseph’s Hospital’s Emergency Department. “I’m Dr. Alfreijat here, the medical doctor.”

“They told me you came here with some left leg infection?” he said, examining a man’s swollen calf.

“How did this happen?”

He had been in a car accident a few weeks ago, he said. He came back to the Emergency Department when his leg continued to get worse.

Alfreijat continued the examination, asking the patient a series of questions, and told him they’d need to admit him to the hospital so they could give him antibiotics through an IV until his leg improved.

Alfreijat is an internal medicine physician here, which is essentially a general practitioner for patients who come to the emergency room and need to be admitted for further care at St. Joseph’s, he said.

“You deal with everything,”Alfreijat said.

Internal medicine physicians are primary care providers that we don’t have enough of in Arizona.

Statewide, there is a shortage of doctors. Right now, Arizona needs more than 400 primary care physicians in Arizona to fill the state’s needs and more than 200 psychiatrists, according to the Arizona Department of Health and Human Services.

St. Joseph’s, in Central Phoenix, is an under-served area of the state, where there aren’t enough doctors to serve the number of people in need.

“A lot of uninsured people … we get a lot of people from the shelter,” Alfreijat said. “Versus somebody who’s practicing like in Scottsdale, its’ a completely different population.”

That’s why Alfreijat is here. He’s one of 30 physicians a year in the state who can be granted what’s called a J-1 Visa Waiver. They’re foreign doctors who qualify for this federal program and agree to work in an area designated as a Health Professional Shortage Area or a Medically Under-served Area for at least 3 years.

And, for Alfreijat, it’s opened some important doors.

“Medicine is definitely the best in the states, in terms of all the new research, the training is the best,” he said. “I wouldn’t have the same opportunity should I have stayed in Syria.”

The program is part of the National Interest Waiver Programs. When a doctor has completed her commitment, she can either go back to her home country for two years, or get a sponsoring employer to get them a work authorization permit, according to Ana Roscetti, workforce section manager with the Arizona Department of Health Services (ADHS).

She oversees several programs that are trying to bring in doctors to these areas and into these fields.

The health department administers a tuition reimbursement program for doctors and advanced practice providers, like nurse practitioners and mental health providers. So, if a doctor commits to working for two years in an under-served area, he can get up to $65,000 of their student loans paid, she said.

ADHS also oversees a visa program for foreign doctors who are willing to work for at least 3 years in one of these areas in need.

Alfreijat has worked in Phoenix for three years now. In just a few weeks, he said he’ll be able to apply for his green card. But, he said the whole time he’s never felt all that foreign here.

“I think people overall are used to foreign doctors,” he said. “If you’re good, you prove that you’re good, they don’t – it doesn’t matter where you’re from.”

And, with a war raging in Syria, he said he doesn’t have much of a home to go back to. All of his family has left the country now.

Alfreijat is planning to do a fellowship next, hopefully in Tucson at the University of Arizona. And, he said, he feels like he’s been able to make a real difference here, in his adopted country.

Last month, he said a family came in with their father, who was suffering from dementia.

“We can’t do a lot in terms of treating the disease itself,” he said, “But you can do a lot about educating the family, letting them know what’s the prognosis, how this disease is going to progress.”

Often, nobody’s ever taken the time to explain it to them, he says. So, he did.

“It doesn’t have to be a big thing,” he said, “I’m not a surgeon, I don’t do big surgeries. But, it’s simple things sometimes.”