Preservationists Fight To Save Old WPA Building On AZ Fairgrounds 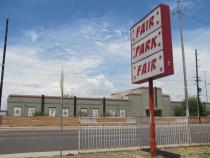 (Alexandra Olgin/KJZZ News)
The WPA building on the Arizona State Fairgrounds is scheduled to be demolished Wednesday.

A WPA (Works Progress Administration) building at the Arizona State Fairgrounds built in 1938 is scheduled to be demolished Wednesday. Preservationists are fighting to keep the building.

Kristi Walsh with the Arizona State Fair said the fair is a self-supporting state agency and it can’t afford to spend the nearly $1 million needed to repair the building.

“The roof leaking, the foundation buckling the massive termite infestation and the wall deterioration we can’t even use it for storage anymore," Walsh said. "So unfortunately the building has gone beyond its useful life."

Local preservationists got word of this last week. Bob Graham is a historic preservation architect. He has been trying to rally public support to save the building.

“We’ve been focusing our efforts on trying to get the attention of the governor’s office because our understanding is that Governor Brewer has the only ironclad way of stopping with an executive order,” said Graham.

Graham disputes the assessment of $800,000 to fix the building. He evaluated the structural engineering report that the repair estimate is based on and said the estimate is inflated. He said it isn’t necessary to bring the building up to modern building code standards.

He said he could reduce the cost it would take to save the building by only doing repairs to bring it up to the historic building code standards. But Walsh said the demolition is an economic necessity. She maintains the agency values historic buildings and is working to save those on the fairgrounds that are usable. The fair plans to use the land the building is on to rent out to vendors.