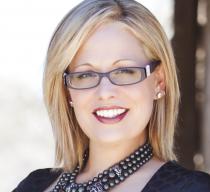 (Photo courtesy of U.S. House of Representatives)
Kyrsten Sinema is the current representative of the 9th Congressional District.

Tuesday was the deadline for congressional candidates to disclose how much money they raised over the past three months. Two challengers have been significantly out-raised by the incumbent they hope to unseat, and two candidates for an open seat are neck and neck.

Republicans Wendy Rogers and Andrew Walter will face off in August’s primary election. The winner will go on to challenge Democrat Kyrsten Sinema, who represents the 9th Congressional District.

Walter’s most recent filing with the Federal Election Commission shows him with $220,000 on hand as of June 30. According to the Rogers campaign, she has $387,000 in the bank.

Sinema is far ahead of her would-be replacements. Her FEC filing shows her with nearly $1.6 million on hand.

In the 7th Congressional District, Democrats Mary Rose Wilcox and Ruben Gallego are seen as the frontrunners in the race to replace retiring Congressman Ed Pastor. FEC documents show that as of June 30, Wilcox reported $221,000 on hand and Gallego reported having $300,000.