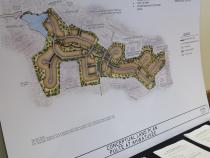 (Steve Shadley/KJZZ News)
A map of the new home development the Pulte Group has proposed for the Ahwatukee Lakes Golf Course. 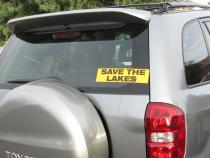 (Steve Shadley/ KJZZ News)
A "Save The Lakes" bumper sticker on the back of a vehicle of parked at a public meeting about the Pulte Group plan for development at Ahwatukee Lakes. 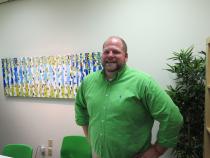 A developer wants to build more than 250 homes on top of an Ahwatukee golf course that closed more than a year ago, but it won’t be easy.  The Pulte Group has to convince thousands of people in the neighborhood to change deed restrictions that prevent the land from being used for anything but golf.

The owner of the Ahwatukee Lakes Golf Course on the south side of Phoenix said he was losing money so he shut it down in May of last year. Now the property is up for sale and the Pulte Group wants to buy the golf course so it can build a planned community with ranch-style homes and open space.

"It’s a very difficult situation now that golf is no longer a viable option or an economical option,” said Jacque Petrolakis with the Pulte Group.

People who live in the neighborhood complain the golf course is an eye-sore because the owner allowed the grass to die and drained the lakes. But, Petrolakis is confident the Pulte development will boost property values in this part of Ahwatukee.

"The homes that we are building we know are above the price point that existing homes are selling for in that area,” Petrolakis said.

The Pulte Group is asking residents near the golf course to sign consent forms that would allow it to amend deed restrictions so new homes can be built. It must get more than half of the 5,100 property owners to agree and Petrolakis said it’s important to get those signatures quickly.

"There are other buyers in line that are interested in this property. The seller has informed us there are commercial buyers and multi-family buyers, apartment buyers,” Petrolakis said.

Pulte is holding a series of meetings so Ahwatukee residents can learn more about its proposed development.

At this recent get together, the cicadas are buzzing outside of the meeting hall where local golfers have gathered to share stories about their neighborhood. Ben Holt’s home sits at the edge of the twelfth tee where the new homes would be built.

"It’s a par four," Holt said. "If you hit a really nice drive, nice and straight, there’s a berm and the ball will go over the berm and into the lake, I can attest to that.”

Holt is with Save The Lakes, a group that opposes the development. The Pulte Group has promised to invest $1 million to improve a club house at another Ahwatukee golf course if residents approve the deed changes. Holt is skeptical.

“It’s clearly a bribe, and my answer to that is if in fact Pulte’s plan is so good why do they have to bribe anybody?” Holt said.

Pulte wants to build 2.5 homes per acre but opponents said that’s too crowded. Linda Swain bought her home in 1984 and said she paid an additional $26,000 for a direct view of the golf course. She’s urging her neighbors not to support Pulte’s plan.

“We have CC and Rs to protect us and the only way to keep that land a golf course or open space is to uphold them," Swain said.

She doesn’t think Pulte can convince 51 percent of the residents to agree to the deed changes. One legal analyst said Pulte may be facing some other challenges.

"There is some case law in Arizona that came out a few years ago that would suggest when you are trying to make a fundamental change that completely changes the relationship between the owners and the entity in the CC and Rs that you’d need 100 percent approval of all of the members,” Wood said.

Pulte must get Phoenix City Council to approve zoning changes so new homes can be built at the golf course. Pulte officials hope they can start construction in the next year or so.