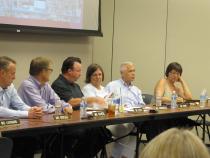 A Works Progress Administration building at the state fairgrounds may be getting a chance to avoid demolition. On Wednesday, the Phoenix Historic Preservation Committee voted in favor of a motion to consider a historic preservation overlay on the fairgrounds area.

The motion passed the committee unanimously.

The state fair officials who were there said the building’s disrepair was a major factor behind the decision to tear it down.

"The building as it stands and as it has stood is not a revenue generator," said Wanell Costello, the organization’s deputy director. "We believe that being able to gain that space does bring us huge potential for revenue."

Costello said without the building the space could generate about $80,000 to $100,000 per fair. She adds the agency cannot afford to spend the nearly $1 million needed to bring the building up to code.

But preservation advocates say that figure is an overestimate, adding that fixes to bring the structure up to historic building code standards would amount to much less.

Vince Murray is a historian with Arizona Historical Research. He said he’s pleased with the committee’s decision because to him the building represents the only tangible connection the city has to the services provided by the WPA.

"I’m hoping that this gives us some traction and it keeps moving forward," said Murray. "There is no reason this building has to go down. There is none. They did not make a convincing argument."

State fair officials say they’ll delay demolition until at least July 23 due to the terms in a court order that was issued Tuesday night.