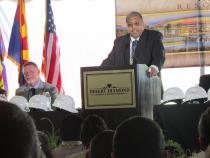 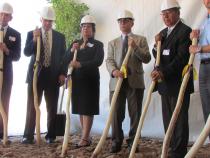 The Tohono O’odham Nation broke ground on its West Valley Casino on Thursday. Contractors estimate the entire project will be completed within three years.

In lieu of shovels, officials used eisakud, or traditional tribal planting sticks, to move the first bits of ground.

Ned Norris is the tribe’s chairman. He said despite some outstanding legislative and legal opposition, he feels confident in the decision to move forward with construction.

"Obviously the legal challenges that have been put in front of the courts, every single legal issue that has been raised by the opposition has been dealt with by the courts," he said. "I mean you weigh those decisions against the opposition, it makes sense. It makes sense that we move forward now."

Since being proposed five years ago, the project has faced significant pushback. Some opponents contend a 2002 compact limiting gaming development in the Phoenix area should prevent construction.