When Carolina Contreras turned 7, her naturally curly hair was relaxed for the first time.

Her mom would apply the relaxant chemicals to Contreras’s hair every few months and she’d sit for hours under the dryer with her hair in rollers to set the style.

Contreras was born in the Dominican Republic but spent most of her adult life in Boston.

“Most importantly, I think I did it because I was so ready to embrace all of me,” Contreras said.  “I loved my skin and I loved my skin color and I  would look in the mirror and be very proud of being a woman of color.”

Pelo malo literally translates to "bad hair," and in the Dominican Republic, the word is tied to hair that is kinky, curly, afrolike or coarse.

Contreras has a counter argument: “My hair has not killed anyone, it’s not corrupt. It doesn’t steal from people.”

The prevalence of the phrase helps explain why when Contreras started her natural hair exploration there were few resources to care for natural hair in Spanish.

People would stop her in the street and ask how she took care of her curly locks. So she started to document her journey in a blog called Miss Rizos (rizo means curl in Spanish).

“Consider missrizos.com your support group where you can read about the experiences of other Dominican, Latina and African-American girls and their transitions,” reads the first entry in Spanish.

Contreras documented her travel, her styles and experiments with new beauty products — some of which she made herself.

“I started just putting everything in my kitchen in my hair and that wasn’t a great idea, but it was fun.”

The change also made her reflective. Her straight hair, had brushed past her shoulders, her new style was short and cropped close to her head.

“I would look at myself in the mirror and I would be like, ‘Who the heck is that looking back at me?’ She looks weird and she looks not a feminine as she did with the long silky hair.”

Contreras’s writing launched a salon with the same name as her blog. Today, Miss Rizos is a place where women cut and care for natural hair in Santo Domingo’s historic Zona Colonial.

A chalkboard behind the front desk reads “Welcome to your new home,” in Spanish.

“I wanted people to come in and really just feel zen and feel at peace with our hair,” Contreras said. 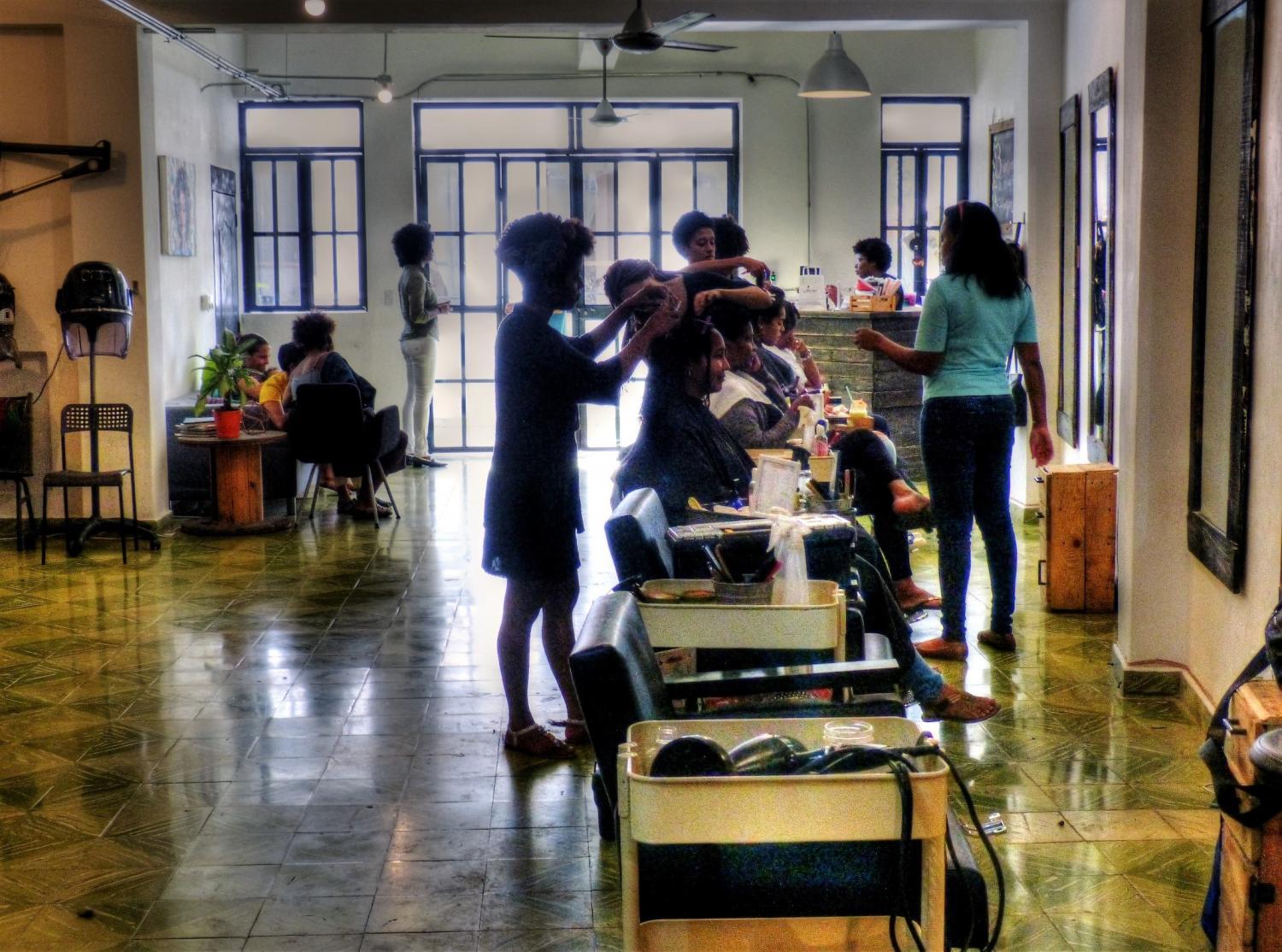 (Photo courtesy Rick Lewis)
Miss Rizos is credited with being the first hair salon in the Dominican Republic to focus on caring for natural hair without harsh chemicals or heating elements.

There isn’t the chemical smell of hair dyes and you can order a green smoothie or a cocktail during your appointment.

Dody de la Cruz brings her daughter Meilani to Miss Rizos. Her own hair is curly.

“We visited Miss Rizos salon to experiment have and live through the experience of natural hair,” de la Cruz said in Spanish.

Meilani loves her curly hair and her Facebook is full of photos that prove it.

“It feels free, attracts attention and people like it,” she said.

But on this particular day, Meilani’s hair is pulled back in a tight ponytail. De la Cruz said there was an incident at school recently.

“The teacher told her, if you come with curly hair, you cannot enter my class,” de la Cruz said.

“It’s hard because she didn’t accept that it feels free to wear your hair how you like it,” Meilani said.

This kind of discrimination is not unique.

Contreras wrote she was once turned away at a bar because of her textured style. The story went viral and the bar apologized and fired the person who denied her entry.

Contreras wants to change the way Dominicans think about natural hair. She’s starting young, giving workshops at schools and summer camps to break down the beauty standards girls see in the media.

(Photo by Mariana Dale - KJZZ)
Carolina Contreras translated her message of self love into the slogan "Yo amo mi pajón." Pajón is a voluminous plant, but used as slang in the Dominican Republic to refer to big hair.

Contreras calls herself an activist and considers her hair a part of her culture, her identity. She’s proud of her blackness — a word that not many people embrace in the Dominican Republic.

So she translated her message of empowerment and self love into “Yo amo mi pajón.” Pajón is a slang word for big hair.

“I think it was more powerful for me to teach people to love their pajón then to love their afro, or to love their blackness,” Contreras said.  “It’s something that’s in people’s language and it’s also sending the message and the message is still strong, to love yourself just the way you are.”

Contreras eagerly points to her youngest customers, who are now growing up outside the stereotypes.

They want to be models and actresses, they think their hair is beautiful and super chevere — super cool.

Nashla Alaya Peralta Garcia, 12, with her curly hair freshly styled, explained it this way: “It’s that for me, bad hair doesn’t exist."

Music in the story by Lee Rosevere.