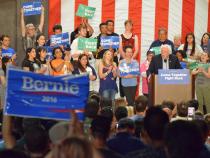 In the runup to the 2016 election, Arizona was seen as a potential battleground state. Democrats had high hopes of turning the reliably red state blue. Then Nov. 8 happened and those hopes were dashed.

Donald Trump carried the state, Sen. John McCain held onto his Senate seat, and the GOP retained control of the Arizona House as well as Congress.

Sen. Bernie Sanders told a crowd of several thousand supporters at the Mesa Amphitheater that party leadership was to blame for the losses in Arizona and across the country.

“The current process by which the Democratic Party does business is a failed process. We need change. We need real change," Sanders said.

Sanders stumped on many of the same causes he campaigned on in his presidential run, including raising the minimum wage, providing free college education and reforming the criminal justice system. Sanders criticized Democracts for losing focus.

“The Democratic Party must stand up for working people in every state in this country including Arizona," he said.

Sanders said Democrats need to represent all 50 states not just the East and West coasts and focus more on protecting the working class.

He encouraged those in attendance to remain vigilant saying change would only come from the grassroots.

The Vermont senator lost Arizona to Hillary Clinton in the Democratic primary in 2016, but Sanders is now polling as the most popular politician in the country.