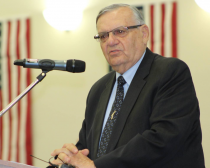 Arpaio is being tried for criminal contempt for ignoring a 2011 court order to cease his immigration enforcement patrols.

Department of Justice attorneys argued that Arpaio would attempt to politicize a jury trial.

On Friday, the 9th Circuit denied the appeal, saying the petitioner had not demonstrated that the case warrants the intervention from the higher court.

A bench trial is still set to begin June 26. Arpaio faces up to six months in jail.