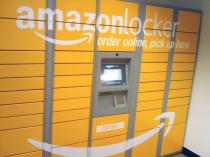 (Photo by Tony Hirst - CC BY 2.0)
Amazon Lockers are secure locations for packages to be delivered and returned.

Amazon is the world’s largest retailer, and part of why that is comes from businesses pitching their ideas to them. One of the nation’s largest apartment rental companies, based in Phoenix, did just that two years ago with a concept called Amazon Lockers, which is now spreading nationwide.

Valley-based Mark Taylor was the first in the country to use the lockers on a rental site. Now it houses lockers in 37 of its Arizona complexes. Company vice president Chris Brozina says it made good business sense to try to land Amazon as a partner, as apartment rental demand continues to grow in the Valley and more and more people are shopping online for everyday goods.

Amazon already has added lockers throughout the U.S., including an announcement that it is rolling them out at its newly acquired Whole Foods stores.