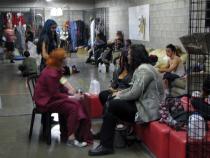 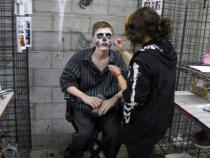 (Jimmy Jenkins/ KJZZ News)
An actor becomes a zombie in preparation for his shift at the 13th Floor Haunted House.

It’s still a few weeks before Halloween, but haunted house season is in full swing. At an old Albertson’s in North Phoenix a group of young ghouls are warming up for their nightly performance.

The former supermarket is now home to the 13th floor, one of several Halloween-themed destinations that have popped up around town.

Kyle Sicard is the 13th floor operations manager. He leads the group in a rehearsal to prepare them for a grueling five-hour shift that they’ll repeat every night through the end of the month. He likens the scare circle to the preparations for a broadway show.

“Ours are a lot more specialized because we do a lot more intense vocals, a lot louder, we do screeches that really reverberate in the vocal box and that tends to really cause some stress," Sicard said.

This is a far cry from Disney’s Haunted Mansion. Haunted houses these days have evolved into more of an interactive theatrical performance where patrons roam graveyards and insane asylums while encountering zombies and deranged mental patients.

Sicard said to get a really good scare you need to invoke all of the senses.

“Audio is a really important part, because if you have a character that’s just moving, you’re not really going to get the full effect of what the creature is," he said. "So you really want to hear to know what you’re looking at.”