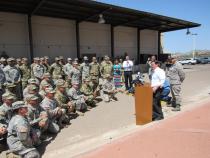 Arizona will send 338 National Guard members to the Mexican border on a support mission dubbed Operation Guardian Shield, which the governor said will be paid for by the federal government.

Officials planned to deploy 225 Arizona National Guard troops from Phoenix on Monday. An additional 113 will travel to the border on Tuesday.

RELATED: National Guard Troops Are Coming To The Border, But Are They Needed?

Gov. Doug Ducey addressed part of the force at Papago Park Military Reservation. He plans to work with federal officials to decide how long the National Guard stays at the border.

“This mission is about providing manpower and resources to support federal, state, county, tribal and local law enforcement agencies in stopping the flow of criminals, narcotics, weapons and ammunition that is being trafficked into our state,” Ducey said.

Despite drops in apprehensions of undocumented immigrants over time, Ducey said March saw a surge of unauthorized border crossings and illegal activity.

“The people that are suffering the drug overdoses, often times these products are coming over the border and through our state,” he said.

Ducey supports finishing a wall on Arizona’s border with Mexico, but stopped short of saying the National Guard should build it.

“This (deployment) isn’t specifically around a border wall,” Ducey said. “But it certainly is about border security.”