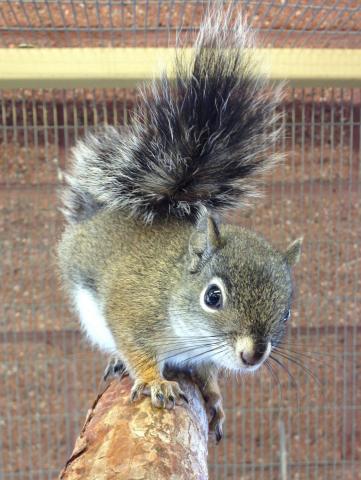 A squirrel at the Phoenix Zoo is showing signs of pregnancy, exciting scientists because there are only about 35 Mount Graham red squirrels left in the world. As Arizona heads into wildfire season, concerns remain due to the vulnerability of the endangered animal.

The eight-inch-tall rodents are highly territorial and unique because they create large mounds of pinecones, mushrooms and other food that can be two feet deep and twice as wide.

“They don’t hibernate for the winter so they need a food source,” said U.S. Fish and Wildlife Service biologist Marit Alanen, who leads the recovery effort for the red squirrel.

These food mounds are called middens and are quite prominent on the landscape, according to Alanen.

“It acts as a food source, not just for the red squirrel but for other creatures that are there as well,” she said. This would increase the environmental impact if the squirrel goes extinct.

The squirrels only inhabit a 600-acre region of southeastern Arizona and are the only Arizona-specific endangered mammal. This time last year, scientists were worried about the Mount Graham red squirrel because there were only about 252 of them in the wild.

Then on June 7, 2017, the Fry Fire devastated thousands of acres of forests east of Tucson. After the flames died down, scientists could only find 35 surviving Mount Graham red squirrels.

Additionally, the fire destroyed hundreds of middens, leaving the squirrels vulnerable to starvation.

Officials from the Fish and Wildlife Service, University of Arizona, Phoenix Zoo and Coronado National Forest sprang into action.

Food sources were placed throughout the landscape, monitoring programs were funded and the Phoenix Zoo received additional backing for a red squirrel breeding program.

“The Mount Graham red squirrel breeding biology is definitely one of those tricky puzzles,” said Ruth Allard, who works on the conservation program at the Phoenix Zoo. 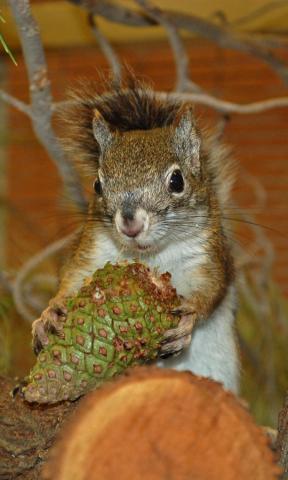 Because the squirrel has to defend their midden and territory in the wild, field biologist thought there was only about an eight-hour period one day a year where the squirrels are open to breeding, said Allard.

Additional research at the Phoenix Zoo showed the squirrels actually have slightly more frequesntl hormonal cycles, about every 25 days. Allard is hopeful this means more opportunities to save the highly endangered animal.

“So that’s something we’ve had to do quite a bit of behavior research on,” she said. “Just because their hormones show they could be fertile doesn’t mean the squirrels are open to spending time together.”

Even if the number of red squirrels increases, there are questions over whether there is enough habitat left to support a larger population.

This summer, the Fish and Wildlife service is partnering with the University of Arizona to analyze aerial footage of the Mount Graham area.

“But it’ll take years before those areas have trees of sufficient size again,” Alanan said.

Some environmental activists, however, think more urgent steps need to be taken. The Center for Biological Diversity is petitioning the U.S. Department of the Interior and other agencies to expand the area protected habitat.

Arizona is heading into another high-risk fire season. Thanks to a dry winter and high winds, the U.S. Forest Service has already issued multiple warnings.

“We are in the process of developing a contingency plan right now,” said Alanan.

EDITOR'S NOTE: This story has been updated to clarify the hormonal cycles of the squirrels.